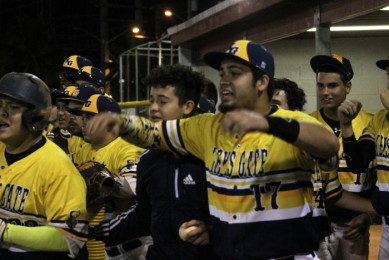 Keys Gate players celebrate after taking the lead in the seventh.

District rivals Keys Gate Charter and Key West faced off Friday night in front of hundreds of fans, and the teams did not disappoint. While it was not a cleanly played game, it was not short on excitement, and in the end it was Keys Gate that came away with a 5-3 win in 5A-16.

The game itself served as a bit of foreshadowing, as the two teams were already in line to meet in two weeks in the district playoffs. With Gulliver Prep already securing the top seed in the district, the focus on Friday night was to send a message before the two teams meet again in districts.

“It’s always great to see when the guys battle in an environment like this,” said Keys Gate Manager Rich Benevides. “We know we are going to see them again in a few weeks, and we know that will be another tough game. Tonight I am just proud of the way the guys kept coming back.”

Early on, it looked like that message would be delivered by Key West. The Conchs jumped out to an early lead, and had starting pitcher Hunter Sellers cruising through the first five innings, allowing no runs while scattering four hits.

Once the starting pitchers came out, however, the see-saw battle began. 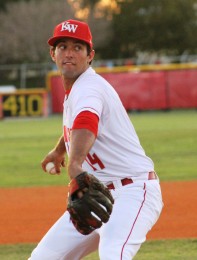 In the sixth inning, the Knights took their first lead of the game. Osmany Haya led off with a single, and Emmanuel Antonio was hit by a pitch from reliever Kyle Snow. A second hit by pitch loaded the bases and Rich Benevides tied the game at one with a single to right field. A double play groundball brought in the second run of the inning, and gace Keys Gate the lead.

“Rich has been doing that well all year, taking the outside pitch to right,” said Benevides.

Although the Knights gained the lead, the fireworks were just beginning.

Key West immediately sucked the life from the Knights by retaking the lead in their half of the sixth. Sellers and Snow started the inning with back to back singles. After Mathew Harrington executed a perfect sacrifice bunt, Randy Garcia doubled, giving the Conchs a 3-2 lead.

In the seventh, Knights lead-off hitter Brandon Espinal reached on a bad-hop single. After a failed sacrifice bunt, Alan Quezada was hit by a pitch. The next play provided a turning point, when a seemingly game-ending double play turned into an error, and left Keys Gate with another chance. Antonio then delivered a two-run single past a drawn in infield, giving the Knights a 4-3 lead. They would add on one more in the inning.

“I was just thinking that I needed to come through for my teammates there,” said Antonio, of his game-winning base hit.

When reliever Emmanuel Perez shut the door in the bottom of seventh, the Game of the Week win went to the Knights. One of the players responsible, Sanchez, explained what the win meant.

“We battled tonight,” said Sanchez. “We have to continue to have that type of approach because we are going to see these guys again in two weeks. Tonight we kept coming back. My approach was to just throw strikes and mix up my pitches, and I felt good early.” 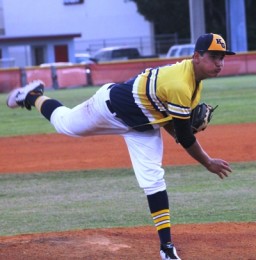 For Key West, it was another in a line of late-inning losses this season. While the young Conch squad has exceeded most expectations with their 15 wins, Manager Ralph Henriquez knows these growing pains are part of the game.

“When you have a young team, you have to let them play through their mistakes and tough situations,” said Henriquez. “These are guys that are part of our future plans here, and we have to give them the confidence and work through these difficult times now, so they will learn and be better later. There is a lot of pressure on them with the history of teams and titles we’ve had here in Key West, and they have to learn to embrace that pressure.”

While the game was lost on this night, Henriquez believes there could be better times ahead.

“Anything can happen in a one-game playoff, and that team will be ready to play again in two weeks,” he said. “Hopefully tonight serves as a late-season lesson for our guys and they will bounce back and be ready also.”