Miami Springs Comes Back From Early Deficit To Beat Mourning 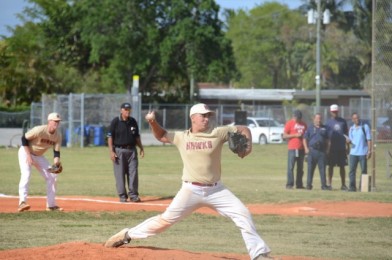 Orlando Borroto captured the win for the Hawks.

The Miami Springs Hawks hosted the Mourning Sharks in a district semifinal on Tuesday afternoon at Miami Springs. The Hawks fell into a hole early in the first inning, but bounced back quick to eventually win the game 9-2, earning a place in the district championship game.

After the first inning, it was all Hawks from there as they put up nine total runs. Ricardo Alvarez began the bottom of the second inning with a hit and walk, which then led to a double by Yadel Abreu that scored them both. Yadel then advanced to second and then came in to score thanks to a couple of wild pitches.

In the third inning, they were able to score another run off the bat of Edrik Gonzalez, who drove in Alvarez. The fourth inning was the big inning for the Hawks as they scored five. The five runs came off the bats of Alvarez, Torres, and Gonzalez, with the help of a few passed balls.

The first two runs of the game scored in the top half of the first inning. Jim Varona started the inning off with a walk that then led to base hits by Billy Carson and Marcel Guardarrama. Max Liff then stepped into the box with bases loaded. He sat back and drove one for an RBI single, scoring Varona.

“I was just trying to make contact and hit the ball,” said Liff. “I didn’t make great contact, but good enough to score a run.”

Carson then came into score for the second run of the inning when Michael Mendez got hit by a pitch.

Sharks manager Edwin Bonilla was not happy with the way the season ended for his team. He believes it was a tough year, and that the district may soften up next season. He just knows that his team must stay focused to get to the district championship next season.

“I was very disappointed with this season,” said Bonilla. “Some of our players had great seasons, but as a team we were disappointing. We had a rollercoaster season, but hopefully we can come back stronger next season and make it further.”