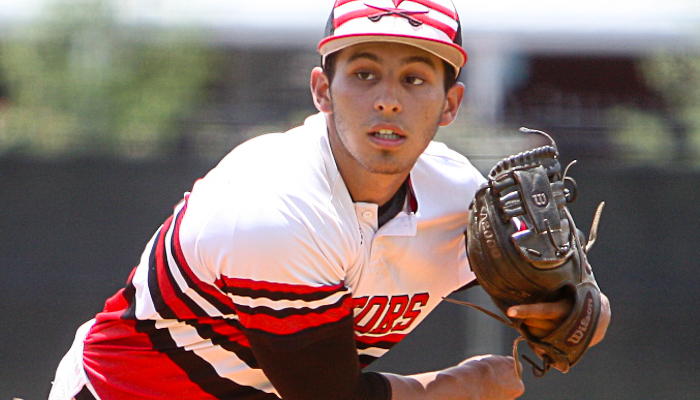 Victors pitcher Chris Otero threw a one-hitter on Thursday in a 10-0 win over Lake Worth Christian.

Senior pitcher Chris Otero threw a five-inning one-hitter and Miami Christian shortened the game with a six-run fifth inning for a 10-0 win over visiting Lake Worth Christian in a 2A regional quarterfinal on Thursday afternoon.

Otero struck out the first four batters he faced and five of the first six en route to a seven-strikeout game. He allowed just two base runners. Lake Worth Christian’s Vinnie Picardi reached on an error in the second inning, and Jossel Sylvanie got the only hit of the game for the Defenders (12-11), a lead-off single in the fourth inning.

Otero retired the final six batters he faced to send the Victors (13-9) to next week’s region semifinals at Santaluces Sports Complex against Trinity Christian Academy.

“I was just trying to keep throwing strikes and keep the ball low, so they don’t hit,” Otero said of his outing. “My arm felt nice and loose. I threw mostly fastballs with a curveball once in a while. I was hitting my spots. I had my command on today.”

It brought an end to the season for a Lake Worth Christian program still in the building process.

“So we know we’re building a project. We know we’re building it the right way. We’re young in all the key places we need to be young, and we’ve had great senior leadership. We’ve gotten this far because of our senior leadership. So we owe a lot to those guys going out. But I’m very, very excited to get back to work already, tomorrow if they’d let me.” 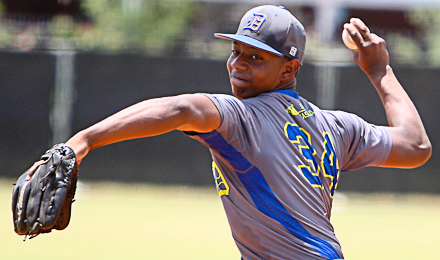 Defenders pitcher Rovinel Mathilda brings it to the plate in Thursday’s regional quarterfinal.

Miami Christian put the pressure on its visitors from the beginning, scoring twice in each of the first two innings before blowing it open with four hits and six runs in the fourth.

“Everything came together, the boys had good energy,” Miami Christian manager Chris Cuadra said. “We’ve been working hard all year long and it’s finally coming together. We’ve been a streaky team all year. Some of it was injuries, but we stuck together and it’s paid off.”

Senior Ernesto Perez was one of three Victors with multiple-hit games. But he couldn’t decide which he was more proud of; his two hits, three RBIs, two runs scored, or the stolen base.

“All of it,” Perez said through an interpreter.

Perez drilled an RBI double in the first inning to score Aldo Ripley with the game’s first run. He later scored on an error to give the Victors an early 2-0 lead. Ripley crossed the plate three times for Miami Christian.

Perez punctuated the fourth-inning rally with a two-run single, chasing home both Ripley and Orlando Ribalta (2-for-3, RBI) another member of the multi-hit club.

Perez said his approach at the plate was simple; “See ball, hit ball,” he said.