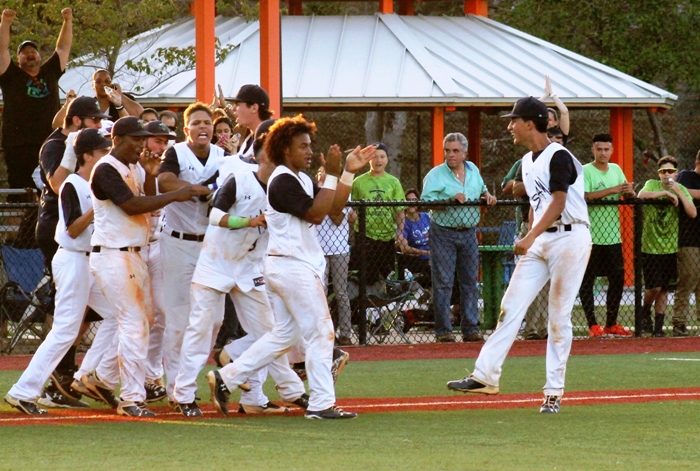 The Titans celebrate with teammate Andres Santana, who led the comeback rally.

No matter how it had to be done, Andres Santana was willing to do it that way. With his SLAM team down to its final outs and behind by a run, the Titans right fielder had a runner on first and they needed to move him over. But the first swing belonged to him.

Santana jumped on the first offering and drilled it to the right-center field fence, allowing courtesy-runner Alex Rodriguez to race all the way around from first base with the tying run. Chauncey Nunez dropped a textbook bunt to move Santana to third base and a wild pitch brought him home to give SLAM the 2-1, walk-off victory over Westminster Christian in a 4A regional Thursday at Gibson Park.

“Last year we were in this position and now our guys are a year older and more mature,” SLAM manager Alfonso Otero said. “I always talk to the guys that they’re never out of a game offensively. I tip my hat to that pitcher; he stifled us for six innings there. We’ve been in this game before and it’s something good going on here for SLAM in our third year. Now we’re just one win away.”

SLAM (20-8) hosts Calvary Christian in a regional championship next Tuesday, also at Gibson Park. The sequence of events that made that possible add a new chapter to SLAM’s short history book. Making it that more rewarding is the fundamental style of baseball that led to the outcome.

SLAM catcher Jose Garcia got the rally going to lead off the seventh. To that point the Titans were being no-hit by Warriors ace Jakob Zarello, but Garcia slapped a 1-1 offering into shallow right field to end the no-hit bid. Santana came up next ready to bunt on the second pitch if necessary, then instead connected for his game-changing double.

“I was confident in myself that I would get the job done, but on that first one I was just looking for a pitch to hit,” Santana said. “If not, then I was ready to bunt for the team. Thank God he gave me a pretty good pitch to hit and I drove it well and it all worked out.”

Nunez laid down a bunt that died on the infield grass to leave only one play on the ball, which moved Santana just ninety feet from the plate. Now Santana was left to watch the ball and stay alert to go if possible.

“When I was at third Coach Lopez was telling me to watch the dirt ball, and I was ready for any wild pitch or ball that bounced at an angle and I was going,” Santana recalled. “It just came out perfect. I got there fast and it all happened so fast. It was the best feeling ever.”

Across the field Westminster Christian was forced to watch the ride come to an end. The Warriors were playing in defense of a state-record eleventh championship last season, and the guys played with valor to give themselves every opportunity to win and survive.

“It’s never easy to take a loss,” Westminster Christian manager Emil Castellanos said. “You have to tip your hat to them; they got the big hits when they needed them in the end. It’s just tough. It’s a tough way to end the season knowing that we had our captain and senior on the mound throwing the game of his life, with a no-hitter until the end. To lose that one, that one hurts. He gave his life out there and we should have had his back.” 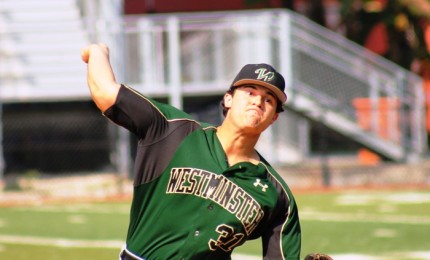 Jakob Zarello struck out seven and allowed one earned run in six innings.

Zarello was dominant to shut down the Titans’ vaunted offense for six full innings. SLAM had 262 hits on the season coming into the contest, but over its first 18 outs Thursday the batters had only mustered four walks. Of those baserunners, two came in the first inning and both were subsequently erased on nice pickoff moves from Zarello. The right-hander struck out seven and was only two hitters over the minimum entering the seventh.

Typical of all no-hit bids, the Westminster Christian defense had made a few great plays to rob the Titans of hits. Both those instances came to Santana, who connected for the three hardest hits of the day. In the second, Santana lined a shot up the middle that Warriors second baseman Tyler Paige snared with a leaping catch. Two innings later left fielder Clinton Gulley made a sliding grab on a deep shot to left from Santana.

Westminster Christian (21-8-1) broke the scoreless tie in the top of the fifth. Pinch-hitter Nicky Perez singled through the left side and was replaced by Mike Acosta, who re-entered the game. Gulley and catcher Luis Aviles walked to load the bases, and Zarello reached on an error that allowed Acosta to score.

That slim margin nearly held up. In defeat the Warriors saluted SLAM on their title quest, as a program that knows what that feels like as well as any. Now Westminster Christian looks ahead to developing the guys for next season and beyond.

“We put them in these situations so that they can become the guys they are,” Castellanos said. “They fight to the end and we’ve just got to get better and keep working hard. We will train, train, train and get ready for next year. We’ll be back.”