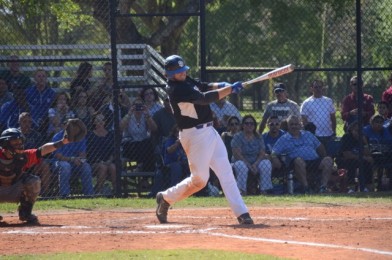 Alek Manoah drives a ball deep for an RBI double.

The South Dade Buccaneers hosted the Southridge Spartans at Coral Reef park on Monday afternoon. The energy of both teams was felt from warmups, and Buccaneer’s manager Fred Burnside said that he felt it very much from his team.

That mojo carried onto the field for South Dade, as the Bucs blanked Southridge 3-0 to advance to the district championship.

“We had a lot of energy, which I think is a big thing at this point of the year,” Burnside said. “What we did in the regular season is meaningless, so we came with a lot of energy and beat a good Southridge team.”

The first three innings were all pitching and defense, with strong performances from both teams. There were only two hits and six strikeouts throughout that time frame. Those hits came off the bats of Southridge’s Alex Vazquez in the second and South Dade’s Alek Manoah in the third, but strong pitching kept any damage from being done.

The Buccaneers (21-3) got on the scoreboard in the bottom half of the fourth. Alek Manoah started the inning with a double into left field. Chris Allende then drove one deep to left for a triple, scoring Nico Gonzalez, who was pinch-running for Manoah.

“I just stayed calm through the whole at bat,” Allende said. “I had a 2-0 count so I knew I was going to get a good pitch to hit. I was just ready to swing.” 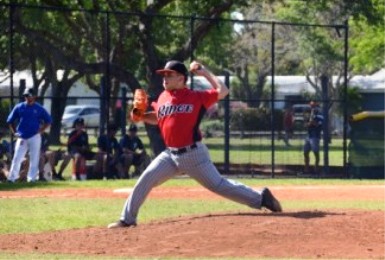 Southridge’s Ralph Fernandez was strong in his outing, but was unable to secure the win

The second run of the inning came off the bat of Joel Rivero, who collected an RBI double, scoring Allende.

South Dade scored their third and final run in the bottom of the sixth when Richie Sobalvarro scored with another RBI double off the bat of Rivero. Sobalvarro got on with a base hit to start off the inning.

The Spartans showed some life in some innings, but the Buccaneers pitching and defense was able to hold them off. They looked like they had something going in the fifth inning when Austin Taylor began the inning with a hit that then led Nick Deegan to bunt him over to scoring position. The Buccaneers, however, kept their composure and forced two more outs.

“After our disappointing season last year when, in first time in school history, we did not even make the playoffs, our goal this year was to get into the playoffs,” said Spartans manager Ed Doskow. “To be able to play in this game and compete against South Dade with only two seniors on the field, I told the young guys that we have a bright future ahead of us for next season.”