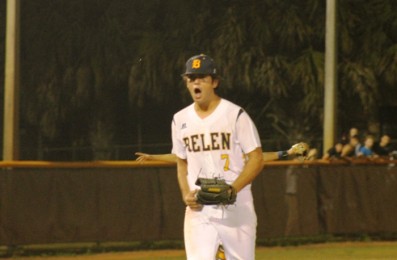 Albert Maury celebrates after recording the final out for Belen Jesuit.

Heading to the plate for the most important at bat of his season, Eric Wilson was motioned over to chat quickly with Belen Jesuit manager Jerry Albert. Trailing by a run and down to its final out, the team was counting on Wilson to deliver with a pair of runners on in the top of the seventh. Wilson did exactly that, sending a soft liner into shallow left-center field to plate the tying run and shift all the momentum to the Wolverines’ dugout.

Two innings later they capitalized on some defensive miscues to tally the deciding runs and claim a 3-1 victory over Pembroke Pines Charter in a 7A regional semifinal at Flamingo Park in Pembroke Pines.

“Eric Wilson is something else,” Albert said. “He’s been doing that for us all year. We call him ‘Wee Willie Wilson’ and he hits them where they ain’t. So I called him over and said, ‘Why don’t you hit it where they ain’t?’ and he just started laughing.”

Pinch-hitter Humberto Torres and Jonathan Barditch both walked against Jaguars ace Daniel Rivero in the seventh. Rivero struck out a pair and was one batter away from the complete-game victory when Wilson struck. The tight battle that began with five scoreless innings in a great pitcher’s duel then needed two more frames to declare a victor. Barditch walked and scored on an error and CJ Vazquez reached on an error and came in on a sac-fly RBI from Andrew Hernandez.

Reliever Albert Maury finished things off with the final three of the ten outs his team asked of him. After surrendering a lead-off single to Julian Barcelo, Maury got the next three hitters to strike out swinging to end the contest.

“This was a tough game; just unbelievable,” Albert said. “This is great for the kids and we have had such a fantastic year with them. They’ve been doing things just like we want them to and this is an absolutely terrific group. We felt so good about them, so it’s really great for them that they were able to come back and get the win.”

Belen Jesuit (18-11) advances to a road meeting against either Dwyer or Martin County in next week’s regional championship.

Rivero and Belen starter Pablo Arevalo both delivered quality starts and allowed just one earned run, although neither factored in to the decision. Rivero went seven innings and struck out nine, working out of trouble despite allowing three hits and six walks. Arevalo gave way to Maury with two outs in the sixth, after surrendering four hits and striking out six.

Pitching depth has been a strength for the Wolverines all season, and they turned to a guy in Maury who is equally dominant. The senior proved up to the task by striking out five and allowing only one hit. 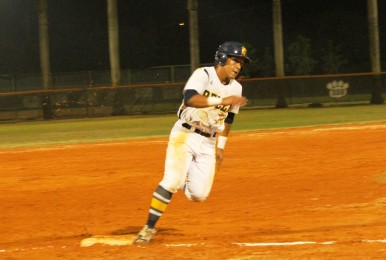 Humberto Torres rounds third to score the tying run in the seventh.

“Before the game we were saying that we have great depth for this one-game-a-week scenario,” Albert said. “We knew that in these types of situations we’ve got the guns coming right at you and we’ve got another one right behind him.”

Maury entered in a tough situation, after the Jaguars (16-10) struck in the sixth inning for the first run of the night. Jorge Herrera singled through the left side and advanced to second on a throwing error. Mason Feldman made a nice adjustment with two strikes, fouling several pitches off before getting a grounder to the right side that moved Herrera to third base. Barcelo also delivered with two strikes, jumping on a hanging breaking pitch for an RBI single and a 1-0 lead.

When pinch-hitter Chad Shim was hit by a pitch to follow, Belen went to the bullpen for another ace.

“It’s probably one of the hardest situations I’ve ever been in, knowing that our season could literally end with one mistake right there,” Maury admitted. “This is a great hitting team and with one mistake they can make something happen. Me and my catcher just worked together to keep the ball down and it happened.”

When his guys rallied for the lead in the ninth, Maury was ready to go back on the hill and end it.

“When we went up one I knew I was going to end it,” Maury said. “Then we got another one. This order is ridiculous, from one to nine. They just make everything happen, whatever the situation is, and they feel no pressure. They put the ball in play and they are aggressive. You put up runs late in the game and good things are going to happen.”

Both sides had five hits and two errors, a clear depiction of how equally-played and competitive the game was.

“Carlos Iglesias and his staff do such a terrific job with the kids over there,” Albert said. “They don’t get anywhere near the credit that they should, because they do a fantastic job with the teams they have. They really played a heck of a game and the kid pitched phenomenal for them. Rivero was dominant tonight and he is a terrific competitor who really battled. It took everything we had to get it, and it’s hard to have it feel much better than this. What a great feeling.”

Today's Games
Latest Scores
Scores last updated at 7:52 am
No Scores Yet!