Belen Jesuit Squeezes Out A Win Against Dwyer 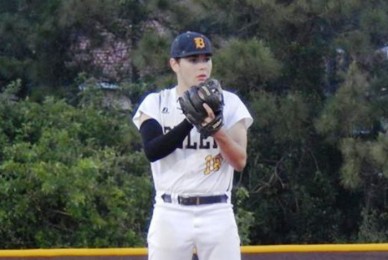 The 7A regional championship between the Belen Jesuit Wolverines and the Dwyer Panthers came down to some small-ball and great execution by the visiting Wolverines.

With Shane Roberts on the mound for the Panthers in the top of the eighth inning, the Wolverines would put CJ Vazquez on via an infield error and eventually moved him around to third after Christian Del Castillo doubled to left center field. A ground out produced the first out of the inning, but Andrew Hernandez put down a perfectly-executed squeeze-bunt to plate the go-ahead run for the Wolverines.

The Panthers came to the plate for the bottom of the eighth knowing the game, and their season was on the line. Charlie VonWerner led off with a single to right and a sacrifice bunt pushed the potential tying run to second base. But the game closed with a strikeout and a ground out that preserved the win for the visiting Wolverines.

“I love being in these situations, as my teammates gave everything they had in such a close and tight game,” Belen Jesuit’s Christian Del Castillio said. “These are the type of games that bring out your best and it did for us tonight.”

The Wolverines first two outs were recorded by strikeout by Dwyer starting pitcher Colton Rendon. A triple by Christian Del Castillo and an RBI double by Alex Falla with two out put the pressure on quickly. An infield error pushed across the second run of the inning, and it looked like the visiting Wolverines were off and running.

But Rendon and the Panthers settled down and proceeded to keep the Wolverines offense at bay with minimal damage for the next three innings. That provided enough time for the Panthers’ offense to put together some run support of its own for Rendon.

In the third inning, Myles Colangelo and Danny Lynch supplied singles after two outs. Kyle Khachadourian then laced a solid single to plate the Panthers’ first run of the game. An infield error allowed the Panthers’ second run to score to tie the game at 2-2.

Wolverines starting pitcher Pablo Arevalo was able to make it through four strong innings, only allowing the two runs in the third inning. Albert Maury relieved Arevalo to begin the fifth inning and did as masterful a job for the remainder of the game to earn the victory. 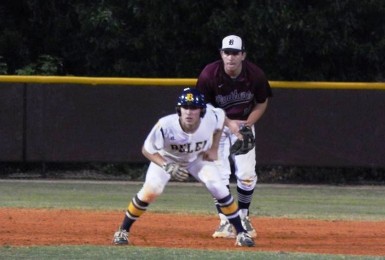 “We really didn’t know anything about Dwyer coming into tonight’s game. We came out to play and were able to get two runs early and put some pressure on them,” Albert Maury said. “But they fought hard and came back with runs of their own. I just said to myself that I couldn’t let my team down after all the hard work this season. Luckily, we were able to get the final run and come out with the win tonight.”

The fifth inning saw the Wolverines add to their two-run lead. The inning began with walks to Jonathan Barditch and Eric Wilson. The Wolverines pushed across two more runs with smart, fundamentally sound baseball. A sacrifice fly by CJ Vazquez resulted in one run, another walk followed by another sacrifice fly by Alex Falla and the Wolverines had upped their lead to the score of 4-2 through five innings of play.

It looked like the home Panthers might be finished, but they proceeded to push two runs across in the seventh inning to tie the score. Dylan Jones and Michael Siriani each singled to start the inning. A perfectly-executed sacrifice bunt by Myles Colangelo advanced the runners into scoring position.

Danny Lynch followed with a solid single to right-center to plate both runs for the Panthers and tie the score once again at 4-4. If not for a beautiful and perfect throw to cut down the potential winning run at the plate by Wolverines right fielder, Alex Falla, the Panthers might have left the night on the winning side. Tyler Ahearn pitched the bottom of the seventh and held the Wolverines to no runs for the inning.

“Man, that was as tough as it gets,” Belen Jesuit manager Jerry Albert said. “Every time we scored, Dwyer fought back. We haven’t given up four runs in a while because of our pitching, but they sure made it difficult on us tonight. Dwyer was tenacious tonight, with great approaches at the plate and really made us work hard. We played a little small ball and it worked for us tonight to help get an extremely hard-fought win.”