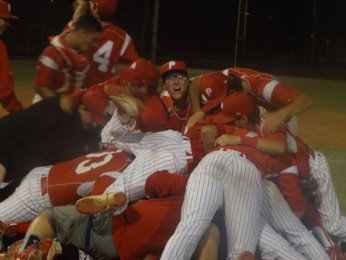 With a 9-3 win on Tuesday night, the Spartans will be advancing to the state semifinals against Bishop Moore.

Soaked in sweat, Monsignor Pace Spartans manager Tom Duffin looked around Pompano Beach’s baseball field and let out a sigh. Thankfully for the veteran coach, the sigh was one of joy and relief as the Spartans took advantage of numerous opportunities on offense and a fantastic pitching performance from senior Chris Rodriguez to advance to the state tournament with a 9-3 victory over the Pompano Beach Tornadoes.

“This was everything a regional final is going to be,” Duffin said. “We faced a Pompano Beach team that wasn’t going to give up and Chris, who has been our workhorse all year, he kept battling with twelve strikeouts and we made plays behind him. We had some big innings where we put the ball in play when we had to and we were able to give our guy some much-needed support. I told our guys coming in that you need to think of this game as 0-0 in every inning, whether you’re up ten or down ten. People understand that with regional finals, you lose and you go home, so you need to fight and we got ourselves focused.”

Rodriguez was 7-2 in the regular season with a sparkling 0.40 ERA, and he was just as ecstatic as his coach after a game in which he struck out twelve and pitched into the seventh inning.

“We have to stay hungry,” Rodriguez said. “We need to go out there and play our game. Chemistry is everything and it gives us so much confidence that we all have each other’s backs. We have to give Pompano all the respect because it’s so hard to get here, but we were the better team tonight. We still need to work on the little things, but we can’t let this get to our heads. If we want to keep winning, we need to stay hungry.”

The Spartans will face Bishop Moore in the state semifinal at jetBlue Park in Fort Myers next Wednesday night. 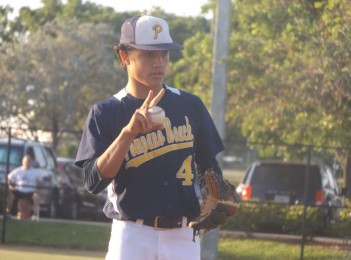 Sophomore Trevor Kniskern got the start for the Golden Tornadoes on Tuesday night.

“We’ve been working for this for the past three years — you have to remember that in 2014, we were starting six freshman and we took it on the chin,” Duffin explained. “We were in a lot of tight ballgames but we knew that it had to be a process, and last year we were 16-9 but we weren’t mature enough to win in the playoffs. Since then, we’ve been working in the summers, working in practice, working so that this year, you get to see a team that has been put together and works as one unit. We’re not going to pound out a million hits, but we’re going to find ways to put the ball in play and score runs.”

The Spartans started off the scoring early as right fielder Bryan Diaz hit a ball out of the park with one out in the top of the first inning for his first homer of the season. Teammate Justin Ledesma drove in the second run with a two-out RBI double to score shortstop Jorge Arenas, who had walked and stolen second earlier in the frame.

Working with a lead as soon as he took the mound, Rodriguez worked out of trouble in the first and recorded six of his first seven outs by way of strikeout.

Pace shined on offense in the fourth inning, as the team scored five runs with two outs to blow the game open after Tornadoes pitcher Trevor Kniskern singled in two runs to help his own cause and lower the deficit to 3-2. The most memorable of those five runs was Jonathan Reyes-Diaz escaping a rundown between third base and home plate after noticing that home was unsupervised following an error. 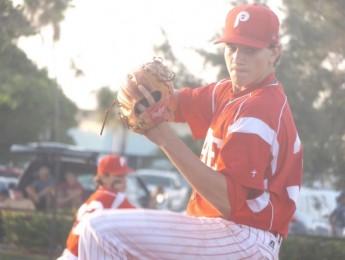 Chris Rodriguez pitched into the seventh inning for the Spartans.

Diaz wasn’t the only Spartan to hit a home run on Tuesday night, as second baseman Anthony Sanabria added a long ball to start off the fifth inning. Pompano Beach’s Vinnie Costello hit a home run of his own in the bottom of the fifth that made the score 9-3 to close out the scoring.

“I told our guys that I’m proud of them. Nobody expected us to be here and we play in the toughest region in the state. We ran into a team that is extremely hot, and there were 30 pro scouts here tonight for a reason,” Golden Tornadoes manager Joe Giummule said. “We’ve seen Trevor pitch a lot better, but it’s also a lot to ask for a sophomore to pitch in a game like this. He’s done it all year and that’s why we gave him the ball. Whether it wasn’t executing a pitch here or there, or a play, it just didn’t go well tonight. We talk a lot about the little things and we gave up a lot of base hits tonight on 0-2 counts, which isn’t a recipe for success. Trevor threw well enough to keep us in the ball game and at the end of the day, this season was amazing.”

The final word goes to Duffin, who took a break from getting sprayed with water by his players to laugh and wipe a tear away.

“We gave our guys confidence and it’s absolutely amazing what we’ve accomplished so far,” Duffin said.