SLAM Falls 6-5 To Calvary Christian In 4A Regional Final 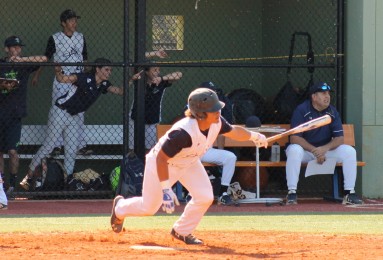 Jose Garcia connects for an RBI single as part of a 3-for-4 day that included a double and a two-run home run.

A pair of home runs in the top of the fifth lifted Calvary Christian past SLAM Academy 6-5 in a 4A regional championship at Gibson Park in Miami on Thursday afternoon. Max Guzman hit a three-run home run and Victor Pimental followed that with the deciding run on a solo shot to left field that put the Eagles up by three runs.

Calvary won the region and earned a berth in the state Final Four next week, while the Titans (20-9) see another record-setting season come to an unfortunate end. SLAM won its second straight district title this year and also earned its first regional playoff win last week against Westminster Christian.

“In just our second year of eligibility we made strides in the playoffs,” SLAM manager Alfonso Otero said. “Last year we got eliminated in the regional quarterfinal and this year we won the semifinal and made it to the regional final. It’s still a young team and 60% of my team are still underclassmen. We are still learning how to get to those big games and win it, but I am proud of every one of these guys. They worked hard all year and they made a lot of progression from last year. I think the program, from the coaching staff, player-wise and the administration, is heading in the right direction for the future.”

Despite falling behind by three runs early on, the Eagles battled back to stay in the fight before a big fifth inning propelled them in front. Calvary (19-9) got on the scoreboard in the fourth when Guzman walked and gave way to courtesy-runner Peter Carciopollo, who scored thanks to an RBI double from Tommy Orr. Pimental was hit by a pitch and scored off a sac-fly RBI from Luis Ezra to pull the Eagles within 3-2.

An inning later the two longballs put the club in front, but SLAM did not go away quietly. Brian Frias was hit by a pitch and Jose Garcia worked the count full and then connected for a two-run home run deep down the left field line. 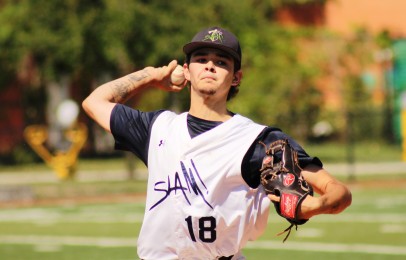 Blake Brattain got the start and went the first three innings for SLAM.

After chasing sophomore starter Christian Scott in the bottom of the fifth, SLAM found less success against left-handed reliever Noah Yager. The senior southpaw recorded the final eight outs to earn the save and preserve the victory for Scott. After allowing a single up the middle to Yoel Quintana, Yager allowed just one more base runner the rest of the way, while striking out three.

“I give those guys credit,” Otero said. “We were undefeated at home and we beat them a few weeks ago in the district title game. They threw their best guy at us and we hit him pretty hard. The lefty held us down there, and just credit to Alan Kunkel and his guy. They were one swing better offensively, one pitch play better than us and one defensive play better than us. That’s just the way the ball rolls and we wish them the best luck at states.”

The Titans had nine hits and several big innings in an offensive battle. They had not lost at home all season long with a perfect 14-0 record at Gibson Park heading into Thursday’s game.

The top of the order continued to wreck havoc just as it had all season long. Shortstop Jeter Downs singled to left field to start off, and then reached third thanks to a stand-up double from Garcia. Andres Santana lined an RBI single past second and Chauncey Nunez plated another with a 5-3 RBI on a slow roller to third base. In the third Downs singled again, stole second, advanced to third on a throwing error and scored thanks to an RBI single from Garcia.

Garcia was 3-for-4 and fell a triple short of hitting for the cycle, earning seven total bases and three RBIs.