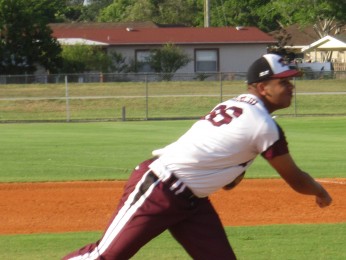 Warriors’ starter, Angel Tiburcio pitched six innings carrying a no-hitter through five, striking out the side, in order, in the third.

The Warriors’ led off their final rally with Jersely Cicilia’s single to left to start the seventh. The Victors brought in their reliever, ending the night for starter Chris Otero, who scattered five hits while striking out five. Cicilia stole second and took third on a throwing error. With the winning run on third and nobody out, Jowenrick Daantji walked. Sitting on a first-pitch fastball, Xavier Edwards singled sharply over the drawn-in infield to score Cicilia and extend the Warriors’ winning streak to twelve games.

“Hats off to their pitcher, Otero. He had us off balance. Inside, outside; he was in the zone,” noted Cuello. “Angel gave us everything he had today, six innings of one-run ball. We had De Jongh ready if things got slippery at the end.”

A scoreless game through five innings, the Victors broke up Tiburcio’s bid for a no-hitter in the sixth. Nelson Porras singled to left. Sebi Dayoub moved the runner with a 1-3 fielder’s choice. A fly ball by Aldo Ripley allowed Porras to tag up and advance to third. Orlando Ribalta singled up the middle to drive in Porras and give the Victors a 1-0 lead.

With one out in the bottom of the sixth, Edmond Americaan was hit by a pitch. Tiburcio singled, sending Americaan to third. With Bertram Murray at the plate, Americaan scored the tying run on a wild pitch. Pitching masterfully in traffic, Otero would load the bases but retired two batters on fly balls to contain further scoring. Americaan exuded confidence after the game.

“We work hard every year for this moment, to go to states. This team is a good team because we come close together like a family to win ball games,” said Americaan. “We’ve got two more games to go and I know we’re going to get them.” 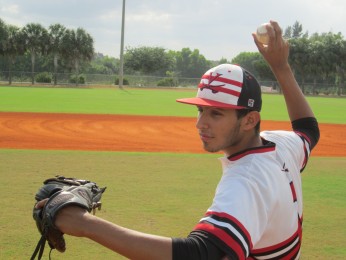 The Warriors were extremely strong up the middle. Second baseman Michael Geragi charged a ground ball on the first play of the game to beat the Victors’ leadoff batter by a step. He also elevated to snag a line drive ticketed for right field for the first out of the seventh inning, most likely saving a run. Two batters later, Joel Rojas doubled all the way to the right field fence, which would have given the Victors a much-needed second run had that runner been on base.

The defensive play of the game came in the top of the fifth. An infield error and a walk put Luis Rodriguez and Jordan Gonzalez on base for the Victors. After a 4-6 fielder’s choice, the runners were at the corners with one out. Bryan Lopez hit a chopper to Warriors’ first baseman Lernix Williams, whose throw to second sailed high. Shortstop Xavier Edwards leapt into the air to catch it and unleashed a sidearm return throw on his way back down in time for the inning-ending double play.

With two innings to play, Warriors’ manager, Miguel Cuello saw that play as an omen.

“We practice, we preach the tough double play. When he landed, the ball was already at first base,” said Cuello. “When I saw that, I knew this was our game, because if they don’t score there with runners on first and third, things are looking good.”

“We played extremely well. I’m extremely proud of my guys. We had a good season. We battled to the end,” Cuadra said. “It just came down to one more play. We’re going to get ready to get back here again.”

This was not unfamiliar territory for Cuadra. Thirteen years ago as a junior shortstop and pitcher for Miami Christian, he was on the same field playing the same team for that year’s regional championship when Trinity Christian scored the winning run in the bottom of the seventh as well.

“When I was a player and now as a coach, the same result,” pondered Cuadra. “Hopefully, the third time around, we’ll find a way to get over the hump.”