Westland Hialeah Advances To 8A Regional Final With 5-2 Win

Written by Anthony Uttariello on May 6th, 2016 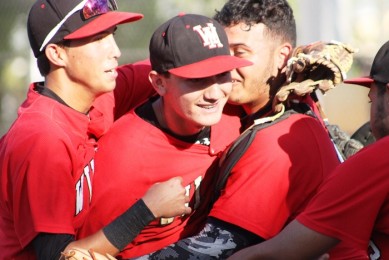 It has been a season of firsts for the Westland Hialeah Wildcats. The team won its first-ever district title a couple of weeks ago, and on Thursday afternoon the Wildcats punched their ticket to an 8A Region 4 title game with a 5-2 win over Mater Academy.

“These guys have been playing like this all season,” said Westland manager Jose Alvarez. “It’s been a long process from when we started seven years ago, and all of the hard work is starting to pay off this season.”

The heavy lifting on the mound this season has been done by Giovanni Arriera, and the team went to their ace again Tuesday. Arriera came into the game with an ERA under one, and nearly 100 strikeouts in less than 60 innings.

The Lions, however, are two-time defending region champions, and although they are young, the team has matured through the course of the 2016 season. In the first inning, the Lions showed they were in a mood to make it three straight regional titles.

Alex Rodriguez hit a two-out single, and then scored when clean-up hitter Brandon Dudley hit a double to deep left.

Westland answered back immediately in their half of the first off Mater starter Joe Soto. Brian Lavastida, who was at the center of the offensive action all afternoon, hit a one-out single. Junior David Vazquez then drilled a double to deep left, followed by an opposite-field triple by Jorge Diaz, and suddenly the Wildcats held a 2-1 lead.

From there, both pitchers settled in. Mater scratched across the tying run in the third when Lewis Menendez doubled to right, was moved to third on a Tyler Perez sacrifice bunt and scored on a Rodriguez single. 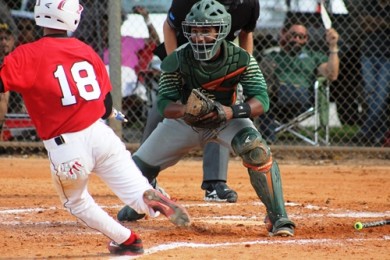 As the game moved into the later innings, the defending champions appeared to have weathered the storm of losing to Westland three times during the season, and had hopes of redemption.

The Wildcats showed there was a new sheriff in town in the fifth, when their offense exploded for three runs on five hits. Diaz provided the big blow, a towering home run to left field that sent the Wildcats faithful in attendance into a frenzy.

“I was just looking to make good contact,” said Diaz. “My teammates had already picked me up with two runs in the inning, so that was just kind of the last shot.”

From there, Arriera took the mound to close it out. But when he ran into a jam in the sixth, Vazquez was summoned to put out the fire. The junior got the final out in the sixth and then closed the game out in the seventh with the help of a dazzling, diving catch by left fielder Michael Uz to lead off the inning. The defensive gem was one of several on the day for Westland.

“Our defense played great behind us today,” said Arriera. “It is our job as pitchers to throw strikes and trust our defense. Today, I didn’t have my best stuff, but I knew my defense would pick me up, and they did. That is how we play, everyone plays for each other.”

All that is standing in the way between the Wildcats and an appearance in Fort Myers for the state championships is a date with 8A-13 champion Atlantic. The Eagles are no stranger to playoff baseball, as they advanced to the state tournament as recently as 2012. The game will be played Tuesday at 7:00 PM at Little Fenway Park in Delray Beach. 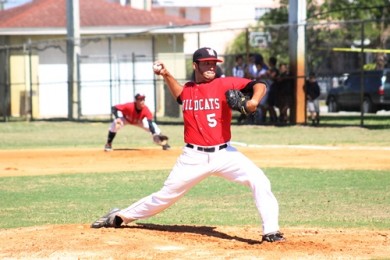 Due to the weather pushing back the regional semifinals to Thursday, there is now a chance that Arriera will not be able to go on Tuesday. That does not concern the Wildcats’ ace.

“We have guys on this team that have been getting the job done all year,” said Arriera. “So whether it’s me, or any of our other pitchers, I have confidence we will get the job done.”

As for Mater, their rebuilding season ended shorter than they had planned, but the season was not a failure in the eyes of Manager Mike DiRosa.

“I think these guys came in just expecting to go to states because that is what the past few teams have done,” said DiRosa. “But they learned early on that just showing up wasn’t going to be enough. After we started slow, and the kids started to see what it takes, we played better. Even our games with these guys, we got better and better all season. The last two games with them were a play here, a play there, and it could have been a different outcome.”