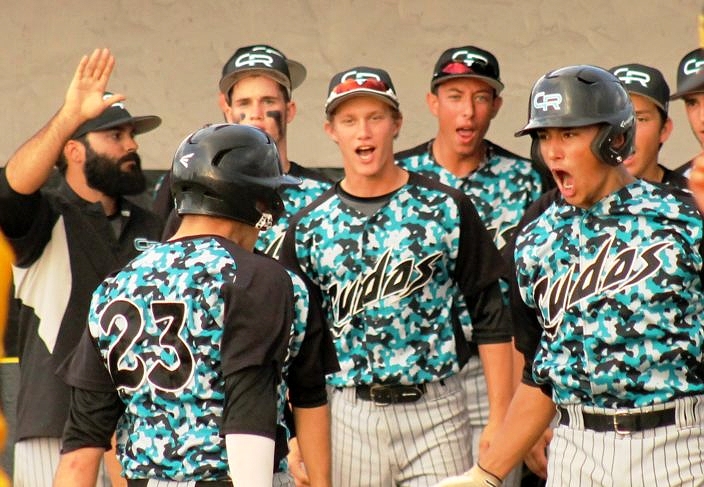 Victor Mederos is cheered by his Coral Reef teammates after scoring the winning run in the seventh.

Michael Paez was part of a historic group that captured Miami Sunset’s only district title in 2013, and on Monday afternoon the celebrated alum was honored at Raul Ibanez Field at Miami Sunset by having his high school jersey retired in a pregame ceremony. In an ironical twist, it was visiting Coral Reef that left the field victorious through a concerted team effort reminiscent to Paez’s district-championship club. The Barracudas came back late and tallied the winning runs in the top of the seventh to claim the 6-4 victory.

Mike Ryan’s RBI single in the seventh accounted for the deciding run and Nick Kosavich closed out the game with a pair of strikeouts as Coral Reef improved to 4-0 on the young season.

“I’m proud of the guys and it is a tribute to our coaching and the attitudes these players have taken,” said Barracudas first-year manager Chris Leon. “These guys stay in every moment, they understand that it is all about the “W’s” and they know the game is not over in the middle of the fourth. It ends in the seventh inning; so that is what we plan on doing is playing through the seventh.”

In the seventh Michael Ogden and Victor Mederos had consecutive singles, before Odgen was erased on a fielder’s choice that put Sebastian Jimenez at first. Mike Ryan singled through the left side and Mederos came in for the winning run, and courtesy-runner Vinny Becking also scored on a passed ball.

Coral Reef trailed most of the way, as the pregame energy for Paez seemed to carry onto the field and helped the Knights get off to a hot start. The honor of having his number 8 jersey retired and presented to him comes on the heels of a huge year for Paez, who is a member of the Coastal Carolina College World Series National Champions this year, who was drafted in the fourth round by the New York Mets and whom also recently married his sweetheart. 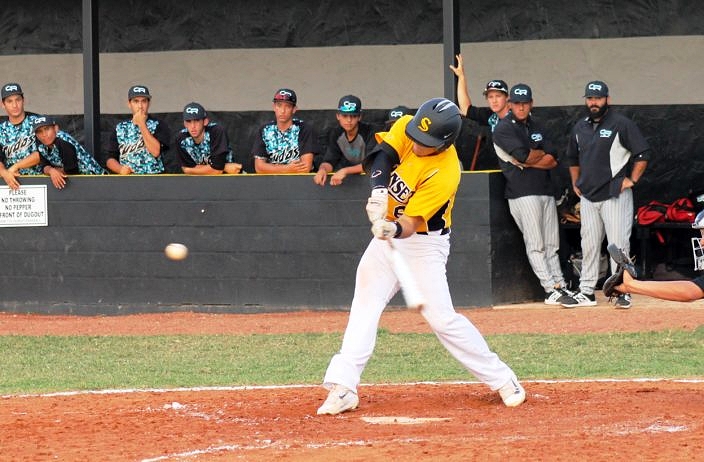 Sunset designated hitter Marc Romero had an RBI double in the bottom of the first.

“It’s a big deal, knowing my success is being acknowledged,” Paez said. “The current coaches were not here was I was playing here, but I have known the coaching staff since I was six years old. The fact that they recognized me was pretty awesome.”

Sunset burst out with the lead in the first. Mike Suarez doubled to left field and then came in thanks to an RBI double to right field from Marc Romero.

The Barracudas were stymied by Knights starter Marcos Villaz the first time through the order, but found some success the second time around. Brent Cosculluela had an infield single and Ogden walked, setting the stage for an RBI double from Mederos. Jimenez followed with an RBI single and Joshua Aburto added a sac-fly RBI.

Villaz went five full innings, allowing three earned runs on three hits and two walks. He struck out six on 67 total pitches. Coral Reef tied things up in the sixth when Mike Ryan scored on an error, as some late miscues cost the host Knights. 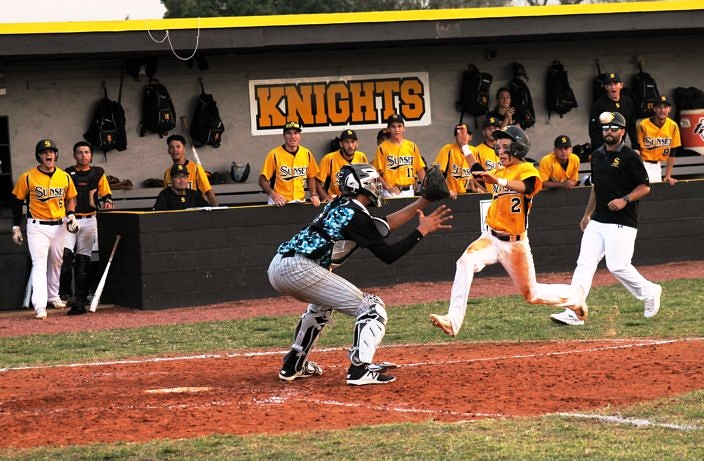 Coral Reef catcher Sebastian Mederos makes a play at the plate to prevent a run from scoring.

“We’re preaching fundamental baseball and they are not doing anything fundamentally correct right now,” first-year Knights manager Joseph Marcos said. “It’s our job as coaches to continue working hard and teaching them the game. Michael Paez was the highlight of our day. He was a Little Leaguer of mine and I coached him a lot of his youth baseball, so I was so proud to have him come back to Sunset and we were able to award him his actual jersey on a frame.”

Paez has not forgotten what is was like for him and his buddies to dogpile and celebrate after winning the district title. Some of those friends were in attendance to enjoy Monday’s ceremony together. They remember what it was like and only wish the same success for the current guys now wearing those same uniforms.

“It was a long journey and it didn’t just happen overnight,” Paez recalled. “That group of guys, we knew each other from when we were little. The fact that we stuck together and are still friends to this day is amazing, and these guys need to know that these are lifetime friends. That is what makes it so much better.”