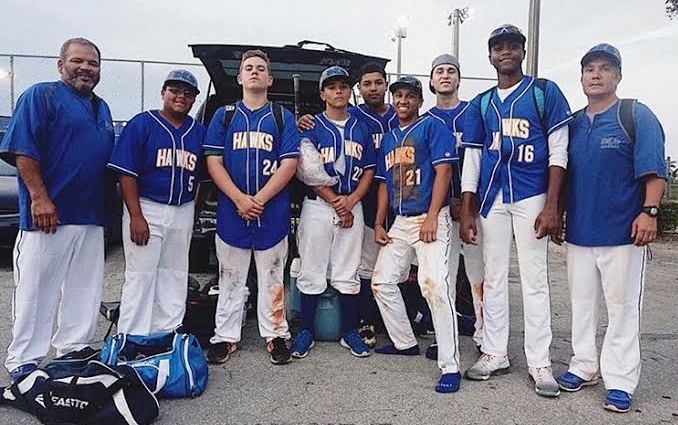 Members of the Doctor’s Charter team celebrate after earning their first win in program history on Monday.

Two new baseball programs popped onto the Miami-Dade radar this season, and on Monday afternoon those two clubs met up for the first time ever. Following a monster fourth inning, Doctors Charter earned a 20-5 victory over Palm Glades for the first win for either program.

The Eagles scored three runs in the top of the fourth inning, but the Hawks (1-4) answered back with a massive, 10-run fourth inning to close out the victory. The Hawks have now scored 29 runs in two games after dropping a tough loss to Sheridan Hills last week.

Doctors Charter is classified as an independent this year, but is slated for 3A-8 in 2018, where it will replace Archbishop Curley in the district. Every step sets a program first, as was the case Monday in adding the first notch in the program’s win column.

“It wasn’t pretty, but we needed it,” Doctors Charter manager Paul Calli said. “We started four eighth graders, but the bats are waking up and the defense is playing solid ball.”

Everybody had a hand in the win. Jackson Carney led the offense in going 3-for-3 with five RBIs and two runs, Alfie Ramirez had a single, an RBI and three runs, and Loren Kretzschmar had an RBI single and scored four runs. David Navarro had a single and scored three times and Cam Thompson reached base twice, scored twice and swiped his eighth bag of the season.

Doctors Charter starter Charlie Calli allowed one earned run in four innings to earn the victory. Calli struck out five to bring his season total to 18, and he also had a single, an RBI and two runs.

The Hawks have a tough week ahead still, facing Dr. Krop Tuesday and Dade Christian on Thursday and Friday. On Friday, Doctors Charter will host Dade Christian at Barry University’s Feinbloom Field.