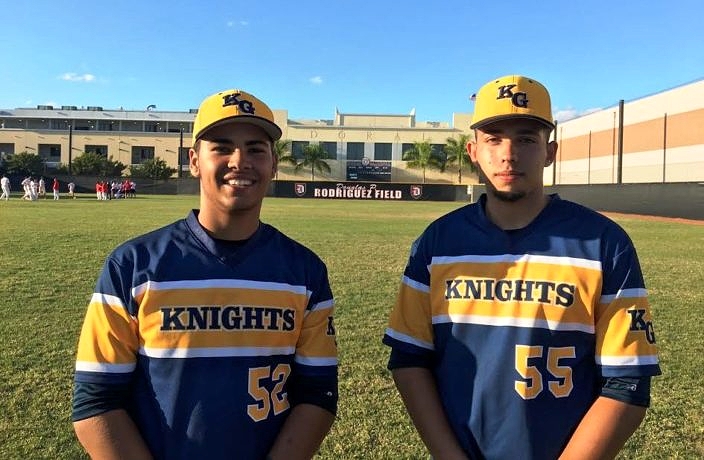 Keys Gate Charter staged a dramatic late comeback to steal a 5-4 win over host Doral Academy on Friday afternoon. The Knights (6-2) broke the tie with the winning run with one out in the seventh, as Anthony Vargas’ infield RBI single drove in Brandon Espinal with the bases loaded. Espinal got it started from the nine hole with a single to left, and Wesley Dacosta and Omar Baldo both walked to bring Vargas up to the plate.

The momentum made a dramatic swing to the visitor’s side in the sixth inning thanks to switch-hitter Rey Hernandez. After a Vargas walk and a single by Enzo Evangelista, the Firebirds (7-3) relieved left-handed starter Jorge Perez and went to the bullpen for a righty. This had Hernandez switch to the left side, and he hit the first pitch he saw down the line for a three-run home run that tied the game.

“Rey’s home run was great to see after striking out twice and committing two errors,” Keys Gate manager Rich Benavides said. “He came up in a big spot, didn’t carry any baggage with him to the dish, listened to his coach and jumped on the first-pitch fastball. He showed a lot of maturity for such a young player.”

Frank Fernandez made the start for the Knights in his first action of the season, and he asked for the ball in the seventh now that his side had the lead. Things nearly backfired as he hit the leadoff batter and the next hitter flied out to center on a shot to the warning track that nearly left the yard for a walk-off home run. Baldo then threw out the courtesy-runner attempting to steal.

Doral still refused to go down quietly. Michael Marin singled to center to keep the Firebirds’ hopes alive. Fernandez then picked up his fourth and final strikeout of the day on the next batter to end the game and earn the victory.

A post shared by Doral Academy Firebirds (@doralfirebirdsbaseball) on Mar 17, 2017 at 5:39pm PDT

“Frankie got the ball tonight in a spot start because we burned two starters against Key West,” Benavides said. “He delivered with a gutsy performance against a great ball club. The entire game he kept asking for his team to get him the lead and he would hold Doral off. He and his catcher, Omar Baldo, did just that.”

Both sides exchanged unearned runs to start the contest. Keys Gate got on the scoreboard in the first when Wesley DaCosta walked, stole second and third base and then came in on a throwing error.

Doral Catcher Jose Garcia evened things up with a single that was followed by an error that allowed a runner to score in the bottom of the first.

Doral moved in front in the third inning on an opposite-field home run from Jose Garcia. The Firebirds added a run in each of the next two innings to build a 4-1 advantage heading into the sixth inning. Robert Leiva had an RBI single and Jonathan Fernandez an RBI double.

Jose Garcia finished 2-for-2 on the day. The home run was his third of the season, which leads the team. It is also the 20th home run of his high school career.