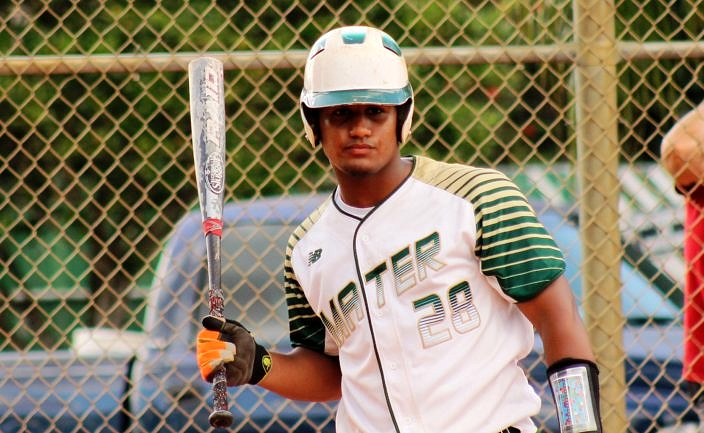 Luis Diaz ignited the Lions with a two-run home run that tied thing sup in the bottom of the second inning.

Even though it was still early in the game, Mater Academy needed a spark. The hosts of Wednesday’s HSBN Miami-Dade Game of the Week against Mater Lakes found themselves down by two runs and had already missed a great scoring opportunity in the first.

In stepped Luis Diaz, and with one swing of the bat he changed the entire momentum in the bottom of the second inning. After Mykanthony Valdez singled ahead of him, Diaz connected for a long drive deep to left field and over the fence at Hialeah’s Walker Park for a tying home run. Mater scored twice more in the inning and went on to earn the 5-2 comeback win over Mater Lakes.

“It was a hitter’s count, so I was looking for something that I could drive and I got the fastball and did what I did,” Diaz said. “There is no better feeling than to bring your team up when they’re down. We started slacking in the beginning, and I know that brought everybody up. It was a Game of the Week and we ended up coming up with the ‘W’. So it feels good.”

Although the teams compete in separate districts, a friendly rivalry exists between them. Wednesday’s game was a chance for a fun and respectful showdown between two local charter schools. The kids grew up together and live in the same areas, which helped make it more exciting for them to play.

“It’s exciting; we’re sister schools and we have great relationships with the coaching staff, the administration and the kids,” Mater Lakes manager Cesar Temes Jr. said. “The kids all know each other. I thought it was a pretty good game. We just seem to have that one bad inning every game. The approach at the plate was maybe trying to pull a little too much, but other than that the approach was pretty good. It was a good game; it was just that one bad inning that they put up four runs and that was it.” 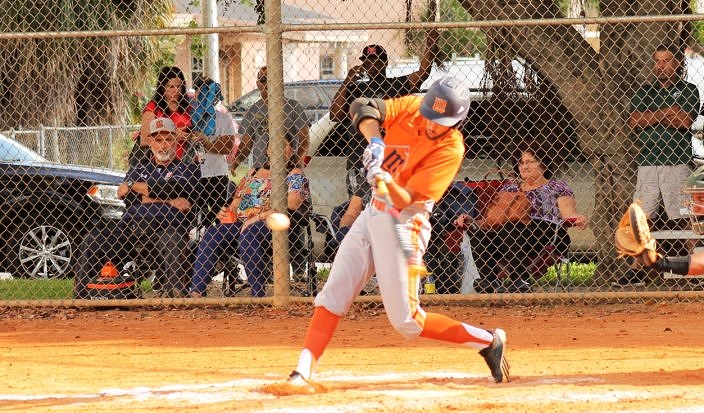 Mater Lakes had a nice day at the plate with six hits, and Cristhian Caro added a sac-fly RBI on this swing.

Alex Aguila helped keep the team charged after Diaz’s homer, which he provided by legging out an infield single. He then stole second base and moved to third when Lewis Menendez lined a single back off the pitcher’s glove to put runners on the corners. The runners were moving as Raynel Delgado rolled a single up the middle to push them both across the plate for the lead.

It was Delgado who came through for the final piece of teamwork that helped add another insurance run for the Lions (2-2). Chris Muniz walked to start the fourth, and Menendez smacked a double past third. Delgado then lifted a shot to left field deep enough for the sac-fly RBI.

“It’s always a good game between us,” Mater manager Mike DiRosa said of the match up. “It is something that we always like to play against each other because the kids all know each other and like each other. The game just started off really flat for us. The home run really sparked us; it got guys into the game and got our team alive. It brought energy into the game where we were really, really flat. So we needed something like that to happen.”

The Bears (2-2) also embodied that excitement for the game, as guys came out swinging hot bats with four hits in the first inning. Daniel Moreno singled to right, Adrian Perez connected for a base knock to center and Rolando Leyva delivered an RBI single that drove in Moreno. Jose Rojas followed with a single that loaded the bases, before Lions starter Luis Gonzalez worked out of the jam with an infield ground out.

An inning later Mater Lakes added on another run. Ysnabi Capote reached on error, Moreno singled to center and Cristhian Caro finished it off with a sac-fly RBI on a drive to center.

Gonzalez settled in after that, allowing only two more base runners before exiting after the fourth. The right-hander scattered six hits and allowed one earned run while striking out five. 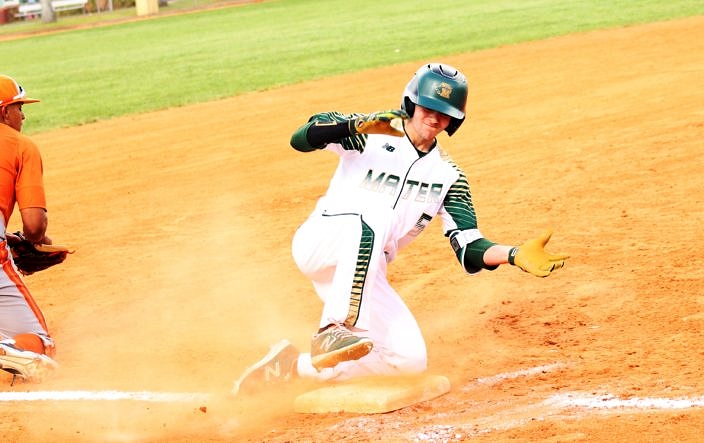 Mater’s Lewis Menendez slides into third base with a triple in the bottom of the first inning.

The Mater bullpen shut things down late to close it out. Darwin Rodas threw two perfect frames and struck out four, and Ramses Hernandez pitched a scoreless seventh inning to preserve the win and earn himself the save.

“Every win is a good win no matter who you are playing,” DiRosa said. “The school is not very far from us, so in terms of a rivalry, it is always a good game. We try to make it happen to bring the charter schools together.”

Mater Academy now holds an 8-2 record in the all-time series.