SLAM Holds Off Hialeah Gardens In Game Of The Week 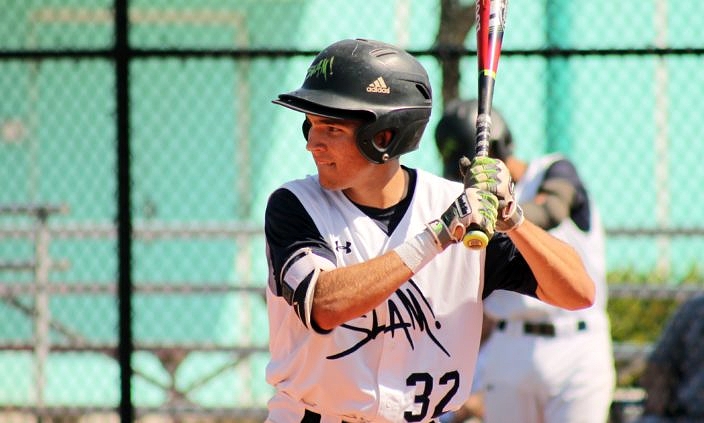 Luis Garcia was 4-for-4 from the leadoff spot to lead the Titans’ offense.

Wednesday afternoon’s HSBN Miami-Dade Game of the Week featured two clubs in the SLAM Academy Titans and the Hialeah Gardens Gladiators with revamped rosters this 2017 season, as a total of seven freshmen were in the starting lineups. Many of those young players proved themselves in big moments of the spotlight game. Behind the strength of a five-run third inning, the host Titans earned a 6-4 victory at Gibson Park in historic downtown Miami.

SLAM batted around the order in the third to erase a 1-0 deficit and secure the decisive runs. The victory ends a five-game skid for the Titans (5-9), while snapping a four-game winning streak for the Gladiators.

The first four batters reached base safely to start the third inning for SLAM. Christian Hermosilla clubbed a double that perfectly split the right-center field gap, Jorge Garcia was hit by a pitch and Ryan Sablon reached safely off on an error on a sacrifice-bunt attempt that loaded the bases. That turned the order over to senior Luis Garcia, who lined an RBI single over the leaping shortstop to put the Titans on the scoreboard.

“Every time I get my chance I just go out there and I play hard,” Luis Garcia said. “I trust my guys that are out there playing defense with me and I just have fun playing baseball with them.”

The hitters went station-to-station to keep the pressure on. Kevin Figueredo supplied an RBI single to center that moved SLAM into the lead, where it remained the rest of the way. Luis Espinal followed with a base hit to left field that drove in another runner, William Santos had an RBI groundout and Jorge Blanco was next with a high, infield chopper that left the defense with no way of stopping Figueredo from also scoring.

Now that the tides had turned, many teams may have packed it in for the day and accepted defeat. But the mark of the Hialeah Gardens program has always been to stay in the fight and battle. Although the rally bid fell a bit short, Gardens manager Carlos Garcia was pleased to see his young group compete like Gladiators.

“One thing that history has always taught us here at Hialeah Gardens is we battle back until the last out, and that’s what we did,” Coach Garcia said. “It was the freshmen who were the ones who came through in the end. They were putting the ball in play and got their lead down to one, and it was a freshman who realized that when you put the ball in play you put the pressure on the defense and things happen. He was able to get himself a base knock and drive in a run.” 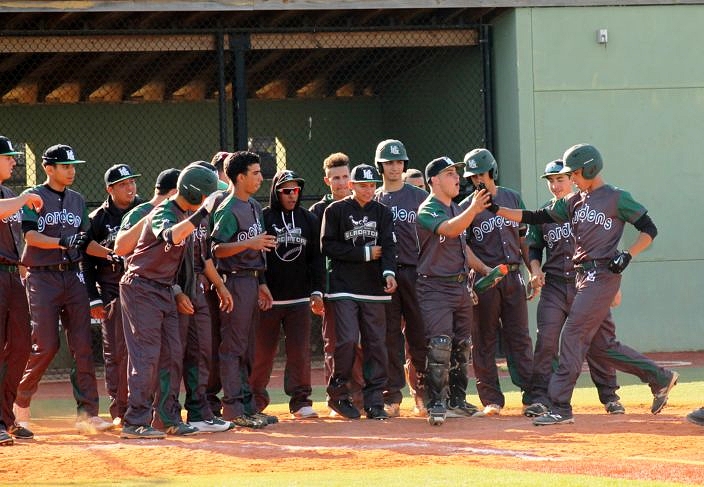 Nathan Llanes is greeted by his Hialeah Gardens teammates after his solo home run in the sixth inning.

That freshman was Gladiators right fielder Ryan Delcorro, who had a nice day at the plate. After singling and then scoring on a wild pitch to give his team the lead in the second inning, Delcorro came up with a key hit that pulled Hialeah Gardens within one run of tying things up in the sixth.

The momentum began to shift back to the visitor’s dugout after senior Nathan Llanes crushed a drive to dead center field and into the bleachers for a solo home run. Junior catcher Levis Aguila kept things going by helping to manufacture another run for Hialeah Gardens (6-6). Aguila followed Llanes’ homer by lining a single to left field, and he advanced to third behind ground outs from Alex Curiel and Emmanuelle Iglesias. Delcorro then had an infield chopper he beat out for a base hit to allow Aguila to score.

Jorge Burgos with a base hit for Hialeah Gardens.

The Gladiators may have evened things up with the next batter, except SLAM second baseman Ryan Sablon made a nice sliding grab and flipped the ball to second base for a crucial putout that ended the inning.

SLAM added a valuable insurance run in the bottom of the sixth inning. Sablon was hit by a pitch, advanced to second on an errant pickoff attempt and then stole third base to get himself in prime scoring position. Luis Garcia came through again by rolling an RBI single through the left side of the defense and just past the sliding shortstop.

“I saw the third baseman playing in, so I saw a hole there and I just tried to put it in play there. I just brought him in, playing for the team,” Luis Garcia said.

The game went to the top of the seventh inning with SLAM now holding a two-run lead but the dangerous Jorge Burgos leading off for Hialeah Gardens. Burgos had almost single-handedly manufactured a run in the fifth that inched Gardens closer in his last trip to the plate, when he singled and stole home after Javier Roman singled but was caught in a rundown on the bases.

The Titans countered by sending freshman Luis Espinal in to close things out. The right-hander carved his way through the order with ferocity, striking out the side to close out the victory and earn himself the first save of his high school career.

“It was a great team win,” Espinal said. “It was a home game, so we had attention on our side. It was a very good team win; we came out playing defense and offense and made our plays, and that was how we got the win.”

While Coach Garcia was pleased that his guys were able to rally back and stay in it right down to the final pitch, he is also looking for the improvement to come earlier in games so that they do not have to fight their way back into it later. In half of the club’s six losses, they have fallen behind in the early innings and never recovered.

“It’s baseball, so the little mistakes here and there early on is where we are at that we have to battle back,” Coach Garcia said. “They played a good game and SLAM held us down defensively on a couple of hard-hit balls where they made very good plays. They are a young team but they are a well-coached team. It ends our streak, but hopefully tomorrow we start another streak. That was something that I was talking about with my boys is that there is always another game, another practice. So let’s get better. Some of the missed opportunities here we analyze today, but when you go to sleep you flush them. Hopefully we get back to our winning ways tomorrow.”

Hialeah Gardens gets back into action with a district game against North Miami on Thursday afternoon. Meanwhile, a big district showdown with Calvary Christian looms on the schedule next week for SLAM.