Belen Jesuit, Doral Academy Tie 1-1 In Game Of The Week 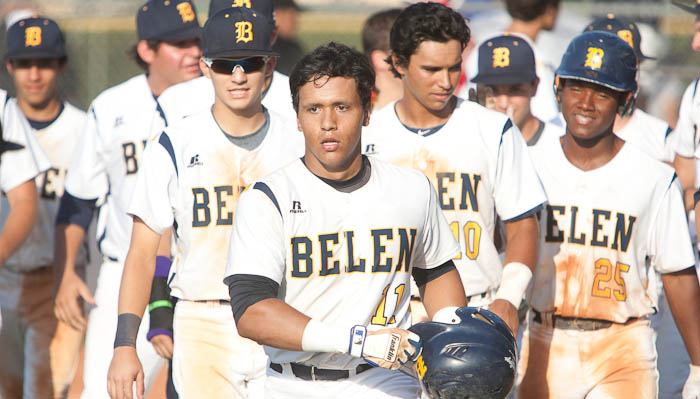 Wolverines’ Humberto Torres homered to tie the HSBN Game of the Week in the sixth inning.

For baseball purists who crave pitching and defense, the HSBN Game of the Week did not disappoint. Belen Jesuit hosted Doral Academy in a 7A-16 finale on Tuesday and after 10 innings a winner still could not be decided. Darkness ultimately won out and the two teams were left with settling for a 1-1 tie.

Pitching and defense ruled the afternoon from the opening pitch to the last, with Doral freshman shortstop Dominic Pitelli salvaging the tie by throwing out a runner at the plate for the game’s final out.

“We had a shot at the end that we had to take,” said Belen manager Jerry Albert of the crucial play. “We got the hit up the middle that Pitelli knocked down, ball rolling into short center field. So you’ve got to take that chance every time, make them make a play. He made a nice throw home and beat the runner.”

Both starting pitchers were outstanding. Daniel Brown went six innings for Belen, now 9-5-1 overall with a final 3-2-1 record in district play. Brown struck out eight and walked just two. He allowed only three hits. His counterpart, Jorge Perez, went five innings while yielding just two hits for Doral, 11-3-1 overall, and 5-0-1 in district play. Perez struck out three and worked around five walks to keep Belen off the scoreboard.

Both bullpens were equally impressive. Doral went to the pen three times, with Firebird relievers Alejandro Vieiro, Victor Cabrera and Brian Perez combining for five strong innings. The trio struck out eight and walked four, while giving up four hits.

Alejandro Torres worked four near-perfect innings in relief for the host Wolverines. The sophomore struck out five, did not walk a batter and did not give up a hit. He retired 12 of the 13 batters he faced, hitting one batter. 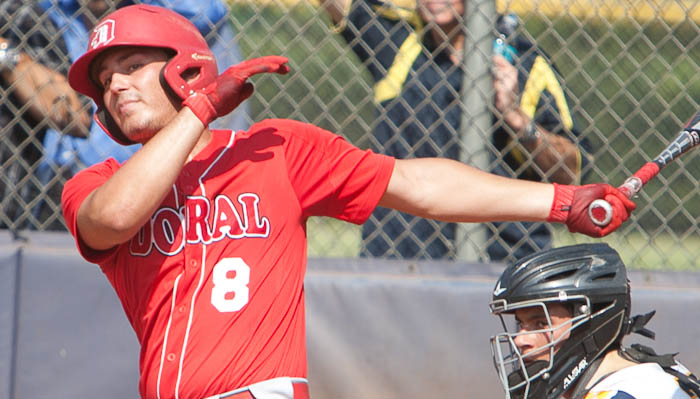 Doral’s Brian Perez takes a cut in a game Tuesday at Belen Jesuit. Perez drew a sixth-inning walk that led to the Firebirds’ only run of the game.

“It was a tremendous game,” Doral manager Ralph Suarez said. “Belen is well coached. They do a tremendous job. They make you work. We finished the district out without a loss, so that’s a good thing. We played pretty crisp defense. We just didn’t swing the bats today.”

Both teams scored in the sixth inning. Freshman Adrian Figueroa delivered Doral’s only run with a RBI single.

“I was just trying to put the ball in play,” said Figueroa, who hit a fastball away that scored Jason Pina, who was running for Brian Perez after Perez walked and stole second. “I was just looking for something to hit hard.”

Junior Humberto Torres tied the game in the bottom half of the inning with a leadoff homer.

“I went to the plate and I knew I had to do something special,” Torres said. “We weren’t really clicking on offense. I fought through the at-bat, got to a 3-2 count and he gave me a pitch I could handle. I did my best.”

Torres got a fastball in and drove it over the left field fence to make it a 1-1 game.

“It was a hard-fought game,” Torres said. “We weren’t able to pull it out in the end. We had a lot of opportunities. That’s baseball. It’s tough. But we know we’re going to see those guys eventually in the playoffs so we’ll get redemption soon enough.”

Leadoff hitter Eric Wilson had two hits in the game for Belen, which had a baserunner in every inning.