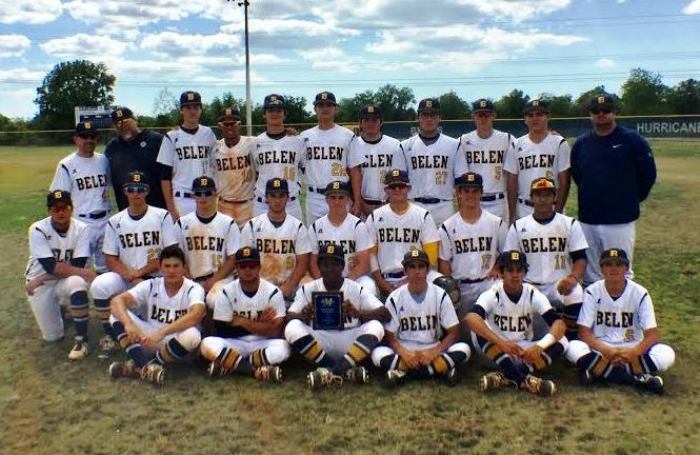 The Belen Jesuit Wolverines capped off a great Spring Break trip by winning the championship game Wednesday afternoon to take home the first-ever Bishop Bash title. Belen scored three runs in the top of the seventh inning to take the lead for good in a back-and-forth contest, and the Wolverines held on for an 11-9 win over Bishop McLaughlin.

Belen (15-5-1) tied things up in a special way by stealing home for the tying run. The offense worked in cohesion to move runners station-to-station and take control for good. The game had been a seesaw battle as the Wolverines took a big lead early, only to watch the Hurricanes (15-8) storm all the way back to go in front. Bishop McLaughlin had a six-run fourth inning, before plating three more runs in the bottom of the sixth to take a 9-8 lead. But Belen had one last response that made all the difference.

“It felt great, especially considering we had squandered the big lead,” Belen manager Jerry Albert said of the dramatic comeback. “Stealing home is always an exciting play, and everybody did what they were supposed to do that inning. We got a bunt down to move the runner and wound up with first-and-third after a two-out, infield hit. We got another hit to drive in the go-ahead run and then another one to make it 11-9. Zu came in and shut them down 1-2-3 in the seventh. It was a great week for us; we beat some very good teams and had two come-from-behind wins. We are very happy for the team to pull out the wins and come home with a tournament championship.”

Belen built a massive 8-0 lead over the first four innings as the offense erupted out of the gates and never looked back. The Wolverines had 14 hits as a team, as Erick Wilson led the way in going 3-for-5 with three RBIs and a run. Andrew Hernandez was 2-for-3 with a double and three RBIs, while Marcus Diaz went 3-for-4 and CJ Vazquez went 2-for-4 with two runs.

Jose Arevalo picked up the win in relief, and Alec Arrizurrieta earned the save by tossing a perfect frame in the bottom of the seventh. The junior struck out the first batter swinging, induced a liner to center for the next out and then finished it off with a called third strike that ended the game and started the championship celebration.