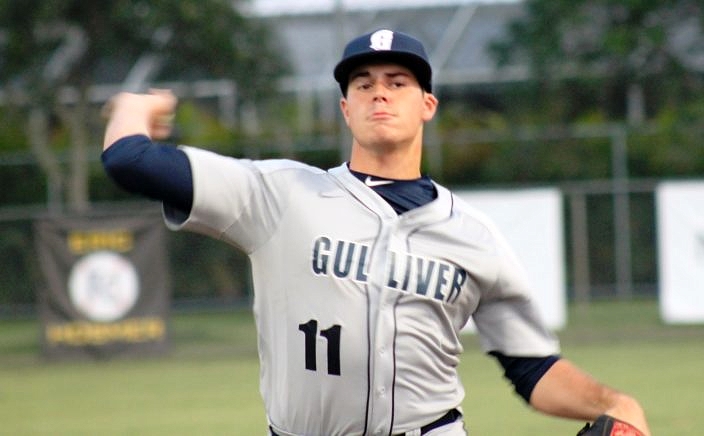 Michael Rothenberg will never forget his record-breaking home run on Wednesday. The Pine Crest senior broke the school’s career record for home runs in the bottom of the eighth inning, on a solo shot that gave Pine Crest a 5-4, walk-off victory over Gulliver Prep.

The two teams were competing in the final day of the Big 12 Challenge, facing off in a night contest at American Heritage High in Plantation. Both starting pitchers held control early on, and the offenses got going late in a seesaw contest in which the lead changed hands four times. Rothenberg came up leading off the bottom of the eighth and, after just missing one on the previous pitch, he reached down and connected through a low offering to drive it deep and over the right field fence for the walk-off home run.

“This was a great tournament,” Rothenberg said. “We played Doral on Monday and Gulliver is an awesome team. Jordan kept us in the game and he absolutely shoved and Jacob had a huge, bottom-of-the-seventh, two-out RBI base hit to tie the game. My teammates put me in a good situation and I came through today.”

The longball is the 20th of Rothenberg’s four-year career, breaking Zack Kone’s previous program record of 19 that he set in 2015. It is Rothenberg’s seventh homer of the season, moving him into first place among the Broward County leaders. It also delivered a big victory in a game the Panthers (14-7) nearly saw slip away.

The Raiders rallied for two runs in the top of the seventh to grab the lead, before Pine Crest responded with a run in the bottom half of the inning that forced extra baseball. Lucas Nido led off the inning with a double to right field, and Amin Hassan dropped down a sacrifice bunt that landed him at second base and allowed Nido to score following a throwing error. Raymond Gil then delivered again, driving a sac-fly to right field deep enough for Hassan to tag up and score the go-ahead run. 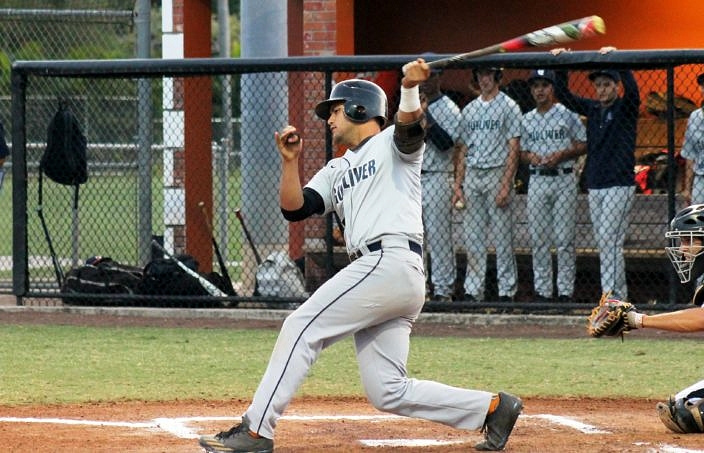 Raymond Gil connects for an RBI single that put Gulliver ahead in the top of the first inning.

The bats were quiet for both teams early on, as the two starters settled in quickly and dueled for five full innings. Pine Crest starter Jordan Schulefand surrendered his only run to the first batter of the game, as Jacob Marcos was hit by a pitch, advanced to second when Andres Machado walked and then scored thanks to an RBI single lined past third base off the bat of Raymond Gil. Schulefand allowed two more hits but nothing else, striking out 10 in five innings to keep his guys in the game.

Handed the lead before he took the mound, Gulliver starter Kevin Maura did his part to keep it intact. Singer reached on an error to start the first, but was erased on a 6-3 double play, and Maura then faced the minimum the first time through the order. He struck out the side in the second and picked up eight strikeouts in all, but did not factor in the decision.

It seemed as though Gulliver’s slim lead would hold, before the Panthers went ahead with three unearned runs in the fifth. Ryan Keenan lined a double to right field, Jake Kessinger walked and Nick Pagano reached on an error that loaded the bases. Pine Crest got on the scoreboard to tie the game when Singer reached on an error and Schulefand backed his own efforts by lining a single to right field that drove in two for a 3-1 lead.

The Raiders (13-8) answered right back to cut that deficit in half with one swing, as Adrian DelCastillo jumped on the first pitch of the sixth inning and sent it sailing into the night to deep center field on a shot that seemed to travel all the way back to Miami-Dade County. Gulliver then rallied to go back in front in the top of the seventh. 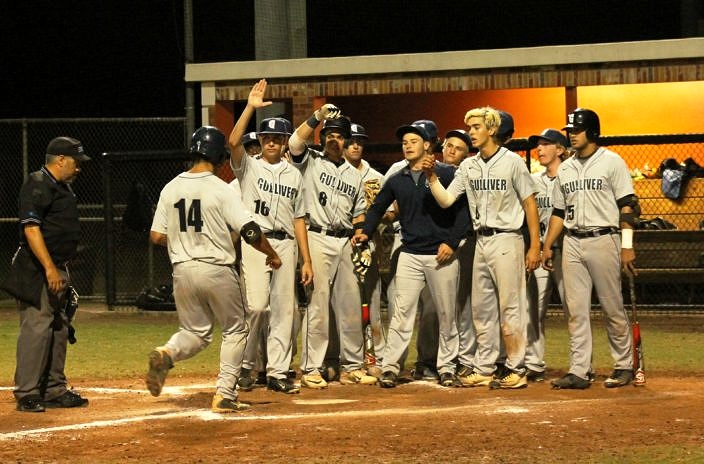 The Raiders welcome Adrian DelCastillo to home plate after his solo home run leading off the top of the sixth.