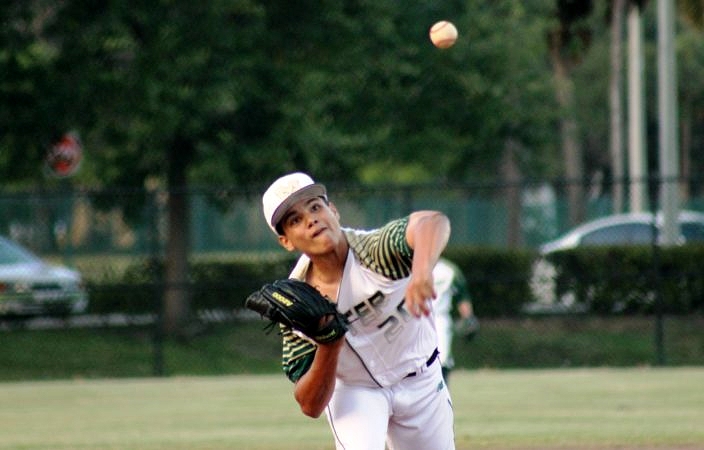 Ramses Hernandez piled up 10 strikeouts to earn the victory for the Lions.

Ramses Hernandez and Diego Marrero combined to hold Northeast scoreless and earn a 5-0 victory in Saturday’s opening-round contest, in the Black Bracket of the HSBN March Madness Shootout played at Pompano Municipal Park. The duo limited base runners and the offense collected nine hits to send the Lions (8-8) into a quarterfinal meeting with TERRA, after the Wolves defeated Stranahan on the other side of the bracket.

Ramses Hernandez set the tone early on and worked efficiently until leaving with one out in the sixth inning. The left-hander only allowed a hit to Ivan Perez and two walks, and piled up 10 strikeouts on 60 total pitches to earn the win.

Across the diamond, Northeast starter Jesse Haven was effective at keeping his guys in the ball game. The right-hander went five full innings while scattering eight hits and three walks, and he struck out five. Haven fell behind after allowing two runs in the second when Edgar Quintana scored on a wild pitch and Frankie Febles followed with an RBI single to push across Brandon Dudley, but clamped down and held the Lions scoreless over the next two frames.

Luis Diaz delivered the kill shot in the fifth when he connected for a three-run home run. Lewis Menendez and Alex Aguila both singled to start the inning, before Haven worked back to induce a pair of flyouts that nearly got him out of the inning before Diaz jumped on his first offering and sent it out of the park.

Marrero closed things out to earn the save, despite falling into trouble in the seventh. Ivan Collazo singled and the Hurricanes rallied to load the bases, but an infield grounder closed it out and preserved the shutout for the Lions.