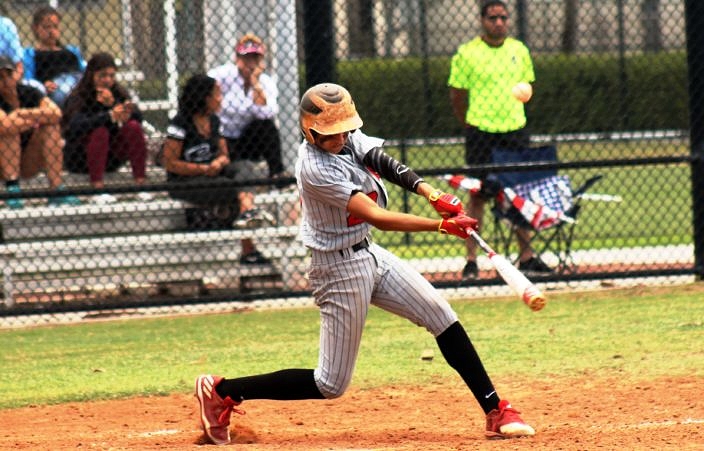 Jose Izzara connects for an RBI single as part of a three-run sixth inning that put the Victors ahead.

One of the draws of participating in the HSBN March Madness Shootout comes in the tough competition each team faces. Monday afternoon brought an exciting contest between the Miami Christian Victors and the Good Counsel Falcons, and the game proved every bit as tough as predicted. The lead changed hands four times and needed an extra inning to decide a victor, as Good Counsel held on for a 5-4 victory in eight innings.

CJ Kozorosky lined a single to left field that drove in Kenny Baer to give the Falcons (6-5) the lead in the top of the eighth inning. Baer had come in to run for Sam Smith, who had drawn a walk. Pat Hanrahan and Garrett Walker also earned free passes to load the bags and bring up Kozorosky, who fell behind 0-1 and then jumped on a pitch he liked.

Miami Christian (13-6) overcame a two-run hole and took the a 4-3 lead in the bottom of the sixth. Luis Rodriguez delivered with two outs to get things going, reaching with a double on a hard grounder to left. Omar Aguilar then traded placed with Rodriguez with an RBI double, and Jose Abreu walked to bring Jose Izarro to the plate. Izarro plunked an RBI single into right field, and Abreu later followed on an error.

Down to their final outs, Joey Goodwin lifted the Falcons up when he smacked a solo home run over the left field fence to even things back up and force extra innings.

The Falcons struck in the third for the first run of the game. Smith singled and gave way to Darian McAfee, who eventually swiped second after drawing a lot of attention from the pitcher. Mathew McVeigh then reached on an error and Huddleston followed with an RBI single for a 1-0 lead.

Miami Christian answered right back to tie it up in the bottom half of the frame. Nelson Porras singled and advanced on an error and then scored on an RBI single from Rafael Gomez. Gomez led all hitters by going 3-for-4, while Porras, Izarro, Connor Coursey and Mike Kohn all had multi-hit games.

Coursey and Kohn both singled and scored to put Good Counsel back ahead in the fourth.