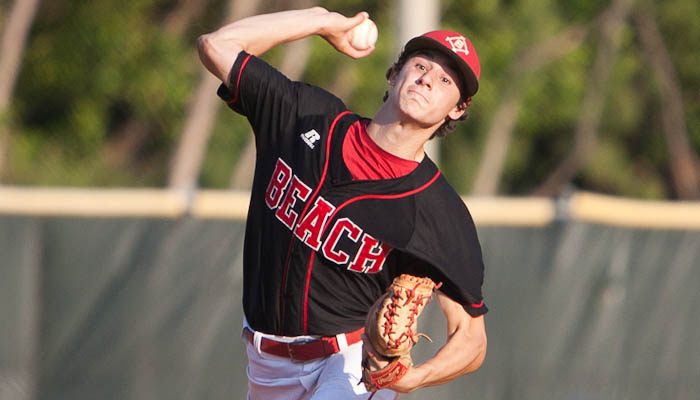 Miami Beach starter Nolan Santos delivers with a walk-off single in the seventh inning on Wednesday in the Hi-Tides’ 6-5 win at home over Varela.

Nolan Santos lined a bases-loaded, walk-off single with one out in the bottom of the seventh inning to lift Miami Beach to a 6-5 win over Varela on Wednesday, in the HSBN Miami-Dade Game of the Week at Flamingo Park in Miami Beach.

Santos, the Hi-Tides’ starting pitcher, drilled the winning hit down the first base line, scoring Eduardo Rodriguez, who opened the seventh inning with a double and was 2-for-4 for the night. Back-to-back intentional walks to Angel Vizcaino and Bailey Rodriguez loaded the bases.

“We had to walk everybody to get a force at home, but it didn’t work out,” said Jose Padron, manager of the Varela Vipers, who closed out their regular season with a record of 5-17.

Santos worked the first four-and-two-third innings on the mound for the Hi-Tides before giving way to Sam Weintraub, who picked up the win in relief with two-and-a-third stellar innings of no-hit ball. Santos, a sophomore, then won it at the plate.

“Everything I do here, I’m trying to make sure this is the senior’s best season here,” Santos said. “I know how much it means to them. It means everything to me to make sure they have a good time, and fun. And I’m just trying to get wins. So I come out here and do what I’ve got to do on the mound, and do the same thing in the batter’s box. I was waiting for a fastball, so I sat back on it, on the second pitch, and took it the other way.”

He said he’s been in similar situations, so the moment certainly wasn’t too big for the right-handed hitter. The grounder stayed just fair past the first-base bag.

The Hi-Tides improve to 13-8 for the year, and close out their regular season on Thursday at Champagnat before opening the playoffs with Coral Gables on Monday. 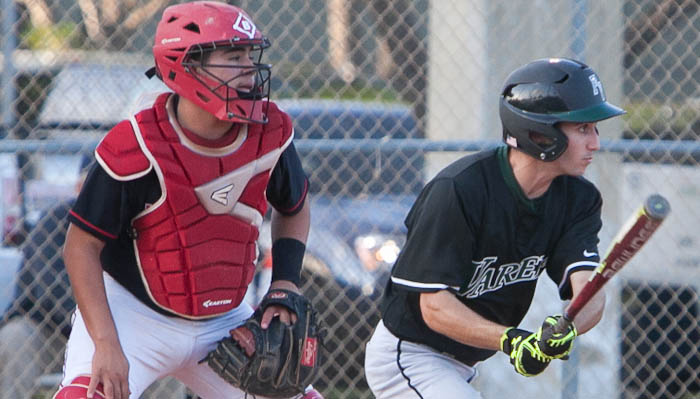 The Hi-Tides have had their share of bumps and bruises that they hope heal this week.

“I tell everybody, we’re a nice car with a flat spare tire,” Cordero said. “We’re just trying to heal right now and trying to get ready and try to make a nice little run in the playoffs.”

Miami Beach and Coral Gables split their two-game regular season series, each winning by a run.

The Hi-Tides spotted Varela a 2-0 lead before answering with two runs in the second inning. They added another run in the third to take a 3-2 lead, before Marcus Garcia delivered a two-run single in the fourth inning for what seemed to be a comfortable 5-2 lead.

“He did really well, which I’m proud of,” Coredero said of Garcia’s clutch hit. “He was in a little bit of a slump, but he got out of it and got some runs for us.”

But the Vipers tied it with a three-run sixth inning on singles from Anthony Artola, Adam Guerra, Andres Artola and Kevin Fernandez, setting the stage for a dramatic finish. 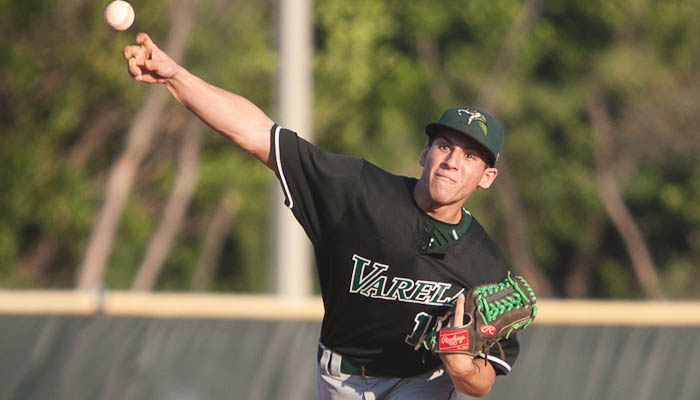