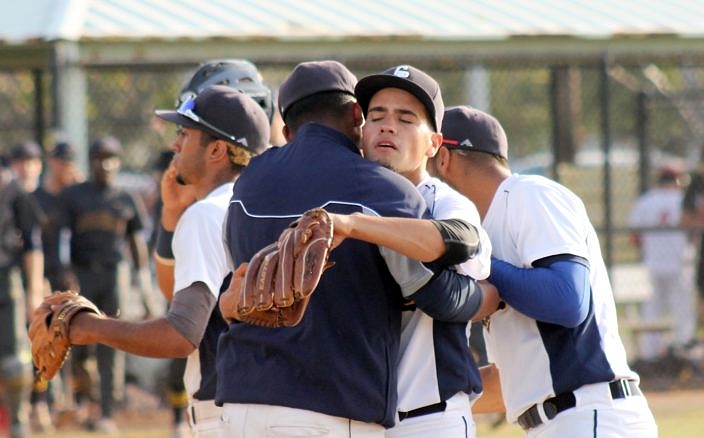 The Rams celebrate after their 7-2 win over the #2 seed St. Thomas Aquinas Raiders on Wednesday.

The Southwest Miami Eagles feel like they thrive in tournament environments. Wednesday night they backed that claim with a gritty, 8-5 victory in eight innings over the Monsignor Pace Spartans, in the HSBN March Madness Shootout Gold Bracket semifinals at Pompano 4 Fields in Pompano Beach. Southwest will take on Coral Park in Thursday night’s championship. The Rams advanced by also pulling off an upset, 7-2 victory over St. Thomas Aquinas in the other semifinal.

Southwest takes the lead in the 8th!

The Eagles (10-8) came in as the #13 seed in the 16-team bracket, and managed upsets over #4 Miami Christian and #5 Coral Springs to reach the semifinals. Three runs in the top of the eighth inning then gave them the lead for good to pull the upset over the Spartans (18-2), the top seed in the tournament and also the top ranked team in the current HSBN Miami-Dade Power Rankings.

“It was a great ball game all the way around,” Southwest Miami manager Mandy Palaez said. “It was give-and-take and our starter, Mario Garcia, held them down and we didn’t make some plays behind him that caused him some extra base runners. But we fought back. We consider ourselves a tournament team and one of our goals was to win this, and we are in a pretty good situation now in the championship game to come back tomorrow and continue with some momentum. That’s a very good team with a lot of talent over there, and we’re proud of our guys for sticking to it and figuring out a way to win the ball game. It was a good game all around.”

Mario Garcia held Pace hitless over the first four innings, while the Eagles jumped in front with two runs in the first. The Spartans answered back with a run in the bottom half of the first, and the Eagles added a run in the third. Danny Cruz and Justin Worley both hit home runs to help Southwest pull ahead 5-1, before Jeter Downs responded with a homer to help Pace rally back with three runs in the fifth.

The Spartans tallied an unearned run to even things up in the seventh to force extra innings.

Final out! Southwest to the title game of the March Madness Shootout!

Junior catcher Jorge Tejeda put Southwest ahead for good when he dropped a triple into the right-center field gap to drive in a pair. Right-hander Erick Orbeta then came on in relief of Kike Aparicio to close it out and earn the save.

The Rams (13-5) had just as tough of a road to the finals, having come in as the #14 seed. Coral Park upset #3 Killian in the opening round and then defeated #6 Goleman in the quarterfinals, before taking down the #2 St. Thomas Aquinas Raiders on Wednesday.

Two runs in the top of the first put Coral Park in control right away, and a four-run fifth inning helped put things out of reach. Axel Gomez had a two-RBI single in the first, and then added a two-run home run in the fifth that electrified his teammates and fans.

Erwing Hernandez had a big day from the leadoff spot, going 3-for-4 with an RBI double that drove in William Silva to put Coral Park ahead for good in the third. Hernandez also scored two runs, and Robert Contreras went 2-for-4 with two runs.

The Raiders (14-5) scored both their runs in the second. Chris Valencia singled and advanced on an error and Jaret Kappelman walked to put ducks on the pond. Jake Buxbaum delivered an RBI single and Aaron Antonini followed with a sac-fly RBI that made it a 2-2 ball game.