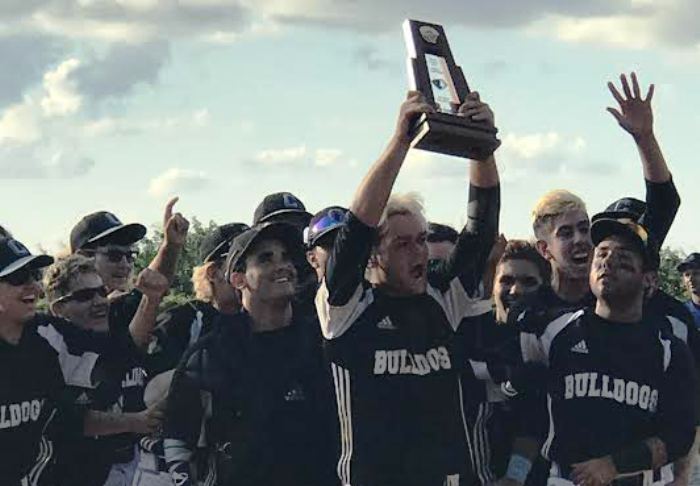 The Bulldogs celebrate after winning the regional championship on Tuesday.

The Archbishop Carroll Bulldogs have been a tough team to defeat this season, carrying one of the longest winning streaks in the state into Tuesday 3A regional championship. The Bulldogs continued to show the tenacity and determination as they rallied late for a 6-5 victory over Highlands Christian to cliam the regional trophy.

Archbishop Carroll moves on to next week’s state tournament at Hammond Stadium in Fort Myers, where the Bulldogs (26-2) will take on University Christian in a state semifinal. The Christians (19-8) advanced with a 7-5 win over Maclay.

Trailing 5-0 after three innings, Archbishop Carroll went to work on the comeback. Jonathan Leon helped change their fortunes with one swing, as he smacked a two-run home run to get the Bulldogs on the scoreboard in the fourth. Leon’s next time through the order he helped his team by not swinging the bat, instead working an RBI walk after Ricky Alvarez, Ryan Pereda and Rey Gonce also walked to begin the fifth.

Chris Fernandez delivered a sac-fly RBI to pull the Bulldogs within a run, and Sal Lorenzo completed the rally with a two-RBI single on a liner to right field. Lorenzo also went six strong innings on the mound, and Alfredo Silva struck out two during a scoreless seventh that finished things off.

Archbishop Carroll extended its winning streak to 20 games, dating back to its last loss on March 13th to Gulliver Prep. The team has not lost a game in over two full months.