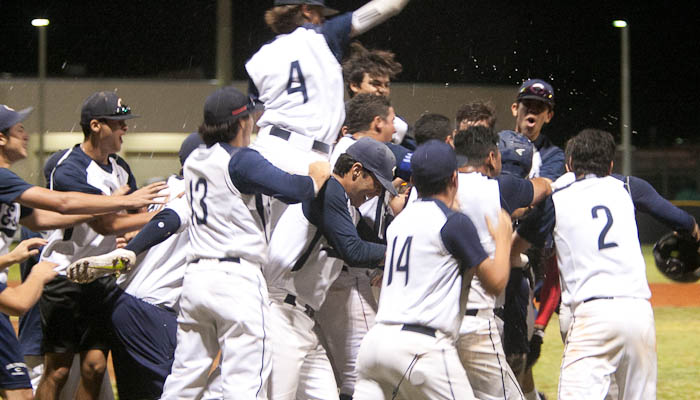 The celebration is on as Columbus rallies to win 3-2 in eight innings over Southwest in the division finals Tuesday at Andre Dawson Field. The Explorers score twice in the seventh inning to send the game into extra innings.

Columbus scored two in the seventh and won it with a walk-off run in the eighth, outlasting Southwest 3-2 late Tuesday night at Andre Dawson Field on the campus of Southwest High.

Though the district tournament is being played at Southwest, it was Columbus, now 25-2 and ranked No. 4 in the HSBN Miami-Dade Power Rankings, that was designated as the home team. The Explorers took advantage of that late.

As the clock neared midnight, the Explorers saved their best for last, surviving through a belated start to their game because of a late finish to the preceding game on the same field, then a rain delay, and a steady rain throughout the game, before finally rallying from a 2-0 deficit in their final at-bat.

Kevin Acosta walked and scored ahead of teammate Danny Martin when Southwest was unable to turn a double play that would have ended the game. But with the bases loaded, a low throw on the pivot to first base allowed both to cross the plate with the tying runs.

“They never quit,” Columbus manager Joe Weber said. “They’ve played a lot of close games this year. They fought and were resilient. I’m really proud of these guys.”

An inning later, Acosta lifted a sacrifice fly ball that scored Mike Fernandez with the winning run. Fernandez opened the eighth with a single, and he had two of the Explorers’ three hits for the game.

“I was just thinking, ‘hit the ball in the air somewhere,'” Acosta said. “It was a short, contact-swing to opposite field, and I got the job done. I didn’t even get to first base; I was just looking at home.”

It was a tough defeat for the Eagles after such a tough battle against their rivals.

“I’m proud of our guys for coming out ready to compete,” Southwest manager Mandy Pelaez said of his team, which finished the season with a record of 11-13. “We just couldn’t get that 21st out. That’s the way it goes sometimes, unfortunately. It’s a tough one, especially for our group of seniors.” 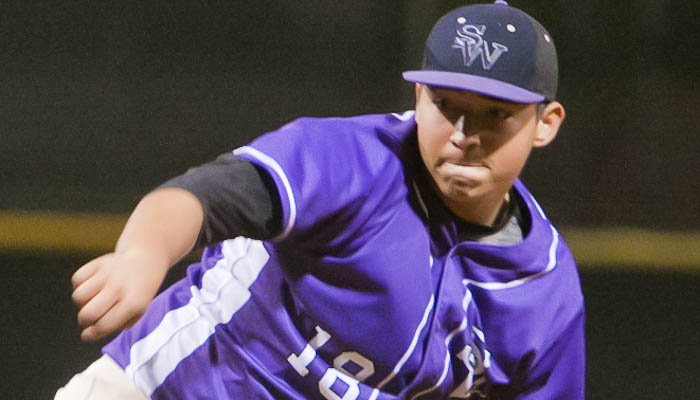 Southwest pitcher Kiki Aparicio follows through on a deliver in Tuesday’s game. Aparicio went six innings and allowed just one hit while striking out 10 in the Eagles’ 3-2 eight-inning loss to Columbus.

The Explorers could do nothing with Southwest starting pitcher Kike Aparicio, who was nothing short of marvelous through six innings of one-hit ball. The junior right-hander struck out 10 and did not give up a hit past the first inning.

But when he walked Acosta with his 102nd pitch to lead off the seventh inning, Pelaez went to his bullpen.

“I wanted him to get a complete game,” Pelaez said. “But he was up on the pitch count.”

Southwest built a 2-0 lead with single markers in the second and fourth innings. Eddie Sierra drove in both runs with RBI singles.

The Eagles threatened to put the game out of reach in the sixth inning with runners on second and third with no outs. But Explorers reliever Christopher Mederos put out the fire with a pair of strikeouts and a fly out.

That kept the score close and set the stage for late game heroics. 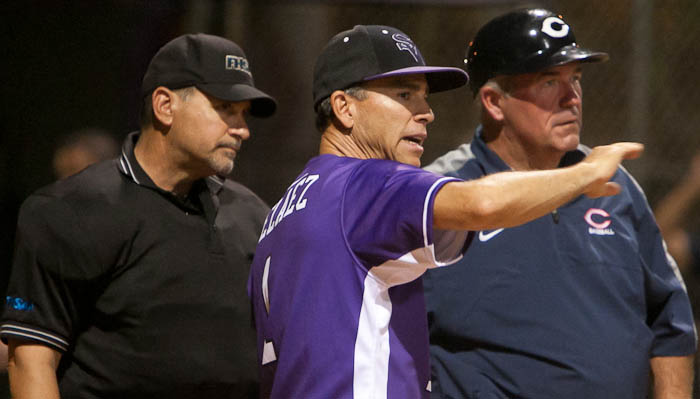 Southwest manager Mandy Pelaez goes over the ground rules with the umpire and Columbus manager Joe Weber prior to Tuesday’s game won by the Explorers, 3-2, in eight innings.