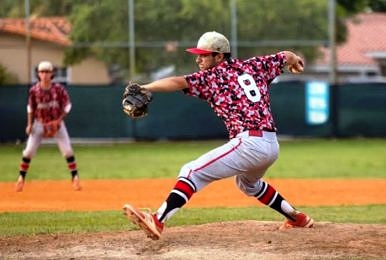 John Kenney got things started for the Cavaliers. [Photo courtesy of Kelli Willis].

It has been 22 years since the Coral Gables Cavaliers last won a regional championship. That wait may finally be over, after Gables defeated Coral Park 4-3 in nine innings on Tuesday to advance to the 9A regional finals. The Cavaliers will next face Palmetto on Tuesday afternoon at Coral Reef Park to decide the regional title.

Junior shortstop Nicholas Montes lined an RBI single back to the pitcher to drive in Bryan Vargas for the deciding run in the top of the ninth to give Coral Gables the lead for good. The Cavaliers (13-13) broke out to a 3-0 lead with a run in the second and two in the third, before the Rams rallied back to even things up and force extra innings. Juan Osorio led the way with a 3-for-4 day that included an RBI and a run.

The seesaw results came as little surprise after the way the two district rivals battled all season. Gables evened up the season series at 2-2 following Tuesday’s win, getting the final win that mattered to advance and end the rival Rams’ season.

Coral Park (20-8) did not go quietly. Every starter reached base to contribute and rally to keep hope alive. Axel Gomez was 2-for-4 with a double and two RBIs to lead the way, and Eduardo Diaz went 1-for-2 with a double, walked twice and scored.