Hialeah Gardens Walks Off Over Dr. Krop In 9A-13 Finals 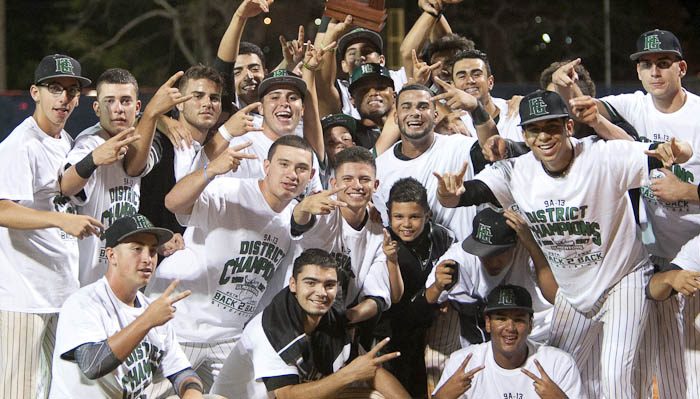 Hialeah Gardens players pose for a picture minutes after winning the 9A-13 title with a dramatic walk-off 7-6 win over Dr. Krop on Wednesday.

It was like the same song; second verse. Hialeah Gardens won a walk-off, 7-6 victory over Dr. Krop in late-March, and then on Wednesday did the exact same thing, by the same score. Only this time the stakes were a little bit higher.

When Jonathan Sosa delivered a walk-off single in the bottom of the seventh inning on Wednesday, it won a second consecutive district title for the Gladiators (16-9). Sosa’s single plated Iroel Ruiz with the deciding run after the Lightning (9-17) struck for three runs in the top half of the seventh inning to tie the game.

“I’m so ecstatic about my guys pulling this off,” Hialeah Gardens manager Carlos Garcia said. “Our motto has been ‘WUT’ and that’s ‘We, Us, Together’. That’s how we accomplished our goals. We set our goals. We wanted to be the first baseball team in our program to go back-to-back. So we’ll celebrate today, and maybe tomorrow, with the kids at school and then start preparing for our next challenge on Tuesday.”

The Gladiators are beginning to make dramatic victories a habit. Winners in eight of their last ten games, four have been walk-offs. Sosa sat on a 2-0 pitch and drilled it to right-center field like he had done it before, as so many Gladiators have recently.

“I just had ice in my veins,” said Sosa, who went 2-for-3 with a stolen base and a run scored. “I was just looking for straight fastball. It’s just crazy, this team is awesome. This is like my second family right here. We don’t quit. We play 21 outs.”

Hialeah Gardens battled back from deficits of 1-0 and 2-1. A three-run fifth inning gave the Gladiators a 5-3 lead before adding what appeared to be an insurance run in the sixth for a 6-3 lead heading into the seventh inning.

But it turned out they needed every run. 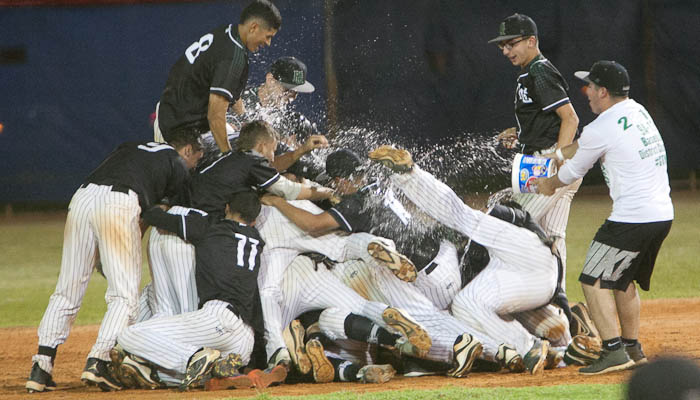 Hialeah Gardens players dog pile near second base after a 7-6 walk-off win over Dr. Krop in the 9A-13 finals on Wednesday.

The Gladiators strung together four of their eight hits in the fifth inning, all singles. Manny Mollinedo, Nathan Llanes, Jason Aguilar and Ruiz hit safely in the inning. They were helped along with good at-bats from Levis Aguila and Alex Curiel, who both drew walks to keep the rally going.

They didn’t do much through three innings against Dr. Krop starter Adam Singer. But they broke through for two runs in the fourth inning when Curiel was hit by a pitch, stole second and scored on a single by Emmanuelle Iglesias, who also scored on a bases-loaded walk to Jorge Burgos.

But Dr. Krop refused to go down without a fight, tying the game in the seventh on a double by Raul Torres.

“We’ve scrapped all year,” Dr. Krop manager Paul Barrios said. “We had a lot of doubters. But in the last two weeks, this team has found something within themselves. We’re still alive. We could play these guys again. I’m proud of them, and the experience the younger players are getting, I can’t simulate that at all.”

Should both clubs win their regional quarterfinal playoff game next week, they would meet again in the regional semifinals.

Senior right-hander Felipe Soto got the win in relief for Hialeah Gardens. He pitched the final two-and-two-third innings, giving up just one walk and three hits while striking out four. Soto put out a fifth-inning fire after the Lightning grabbed a 3-2 lead with two runs in the inning. But with runners at first and third and only one out, Soto struck out the first two batters he faced to end the threat. 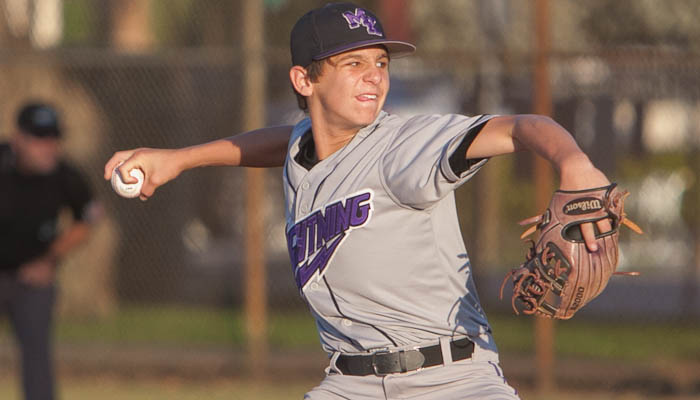