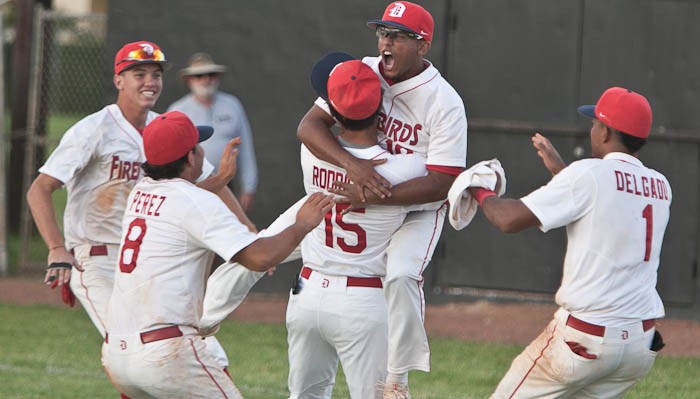 Doral pitcher Chauncey Nunez leaps into the arms of teammate Edgar Rodriguez after the Firebirds recorded the final out of their 8-2 win over Belen Jesuit on Thursday in the 7A-16 finals at Sunset High.

Adrian Figueroa and Jose Garcia each belted two-run home runs and Chauncey Nunez worked two innings of solid relief to earn a save in Doral Academy’s 8-2 win over Belen Jesuit on Thursday, in the 7A-16 finals at Raul Ibanez Field on the campus of Sunset High.

Figueroa, the Firebirds’ lefty-hitting freshman first baseman, slapped a second-inning homer over the right field fence that highlighted a four-run rally and broke a scoreless tie. The senior catcher Garcia punctuated a three-run sixth inning with a prestigious blast that cleared the left field fence in a hurry.

“After the first two pitchers I noticed that I wasn’t locked in,” Garcia said. “So I just tried to compose myself, slow the game down, and really try to really read it off his hand. I zoned in and it happened.”

It was certainly a big win, as the program has captured two of the last three district titles. But still Doral Academy manager Ralph Suarez didn’t even want to take a district championship team photo after the game. He instead promised he would invite all the paparazzi Doral can gather up when the team is triumphant at regionals.

“I’m very proud of all the kids, but to me, until we get to the Final Four, we haven’t done our job,” Suarez said. “That’s where I set my goal for my team. Still, I’m very happy for the kids. We lost to Belen last year and they got to the Final Four, so hopefully this is a good omen for us.”

Garcia hit a 3-2 curveball on a line, easily clearing the fence down the left-field line.

“It looked big,” Garcia said of the pitch. “I knew he wasn’t going to challenge me again with a fastball – although you never know. I was sitting fastball and then reacting to anything else. I put a pretty good swing to it.”

Nunez slammed the door with two innings of one-hit relief work. The senior entered for starting and winning pitcher Oscar Trujillo with the Firebirds clinging to a 5-2 lead. Nunez inherited runners on second and third with nobody out. But with the potential tying run coming to the plate, Trujillo proceeded to strike out the next three batters. He closed it out in the seventh with a pair of strikeouts. 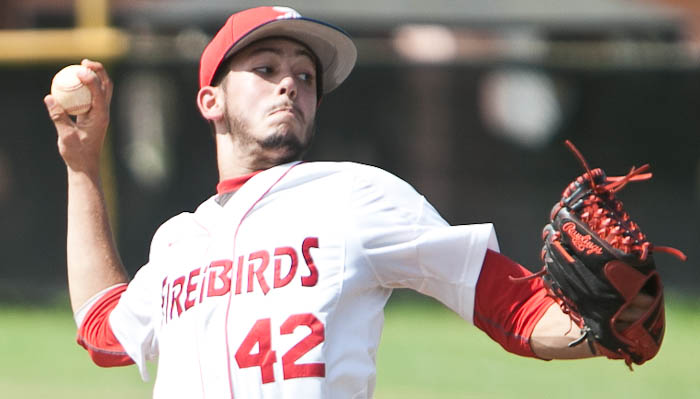 Doral starting pitcher Oscar Trujillo delivers in the early innings of the Firebirds’ 8-2 win over Belen Jesuit in the 7A-16 finals on Thursday. Trujillo got the win with five innings of work. He struck out four.

The victory was a sweet one for the Firebirds (18-7-2), but it’s only a stepping stone in what this team wants to accomplish this season.

“This is just a ticket towards the next step, which is regional, then reach our major goal as a team and what we’ve played for and practiced for the whole year,” Nunez said.

For the Wolverines (19-6-1), Gabriel DeZendegui, Armando Albert and Gabriel Trastoy had two hits each to lead a 10-hit attack. Jonathan Barditch added a double and Marcus Diaz drove in a run for a Belen Jesuit team that saw its 10-game win streak snapped.

The Wolverines hadn’t lost a game in their last 15, tying once with these same Firebirds.

“We didn’t make plays we have to make,” Belen Jesuit manager Jerry Albert said. “The season isn’t over. We move on to the regionals and that’s that. We’ve been playing great baseball. If we’re going to have a hiccup, we might as well have a hiccup in a game where we still advance. So we’re not worried about anything. We’ll have a nice little workout tomorrow; we’re right back on track focusing on our next game.”

Suarez is hopeful that playing one of the toughest schedules around will help prepare his team for the postseason, which begins on Tuesday with the regional quarterfinals.

“We played an SEC schedule,” Suarez said. “Five of our seven losses were by one run. Other than the Heritage game and the first game we played in the National Classic, we could easily be 25-2. People don’t take into account what kind of schedule we’ve played. We’ve seen quality pitching.” 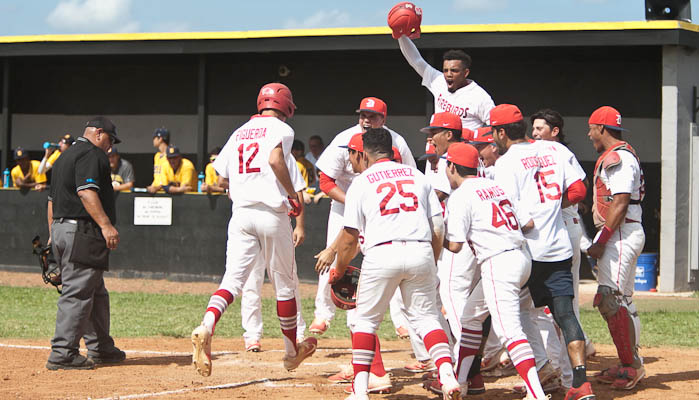 Doral freshman first baseman Adrian Figueroa steps on the plate after hitting a second-inning homer while his teammates wait to greet him in the Firebirds’ 8-2 win over Belen Jesuit on Thursday.