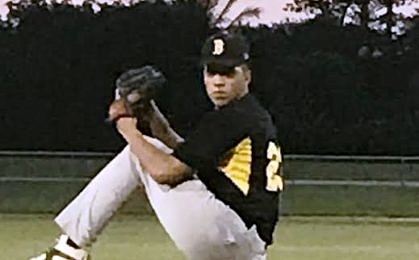 Hector Garcia went the distance and took the loss for Brito.

Fittingly, the ball landed in the glove of closer Angel Tiburcio to end the game.

Trinity Christian’s right-hander pitched lights out in the Warriors’ 3-2 win over Miami Brito in the 2A regional semifinals on Wednesday night. After starting the game at first base, Tiburcio picked up the victory, going three-and-a-third shutout innings, allowing two hits and two walks, while striking out four.

Tiburcio entered the game as a reliever in the bottom of the fourth with two on and two out, before retiring Alexis Dominguez on a comebacker to the mound to end the threat.

“I’m comfortable coming in in relief,” Tiburcio said. “I know I have to do it for my team. I was a little shaky at first, not 100% with my throwing arm, but I felt more comfortable as the game went on.”

Because Tiburcio felt more comfortable as the game advanced, Trinity Christian (19-6) gets a shot at the regional title, when it travels to face Miami Christian on Tuesday.

“My fastball was a little out of control, but the slider and changeup were spot on,” said Tibrucio, who said he did top out at 91 miles per hour with the fastball. “I wasn’t as pinpoint accurate with the fastball, but the velocity was there. I trusted my coaches, trusted my pitches and kept the hitters off balance. That’s about it.”

With the tying run on second and the winning run on first, Tiburcio snared a hard liner back to the mound from Jefrey Rodriguez for the ballgame’s final out.

“That was a big moment there,” Tiburcio said. “Both team’s crowds were cheering, and I sealed the deal. That’s the best feeling: hearing our crowd cheer last.”

Rodriguez, whose RBI double to center field scored Alex Nino to give Miami Brito (14-10) a 1-0 lead in the top of the first, tipped his cap to Tiburcio.

“What can I say? He threw well,” said Rodriguez, who scored on an RBI single by Carlos Perez to give the Panthers a two-run lead at the end of a half-inning of play. “We had a big first inning, but just couldn’t come through when we needed it most.”

Jorge Zambrano played a role in all three runs for the Warriors in their three-run second. First, Zambrano’s two-run single plated David Yourke’s pinch-runner, Serwin Kastaneer, and Miguel Lavin to tie it at two. Then, with runners on the corners and two outs, Tyler Hall scored on a double steal to give Trinity Christian a 3-2 lead, thanks to Zambrano sliding in safely after a throw down to second.

“I was looking for a pitch to hit. Anything to make contact with two strikes,” Zambrano said. “If I got anything close, I was hacking. It wasn’t a great pitch to hit, but it was close, so all I did was make contact and it found the hole.”

Yourke admitted he didn’t have his best stuff, but wasn’t looking to make excuses. After leaving the mound, Yourke replaced Tiburcio at first.

“I hadn’t pitched in a month, but I kept us in there,” said Yourke, who pitched three-and-two-third innings, allowing an earned run on three hits, striking out four and walking two. “Angel’s stuff is great. I thought he threw a great game, considering he didn’t have much time to warm up.”

Hector Garcia loosened up as the game moved along, going the distance for the Panthers. Garcia pitched six innings, allowing three runs on seven hits, while striking out five and walking five.

“I had pain in my throwing arm early. I was over-thinking,” Garcia said. “But I did what I had to do. As a team, we gave everything we had.”

“We had a bad inning and that cost us,” Fundora said. “This was the first time we saw Tiburcio, and he got us. He was gutsy. Tip your hat. We didn’t get rattled. He had good velocity on his fastball and his slider was good.”

Trinity Christian manager Miguel Cuello had all the confidence in the world in his closer.