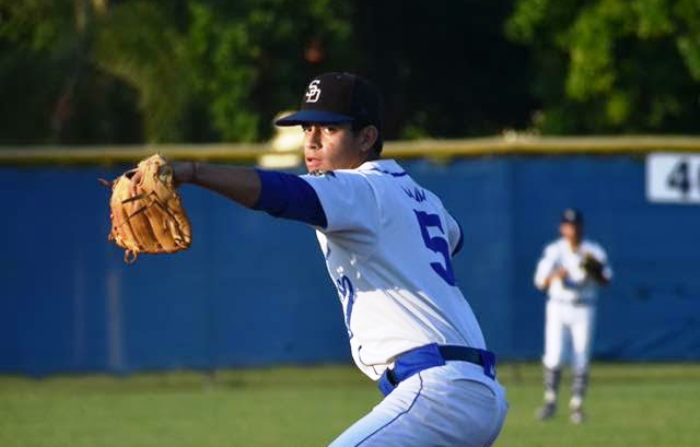 Yamil Chavarria struck out four in six innings to earn the win for South Dade. [Photo courtesy of David Houtz].

The South Dade Buccaneers have enjoyed some special moments in the playoffs over the past several years. Tuesday night the program added another exciting chapter as it held on for a 5-3 win over Braddock in a 9A regional quarterfinal. With a new manager in Rene Ruiz and almost an entirely new roster this season, the team defied expectations by winning its fourth straight district title following shutouts over Killian and Palmetto. That had the 9A-16 champions hosting the Bulldogs in the regional opener, where Yamil Chavarria tossed six strong innings and Willy Escala led the way offensively to pave the way to victory.

Chavarria allowed one earned run on four hits and three walks, and he struck out four. Luis Urguiaga came on the seventh, working around a base hit to Erickmay Simancas to record the save and preserve the win for the Bucs (14-11). South Dade will host Palmetto in a rematch of the district title game in next week’s regional semifinals.

The Bulldogs (14-11) did not go down quietly, jumping out to a 2-0 lead in the first inning and battling right to the very end. Miguel Rivera reached on an error to start the game, advanced thanks to a sacrifice bunt from Jesus Barraza and later scored on an infield error. Yohandy Morales also reached on a fielder’s choice and then scored on an RBI single from Yandy Morales.

The Bucs answered right back in the bottom of the first to tie it back up with runs from Escala and Jose Zepeda, before taking the lead when Escala delivered a sac-fly RBI that plated Hasani Clarit in the second. After Michael Leon scored on an RBI from Miguel Rivera, Clarit scored on a wild pitch and Escala delivered again with an RBI triple that gave South Dade a valuable insurance run in the fourth.