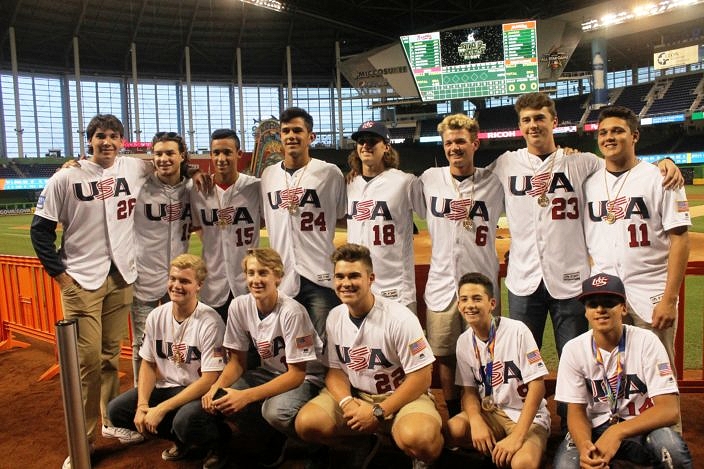 Members of USA Baseball’s 12U, 15U and 18U championship teams at Miami Marlins Park on Saturday night.

It was a special summer for several of USA Baseball’s teams, with success that culminated in gold medals for the 12U, 15U and 18U clubs. Saturday evening the Miami Marlins honored and recognized members of those teams with a special salute on the field prior to the start of their game against the Atlanta Braves. Fans in attendance witnessed a collection of special players that were applauded for accomplishments they achieved the way any baseball fan would want to see it done.

Chemistry and camaraderie was the driving force for these clubs, providing the key ingredient for teams that were already loaded with the top talent from across the nation. Despite little time to play and learn each other together, these groups came together and played for one another in the way that all victorious teams must do. That bond was just as evident on Saturday night, with the players relishing in their moment together in a way that would make one believe those friendships are cultivated through daily experiences and not exhibited between guys that were last all together several weeks ago.

“It was great just to get back here with all of my brothers again, and interacting with them was awesome. I love these guys,” said Dylan Crews, a member of the 15U team who is from Orlando. “We had great chemistry every day and every night, and we would hang out and it was a blast every single night.”

Crews was one of nine players honored Saturday from the 15U squad, which earned the co-championship along with the Dominican Republic in the 15U Pan American Championship in Cartagena, Colombia, after the game was cancelled due to rain after 3 ½ innings. Also attending Saturday’s ceremony from that team were Florida’s Nelson Berkwich, Michael Brooks, Mac Guscette, Giuseppe Ferraro and Alejandro Rosario, North Carolina’s Josh Hartle, Alabama’s Grant Taylor and Georgia’s Alek Boychuk.

Florida’s Tristan Casas and Raynel Delgado represented the 18U team on Saturday, after the two helped their squad win its fourth consecutive World Baseball Softball Championship 18U World Cup with an 8-0 victory over Korea. The team went 9-0 in the WBSC, the only other undefeated team since the 1989 club went 7-0. It is the ninth gold medal for Team USA’s 18U club. 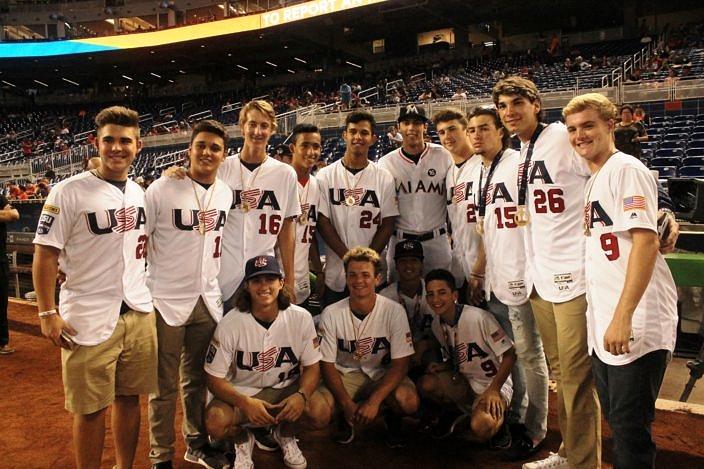 The players enjoyed a chance to hang out with Christian Yelich while on the field.

Two local members of the 12U club also attended, as Davie’s Spencer Butt and Hialeah’s Brandon Olivera were honored for their part in helping the 12U squad win the WBSC U-12 World Cup with a 7-2 win over Chinese Taipei. 15U Assistant Coach Troy Cameron, USA Director of Baseball Operations Donnie Platt and MLB Security Advisor Jorge Herrera also went to applaud the players.

The experience was important enough that several of them traveled by airplane just to come and be a part of it. Being there was a reward worth enjoying, but seeing the way the players interacted and enjoyed it together made it abundantly clear that they also just wanted one last chance to hang out together at the baseball field.

“It’s insane how USA Baseball put all of this together,” Grant Taylor said, after flying in from Alabama to attend. “It’s an amazing opportunity. It’s not every day that you get to go meet Christian Yelich and go take a picture with him on the Marlins’ field.”

This rare moment was something the entire group enjoyed together. Yelich, himself a member of the 2017 World Baseball Classic championship team, was honored to meet the guys. He spent about ten minutes with the players talking baseball and also posing for a picture with each of them.

“This was an honor and you don’t get to meet people like that every day,” Michael Brooks said. “He is a great person, a great teammate and a great all-around player. I know he is busy right before a game, and he took the time to talk to us. It was just an honor.”

The chance to play for the USA and experience baseball against other nations on foreign soil was also a special experience for the players. The chance to see how other countries employ strategies and team focus is a rare opportunity to expand one’s knowledge and understanding of the game. Then they get to compete against those differences while playing for their own country, where baseball was born. 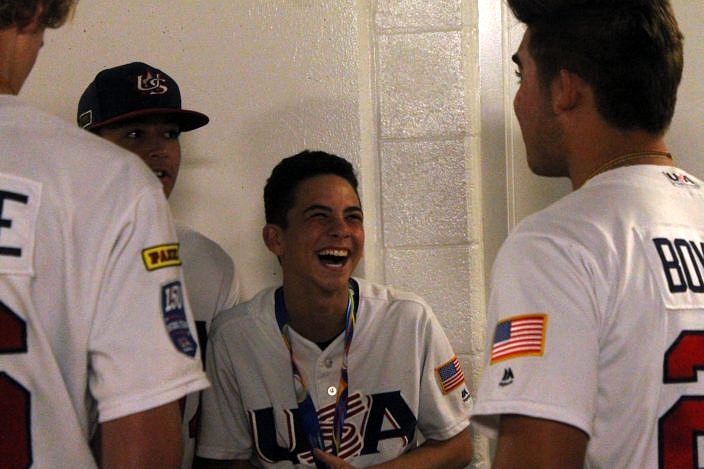 “We had great chemistry every day and every night, and we would hang out and it was a blast every single night.”

The teams played a lot of games in a short period of time. They were put to the test the entire way, a process that continued off the field as well.

“It was a constant grind,” Taylor said. “It was baseball from when you woke up to when you went to sleep. You had to figure out a way eating not as much as you wanted to and feeling like you had to store your energy and take naps. We had to grind everything out.”

Although so much was a different, unique and new experience, some things still felt like home. For South Florida natives like Michael Brooks, playing in Colombia felt like home in some ways.

“It kind of reminded me of Florida. It was really humid and it rained a lot,” Brooks said.