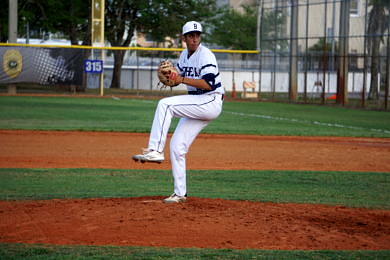 After back-to-back losses to Mater Lakes and Miami Country Day, the Hialeah Educational Academy Bulldogs bounced back with a 5-1 victory over Miami Brito, thanks to another complete-game gem by senior right-hander Alejandro Caballero.

“The boys came out ready to play from the first pitch to the last pitch, which is something we didn’t do last week,” said Bulldogs manager Willy Baez. “We haven’t been finishing games and that’s why we’ve been losing, but today we got the 21 outs we needed.”

Caballero, who pitched a complete game-shutout in his last outing against Highlands Christian, allowed one run in seven innings of work, and punched out six.

“We needed this one,” Caballero said. “After our two heart-breaking losses last week, we knew we had to get this one and carry some momentum going forward. I try to prepare myself mentally before every start to give our team a chance to win.”

Baez said Caballero did not want to come out of the game.

“He asked me if he could finish the game, and he did just that,” Baez said.

The Bulldog bats were led by senior infielder Emilio Ferrer, who went 3-for-4 on the day with a run scored.

“I felt great, especially after a couple games I didn’t get on base that much. I thank God for the three hits I got today,” Ferrer said. “I’m seeing the ball a little bit more, trying to take short, quick swings and tried to put the ball in play.” 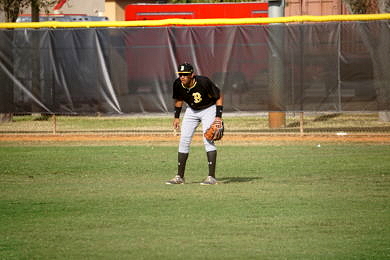 “The bats came alive with runners on, and we were aggressive on the bases today,” stated Bulldogs Hitting Coach Jesus Castro. Castro wants his hitters to be more aggressive at the plate going forward. “We let a lot of good pitches go to waste, but we still got the job done today.”

Miami Brito’s starting pitcher, Joshua Flores, was chased in the third, after 2.1 innings pitched. He had two strikeouts in the outing.

The Panthers were held in check until the top of the fifth. After Alex Nino reached on an error, and advanced to second on a passed ball, senior infielder Yoanny Carrizo drove in Nino with an RBI single to make it a three-run game.

The Bulldogs answered right back with a run of their own in the bottom half. Junior first basemen Idiar Garcia drove in Bryan Pazos with an RBI double down the left field line.

The Panthers got something cooking in the top of the sixth after singles by Jose Aquino and Yohan Canel, but a base running mistake ended the rally. They were led offensively by Jose Aquino, who had a couple of singles on the day. Yoanny Carrizo, Luis Ruiz, Yohan Canel, and Anthony Hernandez each had a hit. 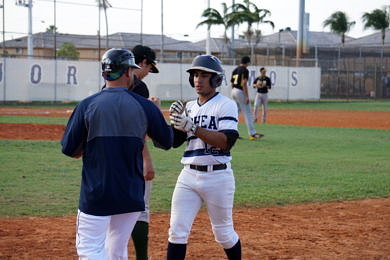 Emilio Ferrer after his third hit of the day.

“We didn’t swing the bats the way we’re supposed to and couldn’t make adjustments at the plate,” Miami Brito manager Laz Fundora said. Fundora says his team looked a bit lost in some game situations. “We played bad baseball. Pitching was alright, and we did our job defensively, but our mistakes cost us today.”

The Panthers now (3-1) will look to make adjustments before their district match-up against Miami Christian on March 6th.

The Bulldogs (2-2) look to pick up where they left off in their own district match-up Thursday against Chaminade-Madonna. Baez says his team is looking to redeem themselves from their district loss to Miami Country Day last Friday.

“You don’t want to be 0-2 in this district,” Baez said. “I think these guys know they should’ve won that game, and there should be no reason why they can’t go out there and do what they did today to get a win tomorrow.”