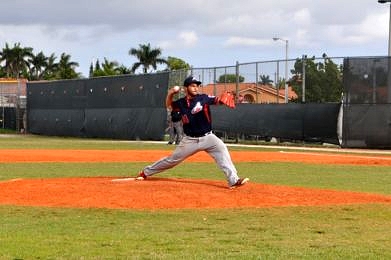 The stage was set at Hialeah Gardens as junior pitcher Jonathon Poldo took the mound for the American Patriots Tuesday afternoon. He led them to a 15-4 win over the Gladiators in the first match up for District 9A-13 of the season.

The right-handed Poldo pitched five-and-a-third innings for the Patriots, but his pitching was not the only thing that kept this team going. Defensively, the Patriots were constant.

“I was happy to rely on my defense this game. They kept me going and encouraged me to do better and as the innings progressed I just felt myself doing better and better.” Poldo said.

Hialeah Gardens Gladiator right-handed pitcher Marcos Ruiz kept a battle of the pitchers going within the in the first four innings. Allowing only four runs, Ruiz truly brought the heat for the Gladiators and made it one tough match up. Keeping the score close at points was due to their defensive strengths, but defensive skills were not the only key to the Patriots’ success.

After the game was primarily tied up, the Patriots took a 10-3 lead over the Gladiators in the fifth. Senior third baseman Juan Anderson came up to the plate and hit a pop fly double, which brought Jose Gonzalez home. Remaining on second base for only a moment, Anderson made it home thanks to the next batter, Joel Deleon, who hit a line drive between third and second base to bring in two runs. After a handful of players took their base, Gonzalez returned to the plate with a double down the third base line that cleared the loaded bases and pushed the Patriots’ lead to seven runs to finish out the inning. 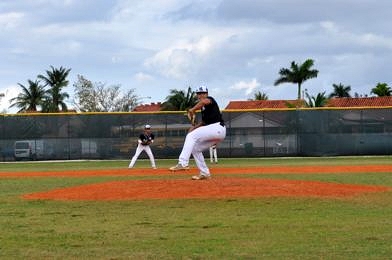 Senior right-handed pitcher Marcos Ruiz had an impressive day on the mound.

The Gladiators responded as runner Javier Manganelly took advantage of home being unguarded and stole home bringing in a run for the Gladiators.

The Patriots’ offensive success did not finish in the fifth inning. They went on to score two more in the sixth off a line drive hit in between second and third base by senior center fielder Luis Alliegro, finishing off the sixth inning with a lead of 12-4 over the Gladiators. They added three more runs in the top of the seventh to finish the scoring.

“Our defense and our speed were a great strength for us today,” said American manager Corey Estrada. I appreciate that my guys come ready to player every day and don’t take anyone lightly.”