Belen Jesuit Walks Off With Game Of The Week Victory 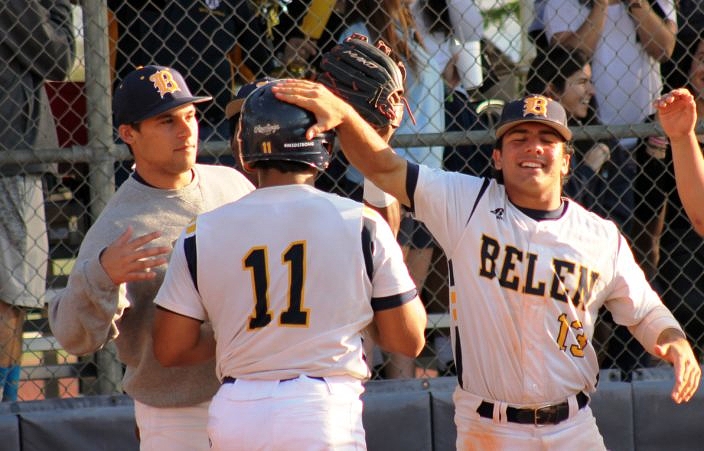 The Wolverines celebrate after Humberto Torres’ solo home run in the fourth inning.

The Belen Jesuit Wolverines have been hungry for a spark that might jump-start their season. Following a shaky start, the host Wolverines came into Friday’s HSBN Game of the Week hoping to erase some demons and get a winning streak started. Following a late rally, the Wolverines walked off with a 6-5 victory over Gulliver Prep to win their second game in a row.

Belen also won for the first time in five tries in the HSBN featured game, including a loss to Gulliver in a Game of the Week back in 2014. The Wolverines (2-3) had gone 0-3-1 previously in the HSBN spotlight, but rallied for two runs in the seventh to finally write the ending they wanted.

“It’s nice to win. It was a wacky game but we needed something,” Belen Jesuit manager Jerry Albert said. “We needed something like this, even if it didn’t necessarily need to be that dramatic. But we definitely needed to win a game, so for us it does feel good that we actually won a game. We don’t worry about our record and we book a very challenging schedule, but we do that for a reason because we want to be in good games all year long. Gulliver has terrific talent and it’s a good win against a very good team and a very good program that they have over there.”

Down to their final swings and trailing by a run, Belen worked the count to rally back to victory. Dorian Gonzalez walked and then reached safely at second on a fielder’s choice off a sacrifice bunt from Armando Albert. Jonathan Barditch was then hit by a pitch that loaded up the bases, before the Raiders responded by erasing the lead runner on a stolen base attempt.

An arm injury forced an emergency pitching change for the Raiders (3-3), and Belen took advantage of the cold arm. The next three batters all worked deep counts to draw walks, with Humberto Torres tying the game on a free pass and Christian Eiroa finishing things off by working an RBI walk that plated Barditch with the deciding run. 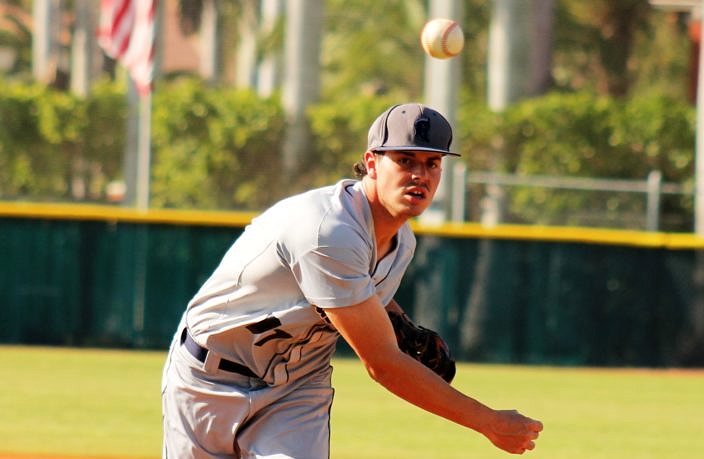 Kevin Maura struck out seven and took the Raiders into the sixth inning, but did not factor in the decision.

“I thought our kids were seeing the ball pretty good, especially at the top of the lineup,” Coach Albert said. “Some of them hit the ball very hard but right at people more in the middle of the game, and you have to see the ball well and be disciplined up there at the plate to work walks out. It’s funny, because we were kind of annoyed that we weren’t getting enough walks as a team and we were being undisciplined at the plate. So we focused on making sure we get the right pitch to hit in the right count.”

Early on it was the Raiders that had the right pitches landing where they wanted, as they jumped to a 5-0 lead after two innings of play. The first two batters of the game both reached and scored to get it going, as Jacob Marcos was hit by a pitch and scored on an error and Ryan Kaufman chopped a single high over the third baseman’s head before later scoring on an RBI from Lucas Costello.

Costello helped keep things going in the second with another RBI single that went for Gulliver’s final run of the ball game. Amin Hassan was hit by a pitch and Marcos singled to left to start the inning, before Adrian DelCastillo sent both runners across the plate with an RBI single to right. DelCastillo stole third to get within ninety feet of the plate, and then came home easily when Costello laced a single past the shortstop.

The Wolverines might not have been able to come back and win had it not been for the relief pitching. Senior Brenton Mullis tossed four shutout innings of relief, allowing three walks and a hit while piling up eight strikeouts. Alexis Agreda then handled the seventh to earn the win with a scoreless frame.

“Brenton was absolutely fantastic; he couldn’t have pitched any better,” Coach Albert said. “It’s still early in the season and that is why we took him out. But he threw great and he allowed us to come back and make a game of it. Then we went to Agreda, and he has struggled a little bit the last couple of times on the mound, but he had his sinker going and he threw right how we expect him to throw.”

The Wolverines got on the scoreboard to begin their rally thanks to a pair of solo home runs in the third. Barditch led off with a shot to left field and, three batters later, Torres connected on a drive to center.

Two innings later Belen added two more runs to pull within a 5-4 deficit. Joshua Salandy reached with an infield single, advanced off a single from Torres and then scored on a wild pitch. Robert Curbelo then drove a liner deep to center for a sac-fly RBI.