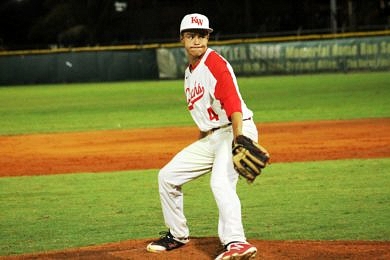 Game of the Week Photo Gallery

Story lines were a plenty on Friday night in Key West. There was the usual boisterous home crowd in attendance. There was the visiting Mater Lakes Academy team that jumped to an early lead and did not seemed fazed by the home crowd. There was the excitement of the game being the HSBN Miami Game of the Week.

And then there was Conchs Manager Ralph Henriquez, pulling all the right strings, and then watching as his Key West team rallied from four runs down to defeat the Bears 10-7 in the first game of the weekend series. The win also just happened to be number 300 for the Conchs manager.

“When you win that many games, it obviously isn’t just about you,” said Henriquez. “There are so many players, and behind the scenes people, that contribute. And, it also means you have to have the support of the community, which we do down here. This win isn’t as much about me, as it is the community down here.”

That community had their patience tested early as Mater Lakes seemed intent on denying Henriquez that 300th win. The Bears scored two runs each in the first two innings, building a 4-0 lead. The big blow coming on a two-run homer off the bat of Adrian Perez in the first.

In the bottom of the third, the Key West bats came alive. The inning started seamlessly for Bears starter Miguel Temes, who got the first two outs with little trouble. An error then opened the door for the Conchs top of the lineup.

Michael Mayor, Brendan Roney, and Wil Anderson all singled, and suddenly the lead was cut in half.

“We were cruising into the third, and obviously the defense struggled a bit in the inning, and the next thing you know they had put five runs on the board,” said Mater Lakes Assistant Alfonso Otero.

Three of those five runs were delivered courtesy of a bases-clearing double down the right-field line by Antonio Knowles.

“I was just looking to help the team,” said Knowles. “We play together as a team, and in that inning, once the error happened, we were able to get the bats going offensively.” 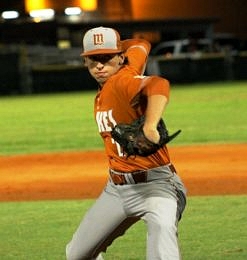 Most teams that travel to Key West would have folded after giving up a four run lead, but not the Bears. In the top of the fourth, Mater Lakes took the lead back with three runs.

Austin Palacios and Xavier Acosta were hit by pitches, and Bastyan Hernandez walked, loading the bases. Palacios scored on a wild pitch, and a fielder’s choice brought in the sixth run. By the end of the inning, the Bears had gone up 7-5.

Key West added a run in the fourth, and then scored two in the fifth, to take a one run lead.

From there, reliever Danny Galvan took over, mixing in his off-speed stuff, and keeping the Bears lineup off balance the rest of the way.

“That’s his job,” said Henriquez. “We use him as a change of pace guy, that has an incredible curve ball and slider.”

For Galvan, it was all about pounding the zone.

“I just wanted to come in and throw strikes,” he said. “I have to be ready to go in and do my job when it’s time, and tonight I was able to do that.”

In the sixth, Wil Anderson delivered the knock-out blow, with a two-run single up the middle.

“Once we got that last hit and went up three, I felt good we would win the game,” said Knowles.

For Key West, it was another in what has already been an early season filled with success. Earlier in the week the Conchs defeated district rival Keys Gate Charter. The team also has a looming district match-up with Gulliver this week.

“We all just want to win,” said Knowles. “We have started strong, but there are still spots that we can get better.” 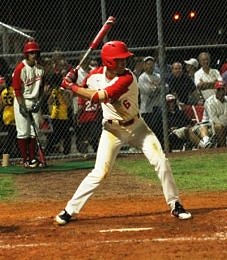 For Mater Lakes, the experience of playing in front of a hostile crowd was just what the doctor ordered.

“We have played real well, and haven’t had much failure,” said Otero. “Even though this is a team we could see down the line in the playoffs, it was worth coming here and preparing for a possible playoff match-up.”

Henriquez agreed that familiarity could play a part down the road.

“A couple weeks in a row we have had teams down here that are in our region,” he said. “I don’t know how these other teams feel, but I know with these notes i keep, it is always better to see the guys we may face later in the season.”

The series between the two teams continues tonight at 7:30.