Mater Academy Races Back To Game Of The Week Victory 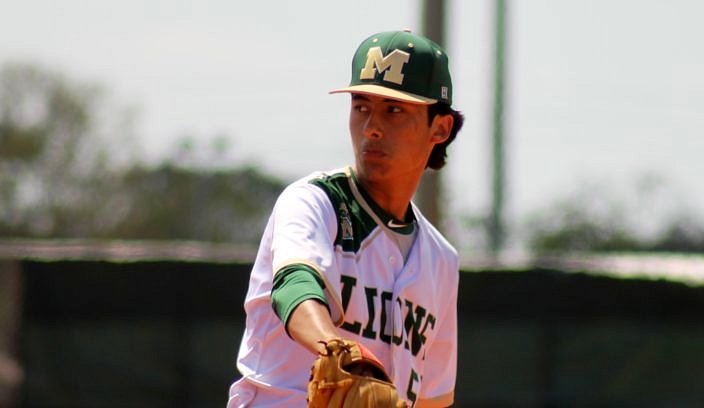 Juan Viviescas earned the win for Mater Academy, allowing one earned run in two relief innings and striking out four.

The two clubs truly embodied the tournament namesake to make it a featured game for the ages. With a large crowd on hand to enjoy the tournament action, the two teams combined for 23 runs on 21 hits. To commemorate the spotlight game, Killian Booster Club President Janet Moorhead threw out the ceremonial first pitch, a high arching pitch that dropped in for a strike. From there on it seemed that anything else that came into the zone was attacked by the hungry hitters.

Luis Diaz ties it up for Mater Academy in the bottom of the first inning. #gotw #hsbnmarchmadness

Mater (6-4) overcame a large deficit with a massive fifth inning in which it scored nine runs and nearly batted around the order twice. All nine starters reached base during the big frame, which was highlighted by a two-RBI single from Ronaldo Naranjo and a two-RBI triple from Alex Aguila. Edgar Quintana had an RBI single up the middle that drove in Aguila, Boris Pena had an RBI single and Frankie Febles drove in a run after being hit by a pitch with the bases loaded.

“Look at it as inertia; when something is moving that way it is just going to keep going that way until something stops it,” Aguila said of the big inning. “That’s just the way our offense works. The goal is the championship, so we’ve got to start it off by winning all these bracket games, so this one feels good.”

Aguila played a huge part in the win. The junior shortstop reached base four times from the top of the order, going 2-for-3 with a double, a triple, three RBIs, two runs and two walks.

“My job is basically just to get on base and to score runs for my team,” Aguila said. “Hard work did this today. Going into every at bat I go with a no-strikeout mentality, so basically swing at every first pitch and stay aggressive. If it’s a ball outside then hit it outside and if it’s a ball inside just pull it and go with the ball.”

Even with the big rally, the way the Cougars also swung the bats suggested no lead was safe. Killian (6-7) got out in front first in the seesaw affair after Romeo Sanabria laced a triple to right field and scored on a wild pitched in the first, and they broke a tie game with a five-run fifth inning that saw them ahead 9-4 heading into the bottom of the fifth. 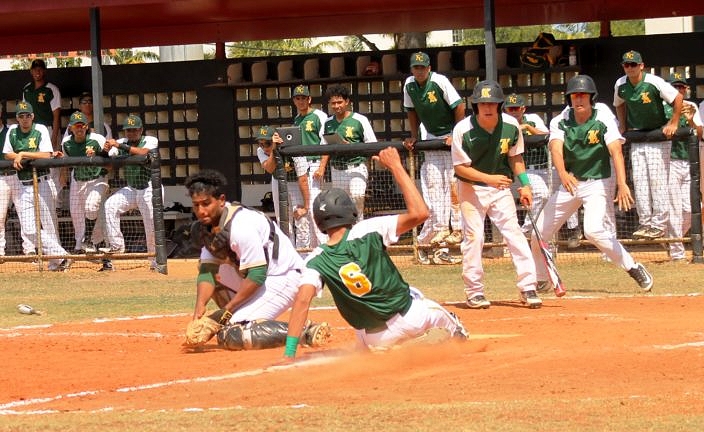 Jorge Corona slides safely across the plate ahead of the throw during Killian’s five-run fifth inning.

“You put a five spot up in the fifth inning and you start thinking you’re going to be all right, and I think any coach is disappointed when you end up in the loss column,” Cougars manager Hernan Adames said. “But the kids swung the bat pretty good. They have acquired pretty good experience in the tough games that we have scheduled, but we had a young ball club come over here against a very good Mater ball club. Our pitching all year has been solid, keeping the ball low in the strike zone, throwing quality pitches in quality situations, and today we got exposed. We weren’t able to execute certain pitches so the hitters felt comfortable in hitters counts and they capitalized.”

After Killian went ahead with its first swings, Mater answered back to take the lead. Aguila worked a lead-off walk to start the bottom of the first, Lewis Menendez also walked and Luis Diaz tied up the game with an RBI single. After Pena walked to load the bases, Naranjo delivered a base hit to right field that drove in two runners for a 3-1 Lions lead.

The Cougars responded right away to retake the lead. Matthew Krtausch doubled to right field and Jose Navarrete followed with a blast to left field for a two-run home run that again tied the score. Cristian Otero then put them ahead when he doubled to center, advanced thanks to a great bunt single from David Pereira and then scored on an error.

Aguila had an RBI double to drive in Pena and inch Mater closer in the fourth, which simply seemed to poke the bear as Killian then immediately responded with their best offensive inning. Romeo Sanabria singled, Kevin Acosta reached on an error and Corona walked to fill the bags. A passed ball brought in a run and Navarette followed with a high infield chop for a base hit that again loaded them up. Cristian Otero was next with a single to center that drove in a pair, before a wild pitch and a passed ball brought in two more.

“These kids are tremendous, and as you heard throughout the game, they are on top of the game,” Adames said. “No matter how much we’re down or up, they’re always pulling for each other. So, as a coach, you don’t want to say much to them in regards to their energy level. We started the year saying trust the process, and we have chances to believe. Even though we lost this game, they believe.”