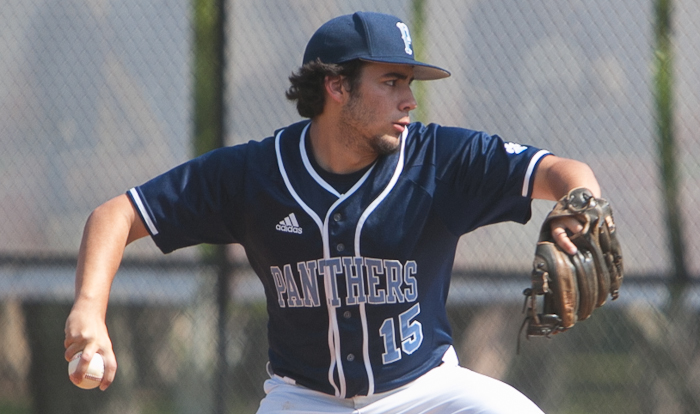 Palmetto pitcher Ryan MacInnes tossed a three-hitter on Tuesday in the Panthers’ 12-2 win over Coral Reef.

Ryan MacInnes tossed a three-hitter and Palmetto slugged 14 hits, including six in an eight-run fifth inning, for a 12-2 win over Coral Reef on Tuesday afternoon in a 9A-16 game played at Coral Reef Park.

The Panthers’ senior right-hander twice retired six straight. He struck out four and did not walk a batter in tossing a five-inning complete game.

“He’s not a real hard thrower, but he’s smart and puts the ball where he wants it,” said Palmetto manager Danny Smith, whose Panthers extended their winning streak to nine games after opening the season with a loss. The Panthers are now 9-1 overall and 6-0 in district play.

“We’re a very good baseball team,” Smith said. “It’s hard to find a flaw. Our hitting is dominating. Our pitching is dominating. This is one of the best teams I’ve coached. We’re playing the game the way it’s supposed to be played. It’s fun to coach.”

Coral Reef slipped to 5-4 overall and 3-3 in the district.

All nine players in the Palmetto starting lineup collected at least one hit. Five of those had two hits apiece, including senior Jarrett Hyder, who hit the first home run of his high school career. It was a solo blast that led off the second inning and extended the Panthers’ lead to 3-0. Hyder drove in another run with a single in the fifth inning and later scored.

“I wasn’t expecting it,” Hyder said of his homer. “It came off the bat really easy.” 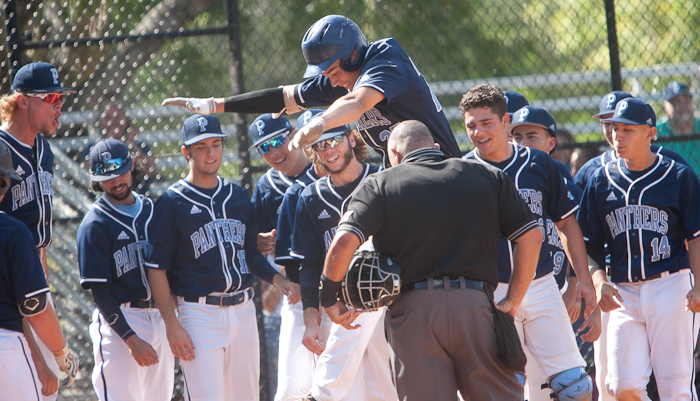 Palmetto senior Jarrett Hyder celebrates after he hit the first home run of his high school career on Tuesday in the Panthers’ 12-2 win over Coral Reef.

Hyder said he first realized his accomplishment rounding first base. It was the result of a realization he came to during batting practice the day before.

“I noticed that it’s not how hard you swing, but how smoothly and the timing of it,” said Hyder.

“We called it in the dugout,” said Palmetto senior middle infielder Branden Abreu. “We knew that with a 3-1 count and the kind of hitter Hyder is, he would hit it hard.”

Abreu went 2-for-3 with a double, three RBIs and two runs scored. He also put down a sacrifice bunt which enabled Panthers’ lead-off hitter Alex Casteneda to move up a base and eventually score.

“I was just looking to do my job,” Abreu said. “Get on base, or move the runners over.” 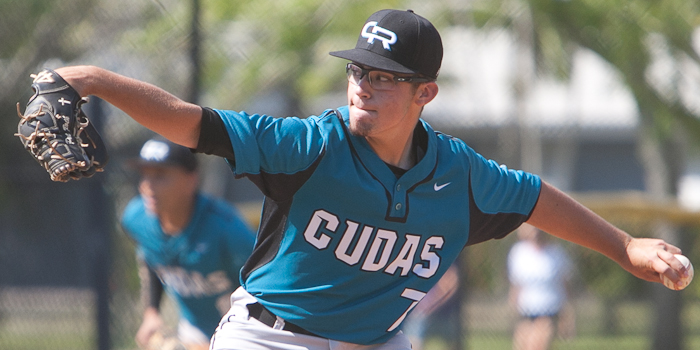 Sophomore Sebastian Jimenez provided Coral Reef with its runs, belting a two-run homer in the fourth inning that cut the Panthers’ lead to 4-2. But Palmetto shortened the game with its fifth-inning fireworks.

“I’m very disappointed,” Coral Reef manager Chris Leon said. “You’ve got to come out and compete and (Palmetto) did that.”