Varela Defeats Keys Gate For Its First Win Of The Season 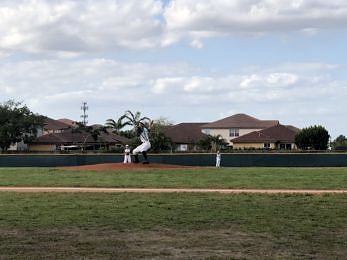 Medina leads the Vipers to their first win of the season

Six runs in the third inning helped lead the Varela Vipers to their first win of the season on Monday, a 10-6 win over the Keys Gate Knights.

The Vipers responded back in the third inning with an impressive offensive performance. After three straight singles the Vipers had the bases loaded, and senior George Gallardo hit another single which brought in a run.

“I felt very good and prepared on the mound and once I got on the mound I was simply ready to go,” George Gallardo said.

Following that, Cristhian Medina had a game-changing, line-drive that went right between second and third base, bringing in three runs for a lead the Vipers (1-3) never surrendered.

“We started off the season a little slow, but I knew we were going to get it going,” Varela manager Carlos Yedo said. “We have a young team and we still have some lessons to learn.”

Medina also started on the mound. The junior right-hander began the game strong, with two strikeouts in the first inning alone. Keys Gate did manage to score a run. 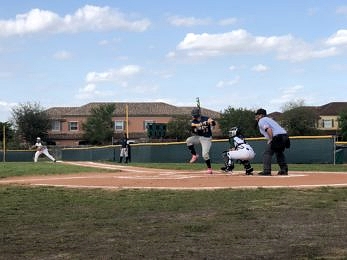 Baldo battling through the great pitching from the Vipers

The Knights quickly responded to the strong inning they had defensively before with an even stronger inning dominating the offensive end. Senior left fielder Adrian Tapia started the momentum off for the Knights with a single to the outfield, which brought junior designated hitter John Ramos with a line drive close to the foul line bringing him to first. From there senior center-fielder Anthony Hernandez got walked and the bases were loaded. Sophomore Rey Hernandez came to the plate prepared to tackle the challenge, as Hernandez hit a pop fly to center field that ended in a double, which brought Tapia and Ramos home.

The Knights were not finished there. Senior catcher Omar Baldo had an RBI, bringing senior right-fielder Issac Paillere home. After a series of walks loaded the bases again, a final walk for junior second basemen Rod Alea helped Hernandez get home for the Knights’ last run of the inning.

Keys Gate (1-5) just wasn’t able to answer back late to get the offense back into it.

The Vipers finished off the game with a short but strong inning, bringing in an additional three runs in the sixth.

“It was the best feeling working together as a team to get our first win,” freshmen second baseman Dylan Vega said.