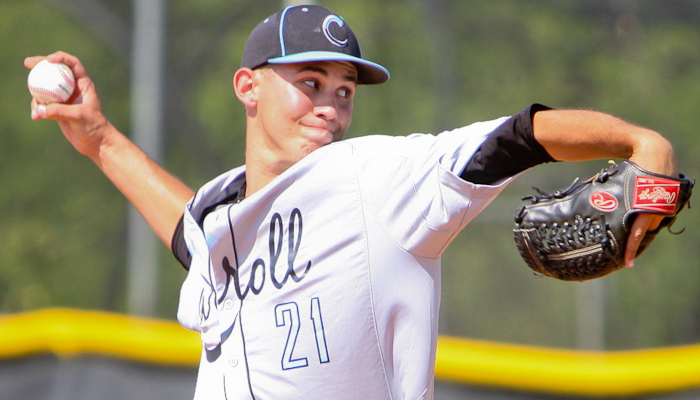 Raul Alvarez fired a two-hit shutout and Kristopher Soto highlighted an 11-hit attack with a two-run homer in a five-run first inning to lift Archbishop Carroll to an 11-0 win over visiting Doctors Charter in a 3A-8 game on Wednesday afternoon.

Alvarez struck out five and walked four while allowing just one Hawks baserunner past second. Archbishop Carroll improved to 9-6 overall and 5-1 in district play. The Bulldogs are currently in first place in 3A-8, with two district contests remaining on their schedule.

“We started a little slow this season but now we are picking it up,” said Archbishop Carroll manager Servio Borges. “We’re more consistent, but we still have to improve a little more and put our mind on States again.”

Doctors Charter falls to 4-12 overall and 2-3 in district play.

Soto blasted his second home run of the season, after the Bulldogs opened the bottom of the first inning with three consecutive singles. Gabriel Figueroa, Austin Capote and Rey Gonce got the rally started with the three straight hits. Gonce went 3-for-3 with two RBIs and two runs scored. He also stole a base.

“I just go up there and do what I have to do to help the team,” said Gonce, who praised the team from top to bottom on its effort. “It comes down to working and execution.”

The Bulldogs added a run in the third inning to push the lead to 6-0. Zach Sanchez singled and pinch-runner Julian Ramos scored his second of three runs on a single by Anthony DeAngelo.

An inning later the Bulldogs put the game out of reach, sending the same nine batters to the plate in order as they did in the first inning. This time Figueroa started things off with a double, Capote walked, and Gonce followed with an RBI single to make it a 7-0 ball game.

Soto walked, and Sanchez slapped a two-run single that further extended that lead. Gabriel Martinez delivered a run-scoring single to increase the lead to double digits. DeAngelo picked up the final RBI, sending Soto home on a fielder’s choice grounder. 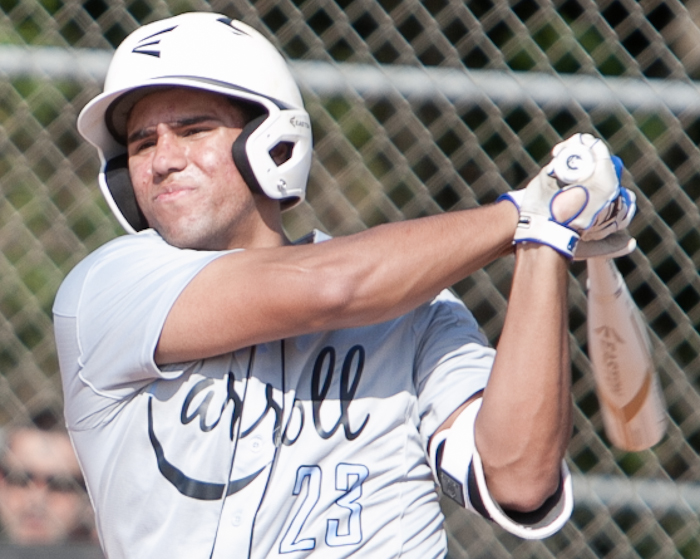 Archbishop Carroll’s Kristopher Soto belted a two-run homer in a five-run first inning to propel the Bulldogs on Wednesday.

It was more than enough offense for Alvarez, who earned his third win of the season and ran his strikeout total for the season to 23.

He yielded just first- and third-inning singles to the Hawks Charlie Calli and David Navarro, respectively.

“We’re by far the youngest team in the district and maybe the county,” said Doctors Charter manager Paul Calli. “The kids haven’t turned the corner, but they don’t understand just how close they are.”