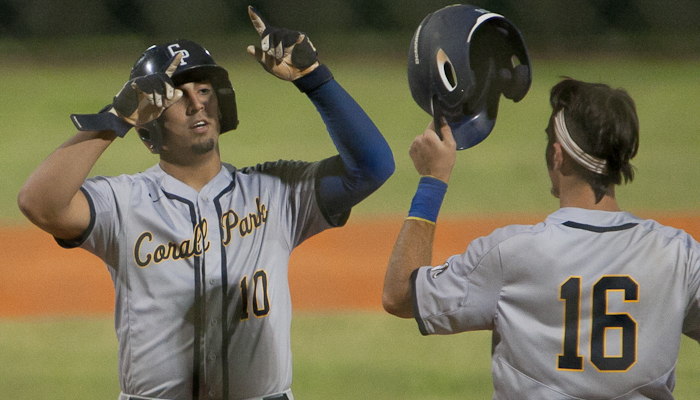 Coral Park senior Bran Socorro is greeted at home plate after his sixth-inning home run to punctuate the Rams’ 12-1 win at Miami Beach on Monday.

Bran Socorro blasted a two-run home run and Coral Park scored nine runs over its final two set of at-bats to run away with a 12-1 win over host Miami Beach in a 9A-14 game Monday night.

After being hit by pitches in his first two trips to the plate, Socorro singled, stole a base and scored the first of five runs in the fifth inning, before igniting a four-run sixth with his fourth home run of the season.

“They were throwing me curveballs the whole night, and got me twice,” said Socorro, who was sitting on a fastball in his final plate appearance and got what he was looking for. “Yeah, I knew it was (a home run) as soon as I hit it. It was a long time coming. I’d gone five or six games since the last one.”

The late-inning heroics opened up what was a close game through four innings. Miami Beach junior right-hander Nolan Santos worked four strong innings, allowing just four hits. But one was a home run by Rams’ first baseman Kevin Castillo to lead off the second inning that broke a scoreless tie.

Santos struck out five, but the Rams added two more runs in the third. After Socorro was plunked a second time, back-to-back RBI doubles by Jordan Rollins and Adrian Rodriguez made it a 3-0 game. 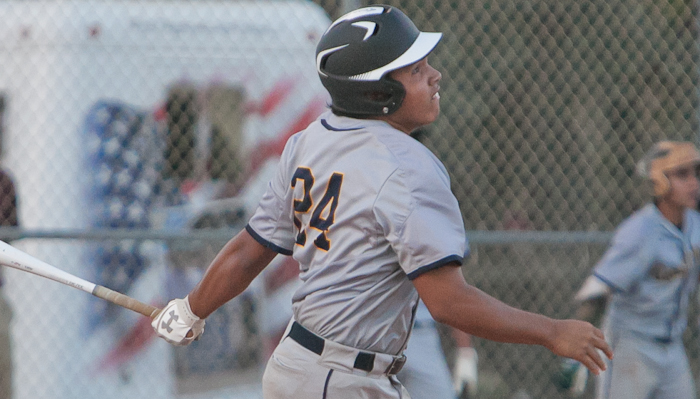 Coral Park’s Kevinn Castillo clubbed a second-inning homer to get the Rams on the scoreboard in their 12-1 win on Monday over Miami Beach.

Miami Beach manager Juan Cordero went to his bullpen, saving his top pitchers for the upcoming district tournament. The Hi-Tides slipped to 11-9 overall and 4-4 in district play.

“This game wasn’t going to change our seeding in the district tournament,” Cordero noted. “So we let (Santos) rest up for it. We faced a good pitcher today; he kept us off balance. You have to tip your hat.”

Coral Park junior right-hander William Silva tossed a gem. He carried a perfect game into the fourth inning and had a one-hitter going with two outs in the sixth and final inning.

That’s when Hi-Tides senior Brandon Perez belted a home run to avert a shutout. Perez had two of his team’s three hits on the night. 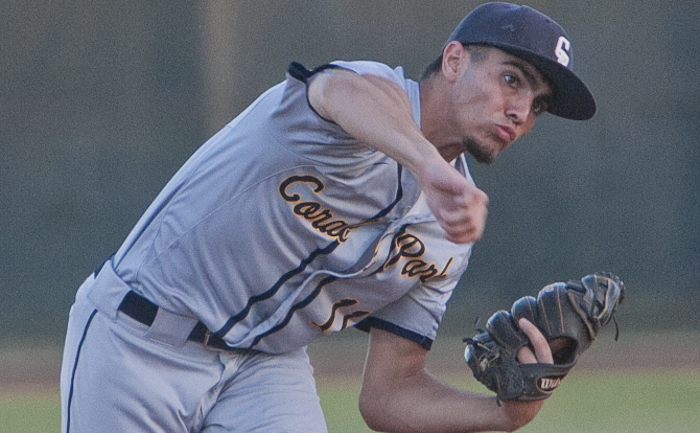 Silva got his seventh strikeout to end the game. He did not walk a batter.

Silva entered the game with a 1.06 ERA and increased his strikeout total for the season to 40.

“That guy’s amazing. He leads this team,” said Socorro.

The Rams (12-7-1) put the game out of reach in the fifth inning. A two-run double by Eduardo Diaz was followed by a two-run single from Justin Dearmas, who piled on with an RBI single in the sixth inning that preceded a run-scoring double by Robert Contreras.