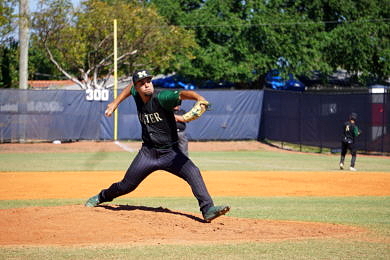 Mater Academy won the battle of the Lions with a 5-0 victory over Chaminade-Madonna Tuesday afternoon, extending its winning streak to seven games.

“Darwin threw extremely well for us today,” said Mater Academy manager Michael DiRosa. “He only had 68 pitches in his five innings of work, and our defense helped him out with a couple double plays.”

Neither team could get on the board early on, as some great defensive plays on both sides kept the game scoreless.

In the top of the second inning, Mater’s Frankie Febles doubled to lead off the inning. Febles attempted to score on a single to left field by Christian Lopez, but a great relay throw by the Chaminade-Madonna defender worked to throw him out at the plate.

It didn’t take long for the Mater offense to threaten again. Alex Aguila and Edgar Quitana led of the top half of the third with back-to-back singles. That was followed by a Lewis Menendez home run to put Mater up 3-0.

“It was a 2-1 count and I know he was going to give me a fastball,” Menendez said. “Last game they didn’t count a home run I hit, so I was actually looking for my first high school home run, and it happened.” 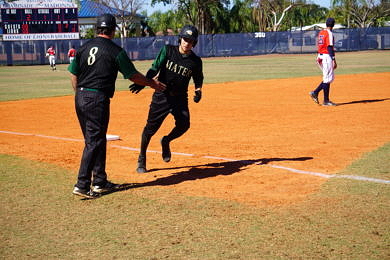 Lewis Menendez Homers to Give Mater Academy the Lead.

Chaminade-Madonna got something cooking in its half of the third with a couple of one-out singles. The rally was cut short by a heads-up double play turned by Mater’s Quintana and Aguila.

Mater got a two-out rally going in the fifth inning to score a couple of insurance runs. Menendez got on with a walk, and then advanced to second on a single by Luis Diaz. Febles followed that with a ground ball, but a sailed throw allowed him to reach base, as Diaz to move to third and Menendez scored. They tallied another run after a balk was called.

Rodas cruised through his first four innings of work, but got into some trouble in the fifth, after Chaminade’s Wyatt Holiday doubled to center and Nico Boza singled to right. The NJIT commit was able to get out of the jam, after picking off a runner and then inducing a weak fly ball for the third out.

“I was excited for this game because I was playing against one of the coaches that helped me commit over the summer,” Rodas said about his mindset coming into the game. “I wanted to make sure I ate well and slept good to be able to be at my best today.”

Alex Ramos came in for Mater Academy, retiring all six batters he faced in order to seal the victory.

“We made a couple of physical errors and a couple of mental errors, but I don’t think the score was indicative to how the game was played,” said Chaminade-Madonna’s manager Jorge Miranda. “We have four games left until districts, and our work from here on out is to clean up those mistakes.”