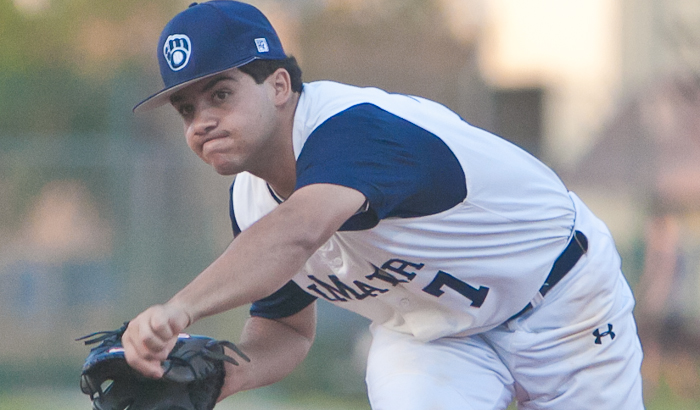 Locked in a pitcher’s duel, I-Mater needed a couple of clutch at-bats from junior Juan Palmero to pull out a 2-0 win over visiting St. Brendan on Tuesday night in a 5A-15 game at Walker Park in Hialeah.

The Knights’ first baseman lifted a sacrifice fly that scored Jonathan Pacin in the second inning, after Pacin walked to open the frame. He then delivered a fourth-inning single – one of just two hits for I-Mater – that scored Albert Sanchez, who was hit by a pitch and moved to second on a balk.

Good contact was the exception in this game, rather than the rule. While St. Brendan right-hander Victor Segura limited the Knights to just two hits while striking out seven and walking two in his six innings of work, I-Mater sophomore lefty Angel Mediavilla tossed a complete-game four-hit shutout, striking out nine – including five straight at one point early in the game – and walked four.

He fought out of a fourth-inning pickle after Steven Diaz started the inning with a double, the first hit off Mediavilla. Consecutive walks to Kevin Martin and Dillon Calero filled the bases with no outs. But the crafty left-hander struck out the next batter, and the Knights turned a double play to end the inning. 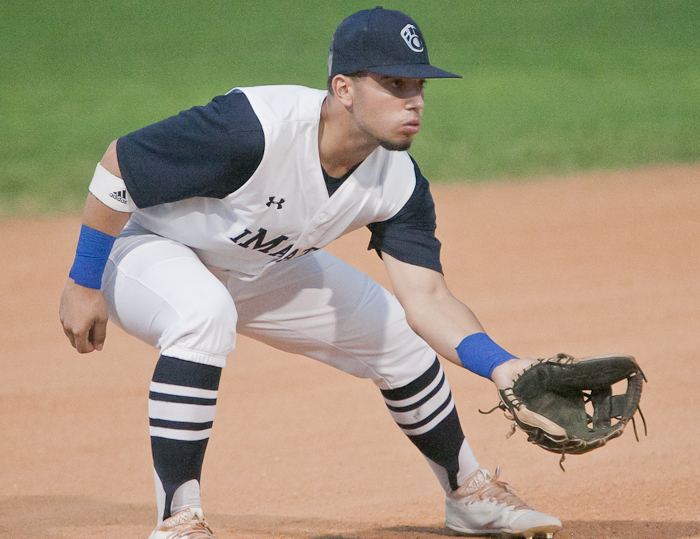 “That’s been the story of our year,” said St. Brendan manager Tito Rodriguez, whose Sabres fell to 6-10 overall and 1-5 in district play. “You’ve got to grind a little bit more than that. You’ve got to execute.”

Mediavilla executed his pitches, especially in key situations. Infield singles by Calero and Matthew Rivero, coupled with a walk to Martin, loaded the bases again for the Sabres in the sixth. But Mediavilla got out of the jam with a strikeout and fly ball to once again end the threat.

“That’s Mediavilla at his finest,” said I-Mater manager Antonio Rodriguez. “He’s a gamer. This was a huge district win. We control our own destiny.”

The big night from Mediavilla could just be the start of many more big outings in the weeks ahead. With an arsenal that only improves with every outing, the Knights know they have a chance whenever he is on the mound. 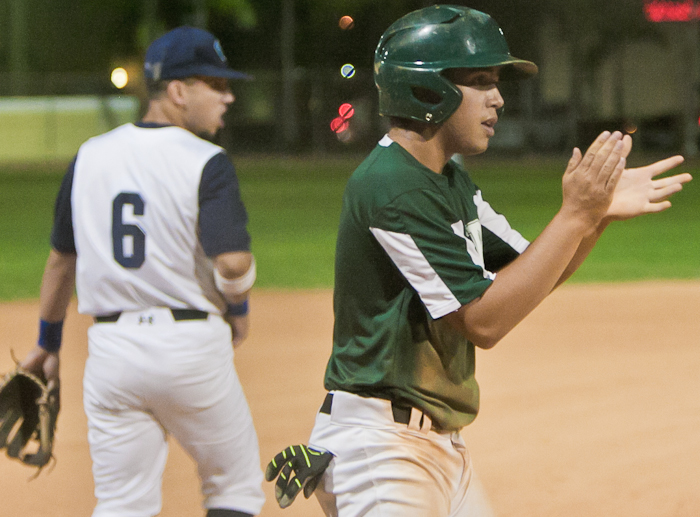 St. Brendan’s Matthew Rivero implores his team to bring him home from third base late in a Tuesday night game with I-Mater.

“I had a good slider tonight,” Mediavilla said. “But I had confidence in all of my pitches. I wanted to keep throwing strikes and trust my defense.”

The Knights played error-free baseball and got an outstanding play from second baseman Christopher Martinez, who was not only involved in the key fourth inning double play, but also came up with a web gem in the sixth as well.

Martinez leaped high and to his left to snag a line drive off the bat of Diaz in the sixth inning that helped prevent the Sabres from making a comeback.