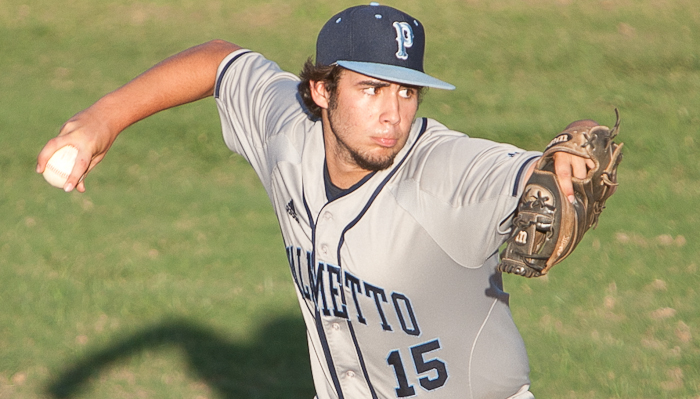 Ryan MacInnes and Jake Sheeder combined on a five-inning no-hitter and the Panthers scored eight runs in the fourth inning to defeat South Dade 10-0 on the road Monday night. The win captures the top seed in 9A-16 for the Panthers, as they look to break the Buccaneers’ three-year stranglehold as district champions.

MacInnes, who entered the game with a miniscule 1.88 ERA, lowered that even more in picking up his sixth win of the season. The senior right-hander worked the first four innings, allowing just one base runner. South Dade’s Ulises Trujillo reached on an error with one out in the second inning.

MacInnes retired the final eight batters he faced before giving way in the fifth inning to Sheeder, who walked one and struck out three in his inning of relief. Neither of South Dade’s two base runners made it past first base.

In complete control throughout, MacInnes commanded all four pitches on Monday.

“My two-seam fastball, I used it to paint some corners,” said MacInnes, who was also pleased with his change up as well. “During warm-up I felt great. I thought I had command of all my pitches. Plus, I love pitching at night.”

The win improved Palmetto (15-2) to an 8-0 district mark. The Panthers own a three-game lead over second-place Coral Reef with only two district games remaining.

South Dade, winners of the last three district titles, falls to 8-9 overall and 4-3 in district play.

“We’ve been battling some injuries on the mound,” said Bucs manager Rene Ruiz. “It’s down to a matter of trying to win two of the next three (to make the playoffs). I haven’t lost hope.” 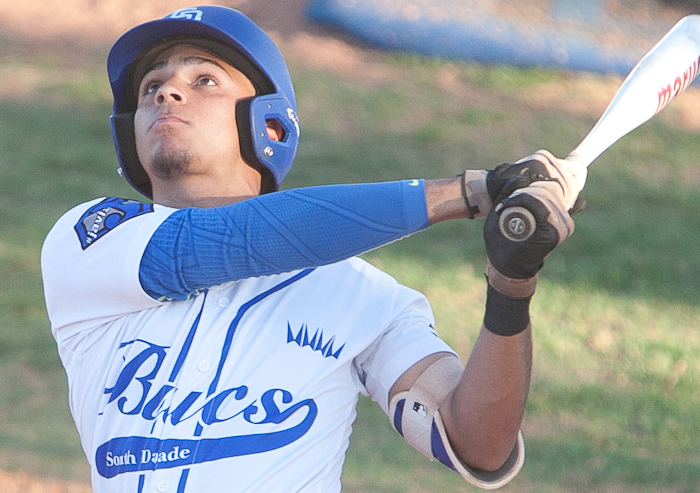 South Dade Buccaneer Daniel Lavoy watches a pop up sail out of play in the first inning of Monday night’s game.

Palmetto broke a scoreless tie with two runs in the third inning, without mustering a base hit. Alex Castaneda was hit by a pitch and later scored on a wild pitch while Branden Abreu reached on an error and scored on a sacrifice fly from Victor Valderrama.

The flood gates opened in the fourth inning. Charles Kavalir drew a bases-loaded walk to produce the first run, before Castaneda and Abreu followed with consecutive RBI singles. Nelson Villa kept the line moving with a two-run single and Valderrama followed with a run-scoring single of his own.

After being hit by a pitch and later scoring to open the inning, Dickson Aburto lifted a sacrifice fly to drive in another run. The Panthers tallied their final marker of the inning when a ground ball off the bat of Kyle Krtausch was misplayed. Krtausch singled and scored in his first plate appearance of the inning. 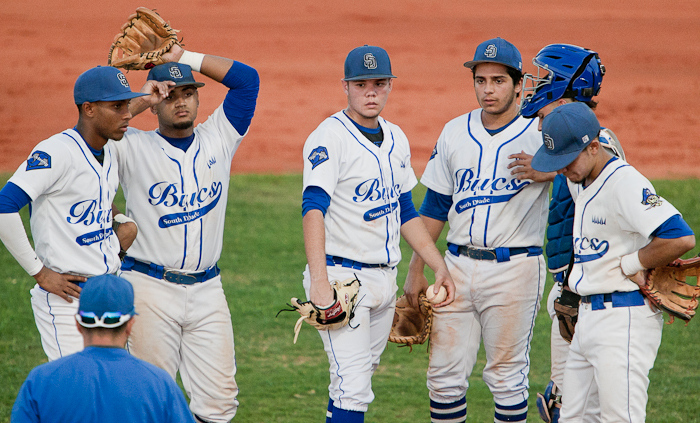 South Dade players gather around the mound for a meeting during Monday’s game.

Up and down the lineup, the Panthers produced.

“This is one of the greatest teams I’ve ever coached,” Smith said of his intelligent, senior-laden squad. “I have eight players with a 4.5 GPA-or-above. This is a smart man’s game. Not only are they good baseball players, but good students as well. This team is special.”