Written by Sebastian Caballero on May 23rd, 2018

A post shared by Doral Academy Firebirds (@doralfirebirdsbaseball) on May 22, 2018 at 1:59pm PDT

For the first time ever, the Doral Academy Firebirds are heading to the state tournament. The Firebirds punched their ticket after a 2-0 win against the Okeechobee Brahmans in the 7A regional final on Tuesday afternoon.

“I’m really happy for the kids and the coaching staff,” Doral Academy manager Ralph Suarez said. “They put in a tremendous amount of time out here, and they deserve to go to the state Final Four.”

Both teams came in with a lot of momentum, as the Firebirds were winners of twelve straight, and Okeechobee defeated a tough Dwyer team and took down their district rival, Martin County, to get there.

Pitching dominated the day, as both teams combined for only seven hits. Okeechobee starter Sean Osceola and Doral starter Adrian Figueroa brought their A-game, keeping the game scoreless through the first two innings.

Doral finally struck in the bottom half of the third. With two outs, Lency Delgado doubled to right field, setting up an RBI opportunity for Gabriel Gutierrez. Gutierrez blasted one over the right-center fence to give Doral a 2-0 lead. I was the only mistake Osceola made all game.

“I was just trying not to strike out and put the ball in play,” Gutierrez said.

That was more than enough for Figueroa, who hasn’t allowed a run in the 15 innings he’s thrown this postseason.

“This is where the good players become great players. Once we hit playoffs this is where it all counts,” Figueroa said of his success. 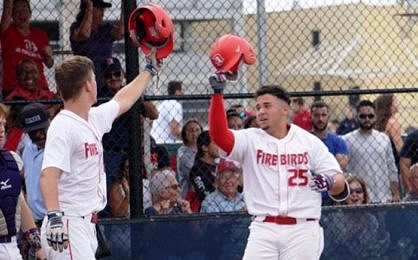 Gabriel Gutierrez launched his 12th home run of the season.

Entering the sixth inning, Figueroa’s pitch count was climbing, and Suarez elected to go to his bullpen. In to shut the door was Victor Cabrera. Cabrera struck out the two batters he faced in the sixth, and talked about his mindset heading into the biggest inning in his young career.

“After seeing what Adrian did, I just tried to do the same; attack the corners and get ahead,” Cabrera said.

Cabrera struck out the first two hitters of the inning. But with two outs, Okeechobee’s Mason Adams shot a double in the gap to keep their season alive.

Unfortunately, that double was all they mustered with their final swings. Cabrera struck out the next hitter to clinch the title and send Doral Academy packing for Fort Myers.