It was an old-fashioned pitcher’s duel that baseball purists really sink their teeth into. Southwest’s Mario Garcia won a 1-0 game on Tuesday night over Ferguson’s Carlos Rodriguez, as the crafty right-handers wrapped themselves up in a tense, well-played 9A-15 semifinal game on the artificial surface of Columbus High.

“He’s kept us in every game this season and he’s pitched against some of the better teams,” said Southwest manager Mandy Pelaez.

The Eagles (15-9-1) earned a spot in the regionals but have their sights set on challenging host Colmbus, a 3-2 winner in the first semifinals game, for the district title. The two get together at 6:30 P.M. Thursday. The winner not only hoists the district flag, but also earns home field advantage for the first two rounds of regionals. 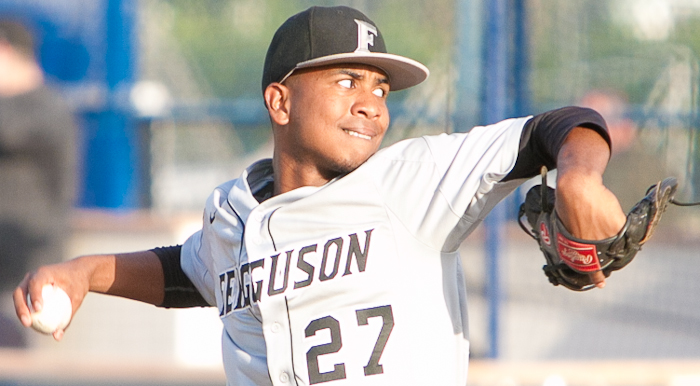 The rivoting semifinals game was won by Southwest in the fourth inning. Eddie Sierra lined a single, one of six Eagles hits – all singles – scoring Damian Alfonso, who reached on a one-out single and moved into scoring position on a wild pitch.

“It came down to one swing,” said Pelaez. “That’s baseball.”

It is if you have a dominant pitcher like Garcia, who threw a two-hit complete game, striking out five. His only walk was intentional.

“I went out and did it for the seniors,” said Garcia, a junior, who had command of nearly every pitch he threw. “I felt good warming up. So I went into the game pretty confident.”

Ferguson leadoff hitter Matthew Corpas was the only Falcon hitter to have success against Garcia, going 2-for-3 with a pair of singles.

But Ferguson (13-10) was able to advance a base runner past first base only once in the game. That was Ronny Medina, who reached on a fielder’s choice and stole second.

Outside of that, Garcia was untouchable.

“He’s a great pitcher, you have to tip your cap,” said Ferguson manager Bryan Morgado. “Our pitchers did an outstanding job, too.” 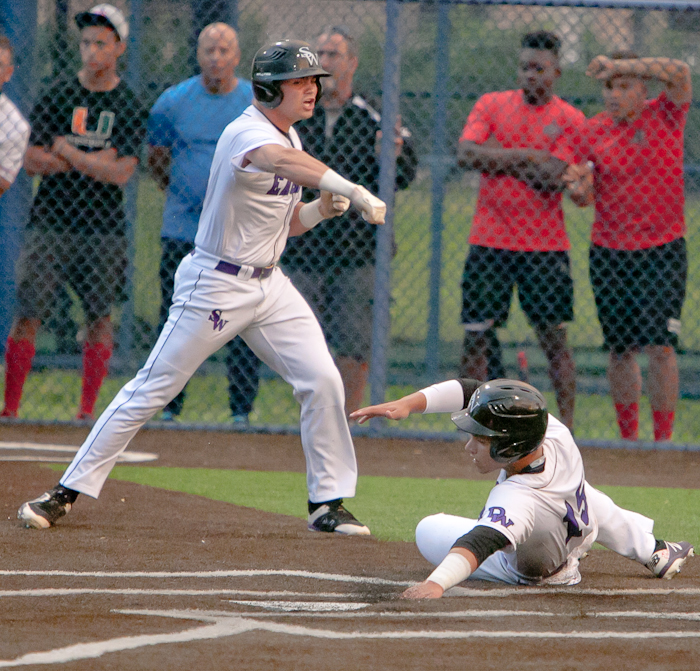 Southwest’s Damian Alfonso scores the only run of the game in a 1-0 victory over Ferguson on Tuesday.

Rodriguez went five-and-two-third innings, striking out six and walking four. Medina came on in the sixth inning to put out a fire, retiring both batters he faced – one by strikeout – with runners at first and second.

“We had our ups and downs this season but overall I think we’re going forward in the program,” Morgado said, summing up the 2018 season.

So, it’s Southwest and Columbus, the district’s top two seeds going head-to-head for all the 9A-15 marbles.

“We’re not finished yet,” said Pelaez.