Written by Sebastian Caballero on May 2nd, 2018 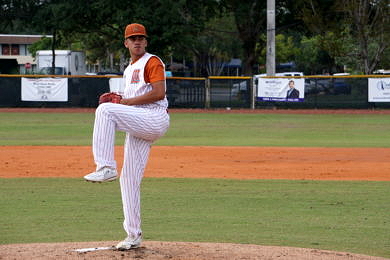 Mater Lakes topped i-Mater 3-0, thanks to senior ace, Ruddy Gomez, who threw a no-hitter for the Bears on Tuesday afternoon.

Not only was this the third time that these teams faced each other, but it was also the third time both Gomez and Knights ace James Montoya went head-to-head this season. i-Mater had come up short in their first two meetings, but the Knights hoped a third time around would bring a different outcome.

Gomez had other ideas.

“It’s hard to beat a team three times. Those two guys have been going at it since sophomore year,” Bears manager Ceaser Temes said about the pitching matchup. “The three games this year were decided by three runs or less, so it’s been great ball games, but we’ve come out on top.”

Montoya pitched well, throwing a complete game with nine strikeouts, despite having a shaky first inning.

In the bottom of the first, Andy Martin and Adrian Mella both reached on errors to start things in their side of the inning. After a sacrifice bunt to advance the runners by Adrian Perez, Martin scored on a wild pitch to make it 1-0 in favor of the Bears. Montoya regrouped after that and stopped the bleeding there.

That lone run was more than enough for Gomez, as the Knights offense could not get anything going off of him.

The Bears found some offensive struggles themselves, as Montoya tried to keep his team in it. 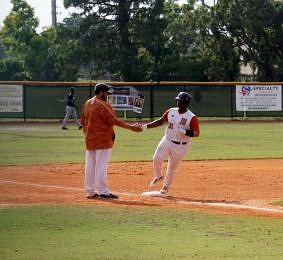 Denzel Hernandez Hit His Second HR of the Year.

Finally, in the bottom of the fourth inning, Denzel Hernandez came up to the plate, and blasted one over the left field fence to give Mater Lakes a 2-0 lead.

“I just wanted to help the team. That was the only thing on my mind,” said the Bears backstop.

Entering the top of the fifth, Gomez admitted he saw the goose egg in the hit column in the Knight line score, but that it didn’t affect him.

“It didn’t really hit me until then, but I got that off my mind and dealt the rest of the way,” said Gomez. “I just wanted to get my team the win.”

Mater Lakes tallied another run on an RBI single by Ysnabi Capote to make it 3-0 heading into the bottom of the seventh.

Gomez got a bit wild to start the top of the seventh, walking the leadoff man, and then hitting the next batter with the pitch to put runners at first and second with no outs. After Temes went out for a mound visit, Gomez was able to strike out the next three hitters to end the game, and complete the no-hitter.

“He dealt, he kept us off balance, and you have to tip your hat off to him at the end of the day,” i-Mater Manager Antonio Rodriguez said.

The season comes to a close for a young i-Mater team, but Rodriguez was proud of his team and the way they fought during the 2018 campaign.

“It was a fun ride,” Rodriguez said. “They fought hard, not just today, but all season long. This obviously wasn’t the result we wanted, but we’re a young team, so they’ll learn.”