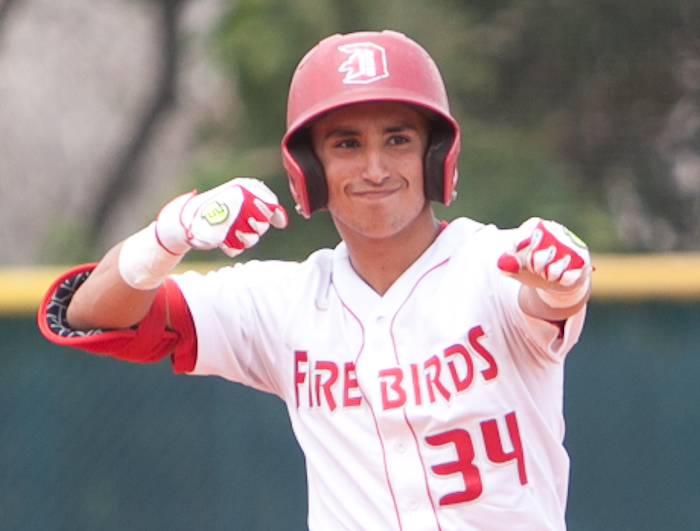 Doral Academy was on target Tuesday in an 11-0 win over Miami Sunset.

Doral Academy played long ball on Tuesday afternoon, belting three home runs in an 11-0 win over Miami Sunset to advance to the 7A-16 district finals on Thursday at Belen Jesuit. The Firebirds will take on TERRA for the district title, after the Wolves defeated Belen Jesuit 4-1 in the other semifinal.

Freshman Gabriel Gutierrez lit the fuse with a solo homer in the first inning. He also doubled and scored in a five-run third that extended the Firebirds’ lead to 7-0.

“I’ve been working with my third base coach and that’s made a big difference,” said Gutierrez, who now has 10 home runs for the season.

He doesn’t even lead the team in that department. That distinction belongs to Lency Delgado, who hammered his 12th homer of the season to lead off the fourth inning.

“The coaching staff has done a great job and it’s paying off,” said Doral manager Ralph Suarez. We’ve done a good job. We’ve spent a lot of time in the weight room.”

Gutierrez said he was more aggressive at the plate last season and has been coached to be more patient and drive the ball.

“Just trying to make contact,” said Gutierrez, who admitted he was trying to hit it out in his first two at-bats, resulting in a home run and a double, but not the last two trips to the plate.

Roberto Leyva ended the game in the bottom of the sixth inning with a two-run homer, his seventh of the season, as Doral Academy improved to 19-6-1. Eight different Firebirds hit safely in an 11-hit attack. Arturo Sardina (2-for-3, 2 RBIs, run) and Nicolas Pitelli (2-for-2, 2 doubles, 2 RBIs) were among the leaders. 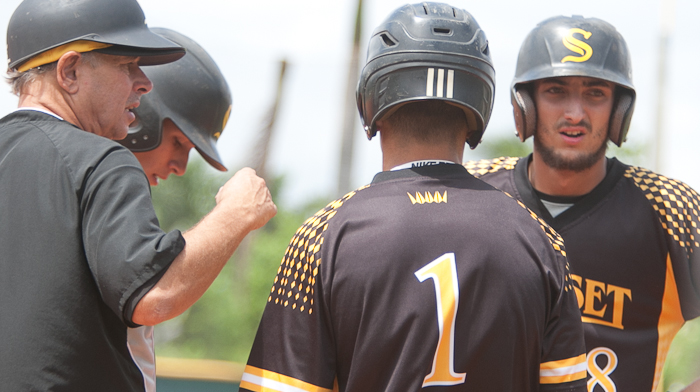 Miami Sunset discusses strategy in an 11-0 loss to Doral Academy on Tuesday.

Winning pitcher Adrian Figueroa walked, doubled and scored twice, and Michael Marin (1-for-1) reached base all three times up and scored two runs. Andres Bordone contributed with a two-run single in the third as the Firebirds took control from the outset.

Figueroa went 4 2/3 innings, allowing five hits – all singles – while striking out eight and walking three. Marin completed the shutout with 1 1/3 scoreless innings of relief. He struck out three and walked one, allowing just one single.

Sunset (15-7) could get nothing going offensively and saw its season come to an end. Luis Rodriguez attempted to light a spark with a pair of singles. He was on base all three times. Colyn Rubio also laced two singles. But neither Rodriguez nor Rubio were advanced past first base.

“We didn’t play ball,” said Knights manager Joseph Marcos, who summed up the season. “Pitching carried us. We had some timely hitting. We’ve got a good crop of freshmen coming up with some pitching there.”