Written by Sebastian Caballero on May 4th, 2018 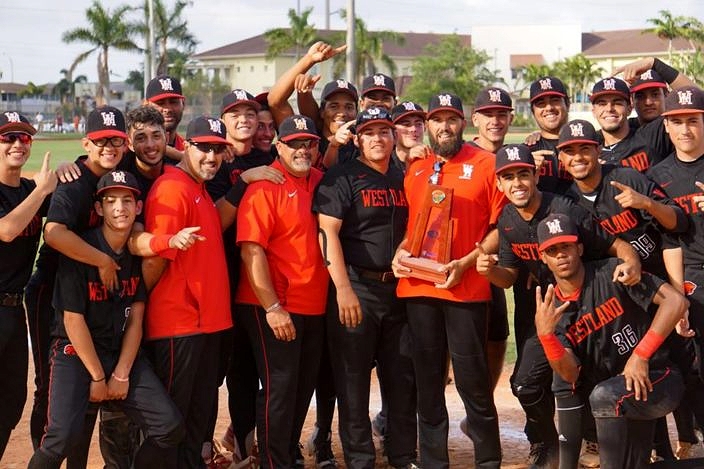 The Westland Wildcats completed the three-peat with a 12-1 against the Mater Academy Lions in Thursday’s 8A-16 championship. These two clubs have met in this game each of the past three seasons, and the Wildcats have emerged victorious each time.

“It feels awesome. It took a while to get this program going, but they’re doing it and they are getting it done,” Wildcats manager Jose Alvarez said. “I could have never have imagined this.”

The scoreboard did not tell the whole story. The first few innings, it was a pitching duel between Westland’s Michael Paez and Mater’s Darwin Rodas. The game remained scoreless until the top of the third, when the Wildcat’ bats came to life. The inning began with a single by Gian Munoz, and then a double by Marlon Cuesta. Both of them scored on Micheal Uz’s RBI double to give the Wildcats a 2-0 lead.

“Hitting is contagious, so we just needed to get those first few runs, and keep it going,” Uz said about their big third inning. 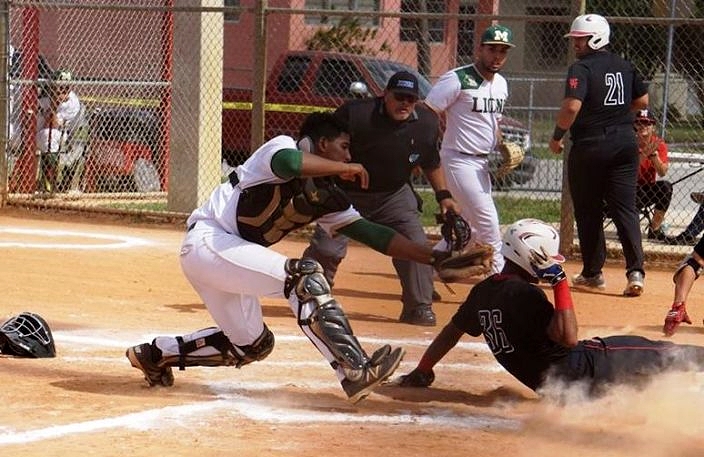 A Wildcat runner slides ahead of the tag.

Westland did not stop, as the Wildcats tallied a few more runs on RBI singles by Robin Fernandez and Angelo Piloto to give them a five-run lead. The Wildcats offense took off again in the top of the sixth inning as they sent 14 men to the plate, in part because of some Lion miscues and base on balls.

On the other side, the Lions offense could not get the ball to bounce their way. Paez and his Wildcats defense kept Mater from getting anything going, as they only allowed one guy to reach scoring position through the first five innings.

“I was just trying to throw strikes and let my defense work,” Paez said. “We were able to turn three doubles plays and get out of jams.”

Mater got something cooking in the bottom of the sixth inning, as Boris Pena leadoff with a double and later scored on a single by Edgar Quintana. That was all they could string together, as the next two men were retired to end the game.

Mater and Westland now enter regional play against the champion and runner up of the 8A-15 District. Should both squads win their quarter final game, they would face each other again in the regional semifinal.