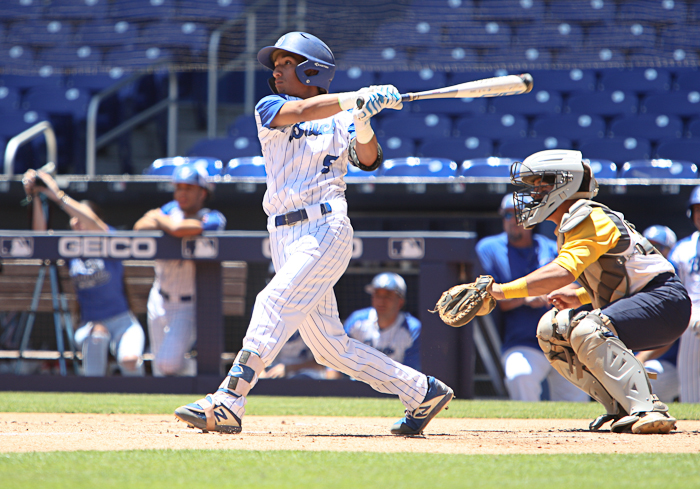 South Dade’s Gabriel Morales lifts a sacrifice fly that drives in a run on Wednesday at Marlins Park.

It’s exciting enough just to have an opportunity to step onto a Major League diamond to play a baseball game. But when you lead your team with two hits, steal a base, score two runs, then go to the mound and earn a save, it’s a memory that will last a lifetime.

That’s what South Dade’s Anthony Artola accomplished in the Buccaneers’ 4-3 non-district win over Keys Gate Charter on Wednesday afternoon at Marlins Park in the HSBN Game of the Week.

Artola displayed the poise of a seasoned veteran both at the plate and on the mound in the Major League ballpark.

“It was a great experience, the boys behind me, I’m very thankful,” Artola said after striking out two in the seventh inning to nail down the victory. “I didn’t expect it to be this nice. It’s a totally different view from the dugout than in the stands.”

Once entering the playing field, Artola said that for the sake of calming his nerves he ran a lap around the outfield.

“The first step onto the field was an experience,” Artola said. “It felt great.”

He singled in the first inning and scored the game’s first run on a double by Henry Alfonso.

“I came to the plate confident,” Artola said. (Keys Gate Charter pitcher Frank Fernandez) started our second batter with a curveball. I was expecting a curveball, especially hitting in the 3 hole. I got a curveball and hit it up.”

His second hit was a perfectly placed bunt that he beat out.

“Third baseman was playing deep,” Artola said. “I run pretty fast, laid it down third, was able to be safe at first.”

He then stole second and scored when Chris Gonzalez drew a bases-loaded walk to lift the Bucs to a 3-0 lead. 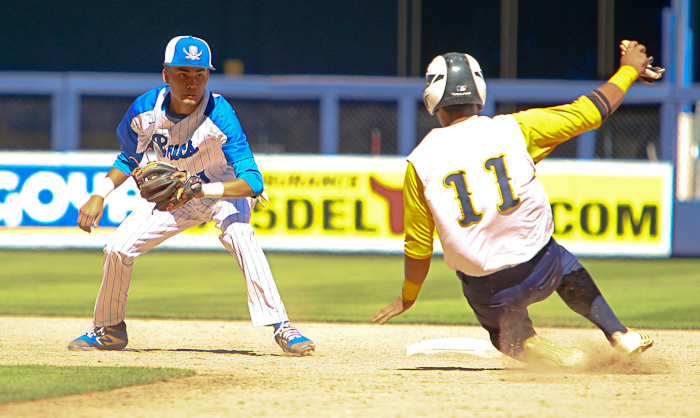 Wednesday’s game at Marlins Park was a close game highlighted by some close plays.

But the Knights scratched their way back with single runs in the fourth, fifth and sixth innings to make it a one-run game and Artola was called on in the bottom of the seventh to close it out for South Dade, now 10-10 for the season. Artola was one of six Buccaneers’ pitchers to make their way to the mound. Six Keys Gate Charter pitchers also took to the Marlins Park mound.

“I was more excited and confident to come in,” Artola said of his save opportunity. “I knew I was going to get the job and had to throw strikes.”

He did just that, striking out two batters in his inning of work.

“When I stepped on the mound it was a really, really good feeling,” Artola said. “I felt something in my stomach, a little nervous, but it was a great feeling overall.”

That sentiment was echoed by Keys Gate Charter’s Rod Alea, who had two hits and scored a run.

“It was awesome,” Alea said of the experience. “With summer ball we play in minor league facilities but never at the big stadium. I want to thank HSBN for providing us with the opportunity to come out here and play,” said Alea, who admitted to being a little awestruck. “You see all the seats,” he said. “It kind of drives us to want to play harder to make it back (as a Major Leaguer). Hitting in the cages, everything is top-notch. It was incredible.”

If he felt the nerves, it certainly didn’t show in his performance.

“It was a little nerve-wracking, all the seats, knowing kids from school were going to come out,” Alea said. “But once the game started it was just like another baseball game.”

The Knights equaled South Dade’s hit total of nine. Like Artola, Alea’s second hit was a bunt single. And just like his counterpart, Alea finished with two singles, stole a base and scored twice.

“We’ve been hitting really well lately and I just stuck with the team approach,” Alea said. “My first at-bat I kind of got away from it. My second at-bat just went right to it (hit) a line drive (single) and then I bunted one because we needed a runner on and I got it done.” 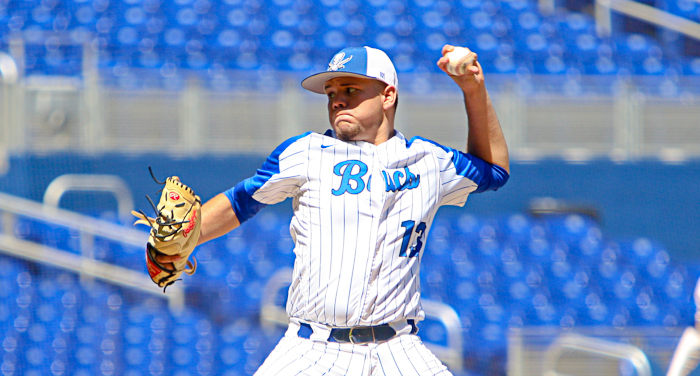 South Dade lefty Nick Sosa was one of six Buccaneers pitchers used in their 4-3 win on Wednesday at Marlins Park.

South Dade’s Christopher Napoles scored twice, once on a sacrifice fly in the second inning by Gabriel Morales, and again in the fifth inning on a single by Felix Franqui that gave the Bucs a 4-1 lead.

“What an experience with this team,” said South Dade manager David Houtz. “We’re loaded with seniors. They worked hard for this. I brought 20 guys, I got all 20 guys in (the game). So that’s what we came here to do. And we got a ‘W’ so that’s even better.”

But not before the Knights pecked away and made a game of it. Abel Riverol delivered a fourth-inning pinch-hit double, scoring Alea with their first run. Fernandez singled an inning later to score Austin Yeber, who doubled. Osvaldo Sene made it a one-run game with a sixth-inning RBI single

“It was once in a lifetime for a lot of these kids,” said Keys Gate Charter manager Rich Benavides, whose Knights slipped to 7-11. “We’ve been trying to do it for the last four or five years and finally got to do it. It was a blast, had a lot of fun. I know they did, from the moment they go here they had their phones out taking pictures.”

The final score was secondary to the overall experience for both teams.

“We made a couple of mistakes early to give away some runs but it was a well-contested game,” Benavides said. “We got everyone in the game. I’d rather have that kind of game than just have nine kids play and everybody else watch, because this is about the experience.”