Doral Stays Unbeaten In District With 8-1 Win Over TERRA 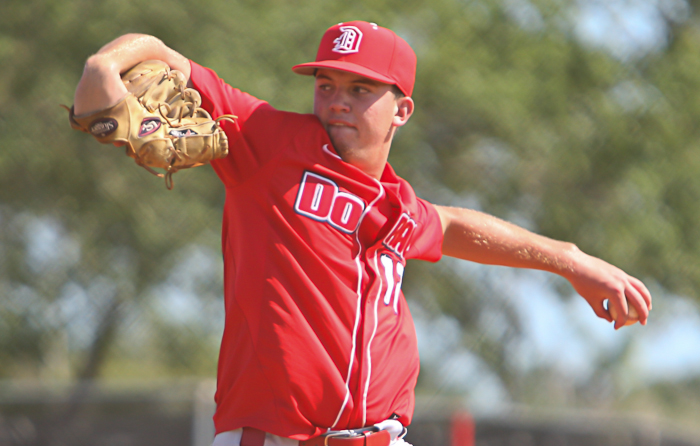 Doral Academy brought its bats to Kendall Indian Hammocks Park on Thursday afternoon, banged out 12 hits including a home run, and remained atop the 7A-16 standings with a methodical 8-1 win over TERRA.

“Before the game we talked about pounding the strike zone and we’re going to have success; put the ball in play and let the defense work,” said Figueroa.

The win lifts the Firebirds to 4-0 in district play and 13-3 for the season, easing the pain of losing three of four games on a recent road trip to the prestigious Dessert Classic in Las Vegas, NV.

“We’ve played extremely well,” Doral manager Ralph Suarez said. “We had a little hiccup over there on the West Coast. But for the most part our pitching has been very good all year long. Hitting is starting to get a little better. And we’ve still got a ways to go.

“This is probably the best schedule that I’ve ever played in 30 years. We’ve seen about eight Division I pitchers. We see everybody’s No. 1.”

Ranked No. 3 in the Miami-Dade Power Rankings, Doral faces another huge test tomorrow against IMG Academy.

“If we can get a win tomorrow we’ll have a chance to play Calvary (No.1 in the state) and Westminster (No. 1 in Miami Dade), they’re ranked ahead of us right now, and shoot us right back in the mix if we do what we’re supposed to do.”

The Firebirds took care of business on Thursday, sparked by a three-run homer from Abner Benitez in the second inning.

“He threw me three straight sliders,” said Benitez. “He threw me the first one, I was way out in front. So I said, ‘O.K. I’ve got to stay back.’ He threw me the second one, he beat me. Once he threw that third one, my eyes just lit up and I just took a hack at it.” 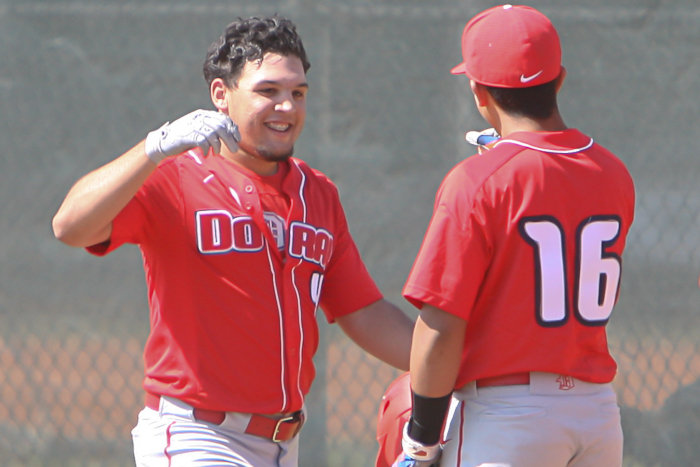 Doral’s Abner Benitez is congratulated after his three-run homer in the second inning. Benitez drove in four runs and scored three in the Firebirds’ 8-1 win over TERRA on Thursday.

“I didn’t think he was going to throw anything in the zone with two strikes, but I was ready to hit the whole time,” said Benitz, who walked in both the fourth and sixth innings, scoring each time, before closing the scoring with a run-scoring single in the seventh to pace a team he said he couldn’t be happier with.

“I love this team,” Benitez said. “The energy here, everybody gets along, it’s just wonderful. I love the coaches, I love the players, I love the school, it’s amazing.”

Xavier Moronta drove in three runs and Dominic Pitelli scored twice. Gabriel Gutierrez added one RBI while Nicolas Pitelli had two hits and scored a run. Matthew Corpas and Figueroa delivered two hits apiece. The Firebirds produced up and down the lineup.

“They’re a good team, said TERRA manager Jorge Robles, who saw his Wolves commit a couple of costly errors and fall to 2-3 in district play and 8-6 overall. “When you give four or five outs to a good team, you’re not going to beat them. That’s the bottom line. They came through with men on base and we didn’t.” 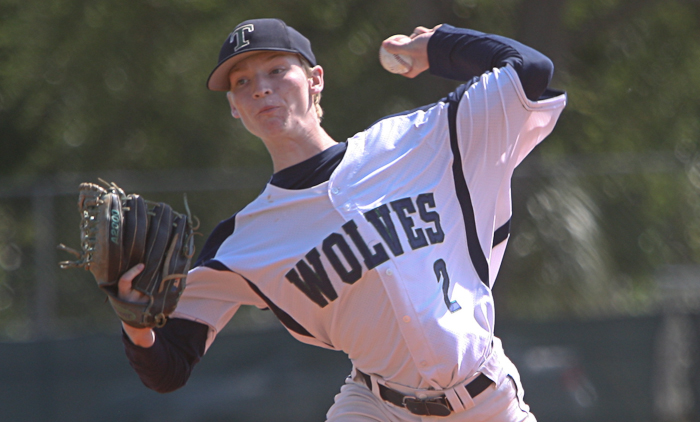 Wolves’ first baseman Angel Gutierrez accounted for his team’s lone run with his first home run of the season, a solo blast in the fourth inning.

“I was on a two-strike approach,” said Gutierrez. “I got down two strikes and my mentality was not to hit a home run. It was just my mechanics to stay on top of the ball. He was throwing from up top, so I knew he was coming down.

“I couldn’t get under it, all I was thinking was to get on base, put the ball on the ground. And it ended up being something better. I was just reading it and reacting to whatever happened.”

Figueroa said he left a change up high and Gutierrez took advantage of it.

“That’s the only hitter that got a good piece off me today,” Figueroa said. “But overall, it was a pretty good performance.” 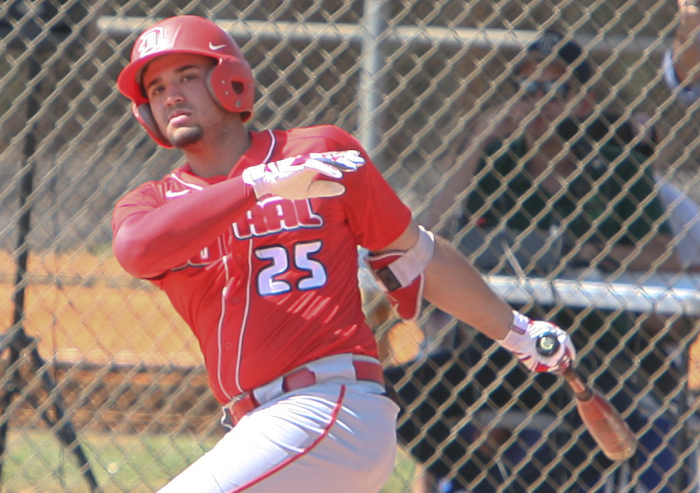 Doral’s Gabriel Gutierrez singled and drove in a run during the Firebirds’ 8-1 win over TERRA.

Gutierrez said that he wasn’t sure the ball would get out of the park when he hit it.

“It felt good off the bat, but since the wind was blowing in I didn’t think it would be gone,” he said. “So I kept on hustling around (the bases) and once I saw it go over, that’s when I started trotting.”

Ian Labrador had two of TERRA’s five hits, both singles.